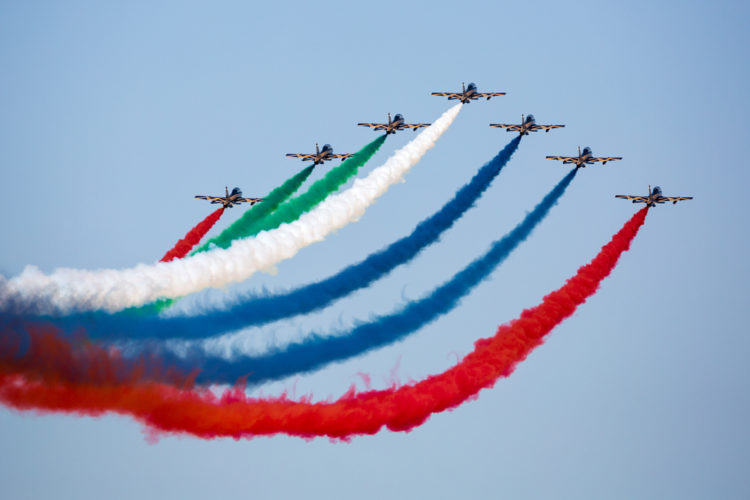 If you Google the best airshow you should visit, you will not find Dubai Airshow on the list. While most people attend airshows to admire the aerobatics demonstration, the Dubai Airshow is not open to the public. You must be an industry professional to attend; a business card may be needed to prove your eligibility. The strictness is because it is during this show that billions of dollars of deals are sealed; hence, only serious people should grace the event. The show has evolved since its start, and below are the changes it has undergone throughout its history.

It Started as Arab Air

According to Rostec, the first Dubai Airshow began as Arab Air in 1986. It was only a small aviation exhibition hosted at the Dubai World Trade Center and organized by F&E. It was established because of the increased regional focus on the aviation industry. In 1989, it changed the name to Dubai Airshow as more investments in the Middle East military and civil aviation sparked its growth. Consequently, unlike before, when it could comfortably be hosted at the Dubai World Trade Center, the event had to be held at the Dubai International Airport. It covered about 7,000 square meters, which provided enough space for 25 aircraft. There was also a large hall spacious for the 200 exhibitors. Since then, it has been held after every two years, and it seems that each event is usually bigger and better than the last. The event is also hosted under the patronage of the Vice President and Prime Minister of the United Arab Emirates and the Ruler of Dubai, UAE Armed Forces, Dubai Civil Aviation, Dubai World Central, and Dubai Airports.

By 1991, the show was already bigger than the 1989 event. It had previously been held in January. Since the Gulf war outbreak, the event is held in November. Furthermore, it shifted to having a strong military focus. The growth continued over the years to the extent of having a new exhibition center, the Airport Expo, in 1999 to accommodate the many exhibitors. Even the September 9, 2001 attacks could not slow down its growth; therefore, it closed that year’s edition with a confirmed order intake worth $15.6 billion. According to Khaleej Times, the 2003 event became the fastest-selling in the history of Dubai Airshow, at the time because it attracted 550 companies from 36 countries.

By 2007, when the 10th Dubai Airshow was held, it had cemented its place in the aerospace by becoming one of the top events worldwide. Records were smashed; during this show, the most lucrative deals were recorded. At $155 billion-dollar deals, the record was the highest at the time for any aviation event. The proof of its growth was not just in the billion-dollar deals but also the increased number of exhibitors. By 2009, 890 exhibitors from 47 countries attended the event. Not even the financial crisis experienced in 2008 could affect the show.

According to SP’s Aviation, by 2011, the Middle Eastern economy had bounced back from the slowed growth. While the West experienced an economic recession, the Middle East was peaking. Therefore, the year recorded deals worth over $63 billion deals. The number of exhibitors increased to 960 from 50 countries. Also, over 56,548 trade visitors attended the show held from November 13 to November 17, 2011. Among the many deals that went down in the 12th Dubai Airshow was a $26 billion order between Emirates Airlines and Boeing for 50 Boeing 777-300 ER; the airline even had an option of additional 20 aircraft. Rolls Royce, on the other hand, bagged an order from Saudi Arabian airlines. It would provide TotalCare support and engines for four Airbus craft; the deal was worth $500 million.

Other Changes Since Its Inception

In 2014, F&E Aerospace, the event organizer, chose Jetex as the host FBO (Fixed-base operator). Jetex would provide towing and pushback to all show aircraft and a VIP lounge for passengers and crew. In 2015, the Dubai Airshow was expected to break all records. According to AIN Online, it would be bigger and better than ever before. The 2015 event featured over 1,100 exhibitors from Europe, America, and Middle East. Before the show, F&E Aerospace projected that it would attract 65,000 visitors, 5,000 more than those who had attended the 2013 show. It attracted first-time exhibitors such as Martin Aircraft Company and the UAE Space Agency.

The F&E Aerospace managing director said that the addition of the UAE Space Agency to the exhibitor list brought another dimension to the Dubai Airshow. She reasoned that the UAE’s investment in space technology had reached at least $5.4 billion, facilitating the growth of the global space industry. The expected increase in exhibitors during the 2017 event resulted in the hall being expanded by 10,000 square meters since the 45,000 square meters available during the 2015 edition were already fully booked. In 2019, Emirates distinguished itself by spending $25 billion to increase its fleets by 80 jets, although the deal had been negotiated for years.

The COVID-19 pandemic may have slowed down the economy for the last two years, but the Dubai Airshow remains unaffected. According to Trade Arabia, the 2021 edition would be the biggest since the show started in 1989. Indeed, it was because the five-day event featured over 1,200 exhibitors from 148 countries. They comprised 200 first-time companies, 80 startups, and over 160 aircraft on display. The event saw the participation of military and defense hardware from Russia, Israel, and the US. Since Israel and UAE normalized their diplomatic ties in 2020, Israel displayed its hardware for the first at the 2021 edition. However, while we had become accustomed to multi-billion orders for widebodies, narrow-body aircraft and low-cost carriers dominated this year’s Dubai Airshow. Perhaps, it is a sign that the event will continue evolving as needs and preferences change.