Home
Business
Sports
How Much Does it Cost to Attend a Los Angeles Chargers Game?
Prev Article Next Article 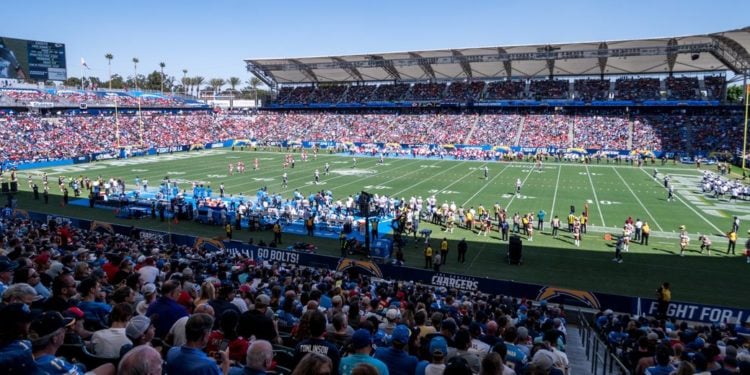 So, you’re interested in going to watch a Los Angeles Chargers game. That’s great, but you might not think it’s so great after you find out how much it’s likely to cost you. Chances are, you probably expect it to be a fair amount of money. After all, most NFL games are not exactly cheap. That being said, it’s getting harder and harder for people to find the disposable income necessary to pay for things like this, especially when you consider the fact that most people are spending more than 70 percent of their income on things like housing, utilities and food. When all things are considered, that doesn’t exactly leave a lot of extra money to have fun. That means that you have to budget wisely and it also means you need to know exactly how much you will end up spending if you decide to go to a game.

As is usually the case, you’re not just looking at ticket prices, although those prices can vary widely in this particular example. It’s also important to know how much you’re going to spend on items that you might not even think of initially. Are you going to purchase any souvenirs because if you are, that’s going to be an entirely different category and it will cost you a lot of money. Even if you forget about the souvenirs and make a stop or two by the concession stand, you might have a mild case of sticker shock by the time it’s all said and done. Keep in mind, none of this even includes parking. As you can see, things can start to add up very quickly.

The Only Constant with Ticket Prices is the Lack of Consistency

In some cases, stadiums make a habit out of creating a certain price point for seats, providing you with an opportunity to purchase seats that are more economical or you can choose a nicer seating arrangement that costs more money. Other stadiums operate on a slightly different system, and this is the one used by the Los Angeles Chargers. Instead of having regular ticket prices, the prices vary based on the game being played. In other words, you might pay $70 per seat for a game against the Arizona Cardinals or as much as $500 per seat for a game against the Denver Broncos. In addition, there are several packages available where you can purchase seats for multiple games and get a discount, but you end up getting stuck with higher prices if you’re purchasing tickets for one game only. This makes it extremely difficult to know exactly how much you’re going to end up spending. In this particular case, your best bet is to figure out exactly which game you’re interested in attending and then visit the team’s website in order to get a more exact price. If you’re looking for an estimate, you could be spending anywhere from $125 to almost $600 for a single seat.

Are You Really That Hungry?

It probably doesn’t come as a very big surprise that it costs more money to attend a Los Angeles Chargers game, simply for the fact that it’s in Los Angeles. California is one of the more expensive states in the country, and it’s not just where housing is concerned. The truth is, virtually everything costs more money. This also applies to attending a football game. If you’re hungry, it wouldn’t take a lot for you to drop as much as $65 on the concession stand. You don’t even have to eat a lot in order to reach this amount of money. In fact, it’s virtually impossible to eat anything at the concession stand for less than $35. If you haven’t eaten before the game, you’re probably going to do one of two things. You’ll either get very hungry before the game ends or you’ll end up spending a lot of money on food, possibly as much as $100 per person. If you’re looking for a way to save money, you might decide to eat before you get there.

Parking is Pricey Too

Like most other cities, the parking at this stadium is something of a nightmare. If you manage to get a parking spot, it can cost you as much as $40. The bigger issue is that in most cases, you won’t find a parking spot to begin with. It really is best to stick with public transportation here. That also means that you won’t have to worry about dealing with the crazy traffic.

If you’re still interested in attending a game, you probably realize that it’s time to start saving up now. If you get serious about it, you just might have enough money socked away to attend a game next season.