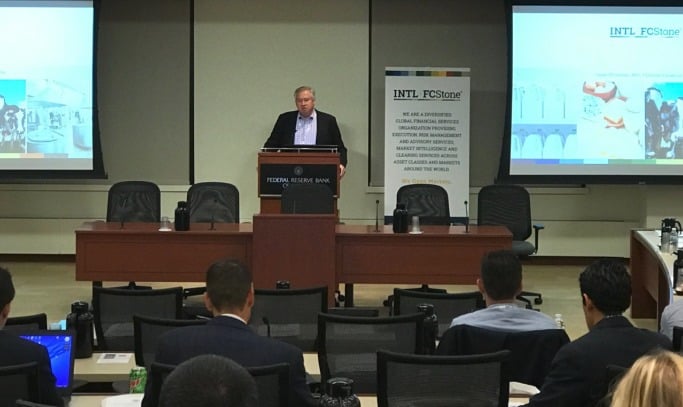 INTL FCStone is a company that offers financial advice and trading options to other businesses. They are ranked on the Fortune 500 and are considered to be one of the most successful businesses in this type of industry. Their main focus is metals but they also trade in several other markets including energy, securities and renewable fuels. Smaller businesses are able to start trading on these markets because of the entry that they are given by INTL FCStone. They are a well established company but here are ten things that you may not know about their CEO Sean O’Connor.

Sean O’Connor joined the company as CEO in 2002 and also took a place on the board around the same time. The company did not have as many interests as it does now at this time and one of the main things that he wanted to do was grow the company and expand. This has been one of the longest roles that he has held throughout his career which shows that he is committed to the company.

He became company president in 2015 when the existing post holder retired. This also saw a reshuffle of the executive posts within the company that saw others also take on new roles. This shake up has proven to be successful and the company has continued to grow in this time.

3. He Was Also CEO Of Standard New York Securities

Before he came to INTL FCStone he held the position of CEO at Standard New York Securities. This is part of the Standard Bank corporation and gave Sean O’Connor a lot of experience in a number of different areas in the financial industry. He also worked in a number of different financial markets throughout the world as part of this role which gave him invaluable experience.

4. He Makes Over $1 Million Each Year

The amount of money that Sean O’Connor makes from INTL FCStone each year exceeds $1 million. This total includes his salary, bonuses and shares in the company that he is given as part of his role. There are CEO’s that are earning far more than this in the United States but it is still a very generous salary.

5. He Was Educated In South Africa

Both of the universities that Sean O’Connor attended are located in South Africa. These are the University of Cape Town and the University of Stellenbosch. The subjects that he studied here helped shape his future career.

6. He Is Based In The New York Office

INTL FCStone has offices all over the world but Sean O’Connor is based in the New York office. He has a suite of offices which he uses as his base. All of the executives of the company are based at the New York office and this is considered to be the center of operations.

7. He Is A Very Private Person

There is not much information available about Sean O’Connors private life because he likes to keep this information to himself. He is married with children but prefers to keep his family out of the spotlight. All contact that he has with the media goes through his office rather than any personal contact numbers or email addresses.

8. His Two Positions Within INTL FCStone Complement Each Other Well

The board made the decision to make Sean O’Connor president as well as CEO because they believed that this would work well for the company. His positions create a link between the board and the employees which helps the business to run more effectively. The board have a first hand insight into what they need to do to make the lives of employees easier and how this can be put into practice.

9. Employees Speak Positively Of Him

It is fairly common for employees to leave online reviews for the places that they work. There are people that enjoy working at INTL FCStone and those who don’t but even negative reviews still rate Sean O’Connor highly in his position as CEO. You do not always find this in all financial service business as sometimes people can feel that the leaders do not care about the people working beneath them.

10. The Company Consistently Performs Well On The Stock Exchange

The leadership that Sean O’Connor provides means that the company is consistently growing on an annual basis. This is reflected in their performance on the stock exchange where their share price consistently rises. This helps attract new investment into the company as their shares are well sought after because people have a lot of confidence in them.