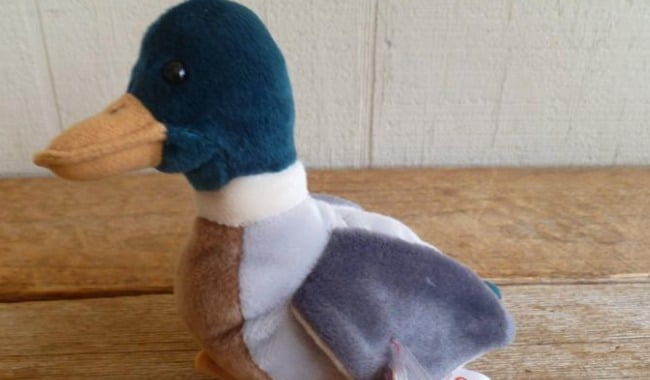 Jake the Mallard Duck is one of the Beanie Babies that came out in the late 1990s. Appearance-wise, he is exactly what he sounds like, meaning that interested individuals can recognize him by the contrast between his green head and his gray and brown body. Nowadays, Jake the Mallard Duck can’t be counted among the most valuable Beanie Babies that can be found out there, but he is nonetheless capable of fetching sizable sums in the high hundreds.

How Did Beanie Babies Become So Popular?

On the whole, Jake the Mallard Duck is a neat reminder of when the Beanie Babies were the biggest fad that could be found in North America. For those who are unfamiliar, the Beanie Babies are a line of stuffed toys produced by Ty Inc., which are unusual in that they have been under-stuffed using plastic pellets for the purpose of creating a more flexible and thus a more realistic feel to them. Besides this, it should be mentioned that most Beanie Babies come with both a swing tag and a tush tag, which are made out of paper and cloth respectively. Both swing tags and tush tags have undergone considerable changes over time, meaning that it is possible for interested individuals to gauge the general age of a Beanie Baby based on them. Something that matters because older generations tend to be more valuable generations, though there are exceptions to this particular rule.

In any case, Beanie Babies started up in 1993, but it wasn’t until the second half of the 1990s that they reached the height of their popularity. The stuffed toys benefited to a considerable extent from pure luck. However, it is important to note that there was plenty of cold calculation behind their success as well.

For starters, Beanie Babies were sold at the low price of just $5 rather than something higher. Yes, this eliminated one of the simplest and most straightforward methods for raising their seeming value in the eyes of interested individuals. However, in exchange, it produced a huge expansion in the number of people who might be interested in Beanie Babies. After all, $5 meant that just about everyone could participate in the buying of Beanie Babies, thus making for that much more potential enthusiasm coming from that many more potential sources.

On top of this, there was a very deliberate sales strategy to create the impression that the Beanie Babies that people were interested in wouldn’t always be around, thus creating further incentive for them to make a move sooner rather than later. In part, this consisted of the manufacturer putting serious limits on the number of Beanie Babies that could be purchased by retailers for further resale, which created the misleading impression that they were perpetually on the verge of being sold out. However, it should also be noted that the manufacturer cultivated a very tight-lipped business culture about what Beanie Babies would coming out, how long those Beanie Babies would be available to interested individuals, and other relevant information. Something that enabled it to create a sense of uncertainty in consumers that further encouraged them to make their moves as soon as possible rather than wait until later when they could lose their chance to snap up the Beanie Babies that they had their eyes upon. With that said, the master stroke might be how the manufacturer decided to retire Beanie Babies after a relatively short period of availability, which was what really provided that sense of urgency with its metaphorical teeth.

What Causes Such Trends to Emerge?

The result was a huge interest in Beanie Babies that resulted in numerous actions by numerous people that can look very strange to people with no such enthusiasm of their own. Something that has since come to a conclusion with the cooling of enthusiasm in the late 1990s. There are still people making Beanie Babies and people buying Beanie Babies, but there are no longer a lot of people who will go to extraordinary lengths to get their hands on Beanie Babies because that kind of overpowering enthusiasm just isn’t there anymore.

Unfortunately, the Beanie Babies craze isn’t particularly uncommon. After all, chances are good that interested individuals will have seen more than one example of said phenomenon. In fact, it should be mentioned the Pokemon franchise went through something similar in the late 1990s and early 2000s, which was followed by a second such bout of enthusiasm in much more recent times with the release of Pokemon Go. On top of this, it should be mentioned that this kind of enthusiasm isn’t even limited to modern times with modern marketing to whip up consumer enthusiasm. For proof, look no further than the fact that the Dutch Republic became obsessed with tulips for a period of two years in the relatively early 17th century, which became so excessive that single bulbs were sometimes capable of selling for ten times the annual income of skilled craftspeople.

Regardless, what is important is that interested individuals prevent themselves from getting too carried away when it comes to such trends. There is no harm to partaking in them when everything is done in moderation. However, that changes when people start letting their enthusiasm get out of control, which can have devastating consequences for their finances as well as other important aspects of their lives. Suffice to say that there were a surprising number of people who sank thousands and thousands of dollars into Beanie Babies at the height of their popularity, which wholly unsurprisingly, proved to be a terrible idea in hindsight.