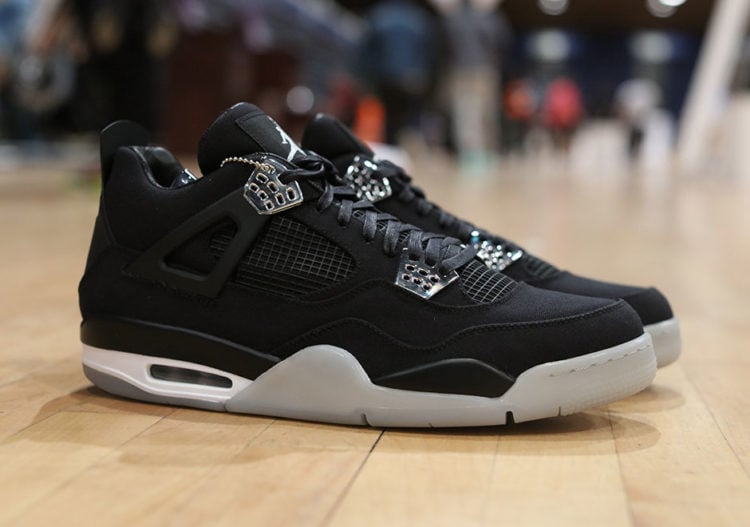 In 2015, hip-hop legend Eminem teamed up with Nike and Jordan Brand to release the Jordan 4 Eminem x Carhartt – a celebratory tribute to the 15th anniversary of Eminem’s breakthrough third studio album, The Marshall Mathers LP. The milestone moment in musical history found its perfect match in the sneaker, which, since its release, has become as popular as the album itself… although, admittedly, way more expensive.

The Love Story of Eminem and Nike

The Detroit born rapper is one of Nike’s most devoted fans- if you catch him without a pair clamped to his feet, there’s a 99% chance he’s either in bed or in the bath. His love of the brand has led to some of the most coveted Air Jordan releases of all time- the EMINEM x Air Jordan 4 “Encore”, the ‘Way I Am’ AJIIs, and the Jordan 4 Eminem x Carhartt. The Air Jordan 4 “Encore” represented one of the first celebrity collaborations for Air Jordan– but by no means the last. Since “Encore”, the brand had drafted in the likes of Vashtie Kola (the first female collaborator), the Portland art trio Undertow, U.K. artist Dave White, Don C, Craig Stecyk, Macklemore, Lance Mountain and Nicki Minaj to help sustain the popularity of their retro offerings and add some hype (and value) to their limited edition runs.

The 2015 Jordan 4 Eminem x Carhartt wasn’t the first collaboration between Eminem and Nike. In 2005, the Detroit rapper hooked up with the brand to create the EMINEM x Air Jordan 4. That time around, the special edition blue, red and black sneakers were a tribute to Encore, the singer’s fifth studio album released on November 12 the previous year. The sneakers were released on a limited edition run- and when we say limited, we mean LIMITED. The whole world and his mother may have wanted a pair, but only 50 of Eminem’s inner circle actually got their hands on one. Fortunately for sneakerheads, some of those friends and family members clearly prefer cash over shoes- while rare, you may occasionally see a pair of pre-worn sneakers pop up on eBay. If you do, grab them quick- they’re unlikely to stick around. Although as a heads up, don’t expect to get much change from $25000. If you’ve got cash to burn and can’t bear the thought of sneakers that have touched another person’s tootsies, you might even be lucky enough to find yourself a pair of as-new, fresh- from- the box babies- but be warned, the last time a pair became available, they retailed for a bank breaking $70,000 .

By 2015, neither Eminem’s nor Nike’s popularity had waned. Perfect timing, then, for a re-working of their 2005 classic. Joining the mix this time was Carhartt, the US apparel company known for its rugged collection of work-wear and for sharing the same Michigan background as the Detroit-born Eminem.

Simple in design, the sneaker featured a color pallet of black, white and chrome. Adding some interest to the otherwise monochrome scheme was Em’s trademark hockey mask and backwards “E” on the heel. Dual Carhartt and Jordan branding featured behind the tongue, while Eminem’s branding featured on the sole. Chrome eyelets, flashes of silver, leather inners, an insole bearing the Slim Shady Records logo and a full Black Carhartt leather upper completed the look.

The hotly anticipated sneakers were once again released in limited edition… but this time, they were available to the public. According to SoleCollector, a rumored 333 pairs of the coveted shoes were made. The 333 is believed to be a homage to Detroit’s area code. Of these, 10 were released exclusively through eBay, with all proceeds from the sale going to Eminem’s charity of choice, the Marshall Mathers Foundation, a worthy endeavor that provides assistance to disadvantaged and at-risk kids in Detroit and its surrounding areas. After a couple of false starts and delays (apparently caused by Eminem’s team needing to get themselves prepared for a “higher than anticipated demand,” the sneakers finally hit eBay in mid-November 2015. While bidding was open to international bidders, only those that had gone through a pre-qualification process were allowed to participate.

Despite the high starting price, fans of sneakers and Eminem dug deep, scouring behind their sofas for the final few cents that would allow them to secure a pair of the rugged black beauties. On average, bidding for the sneakers started at around $10K (although this increased dramatically for larger sizes, with size 11 and 12’s starting at around $16.4K). Final bids reached anything between $18,750 at the lower end of the spectrum and $30,100 at the higher end. Once all the bids had been counted and all the sneakers were in the mail, a final reckoning was done of the money raised. The grand total? According to HighSnobiety, a staggering $227,552, with every cent going straight into the coffers of the Marshall Mathers Foundation Literacy Through Songwriting program. The auction represented the biggest and most profitable of its kind since the 2011 auction of the Nike Mag. During that particular auction, the brand’s collaboration with legendary actor, Michael J. Fox, managed to raise a whopping $5.6 million for the Michael J. Fox Foundation for Parkinson’s Research.

Since all 10 pairs of the coveted sneaker’s got snatched up by trigger-happy eBay fans, sneakerheads the world over haven’t given up hope of coming across a sneaky pair at auction. Now and again, they get lucky – but they’d better have their credit card to hand if they do. Since their release, the desirability of the sneakers has increased to the point that fans of the brand are willing to fork out upwards of $20,000 for a pair… even if they do come with the tag- line “well-worn”. If the idea of putting your feet where a stranger’s have been doesn’t appeal, you may be fortunate enough to find a pair of new ones, but best have a chat with your bank manager before filling in your shipping details- you’ll struggle to find any with an RRP of less than $26,000. Clearly, Nike knows a thing or two about the value of exclusivity…