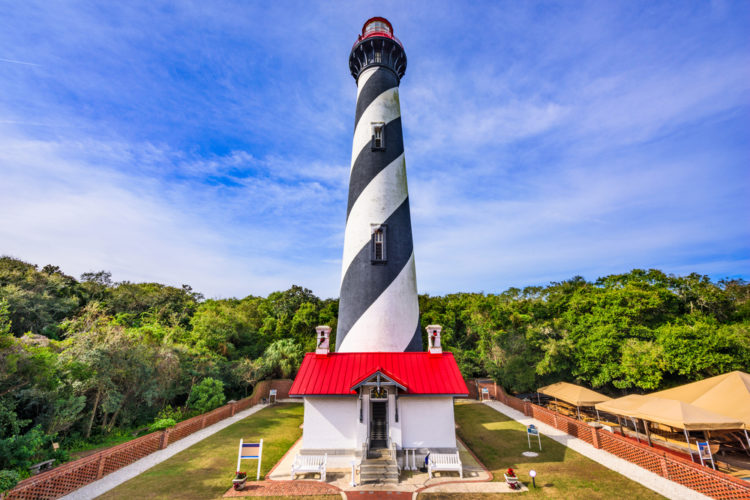 Everyone enjoys doing different things when they visit a new location, depending on their personal tastes and interests. One activity that some vacationers enjoy when taking a break is seeing the local landmarks and unusual architectural features of an area. If you are visiting Florida, then one type of structure you might like to see during your travels is lighthouses. Here are 10 lighthouses you should check out in Florida.

Hillsboro Inlet Lighthouse is one of the most notable lighthouses in Florida, as it boasts one of the strongest lights of any lighthouse in the world. It is possible to see the light from 28 nautical miles away from the coast. This lighthouse is not open to the public all the time as it sits on Coast Guard territory. However, it is open to the public for a guided tour approximately once a month for a fee. If it is open during your visit, it is well worth a visit to learn about the lighthouse’s history and to check out the panoramic views from the top.

Cape Florida Lighthouse is the oldest structure in Miami-Dade, says Florida State Parks. It has survived since 1825, despite an attack by Seminole Native Americans, coastal erosion, many hurricanes, and an explosion caused by gun powder and lantern oil. Although it is now a cultural landmark, its original purpose was to guide sailors around the Florida reef without having an accident. From the top of the lighthouse, there are views of Key Biscayne, the Atlantic Ocean, and Miami Beach.

Saint George Island Lighthouse famously slid into the Gulf of Mexico and then collapsed in 2005. It was then rebuilt in its original simple style in 2008. The lighthouse is a simple white tower with a small window and a black viewing platform at the top. It stands next to a modern house and is surrounded by palm trees. Since the lighthouse was rebuilt, it is open to the public on most days. One of the unique experiences you can enjoy at this lighthouse is climbing to the top to watch the sunset and the moon rise.

One of the most striking features of the Jupiter Inlet Lighthouse is its color. Instead of having a traditional white tower, the main structure is painted a vivid red. Visitors can climb to the top of the lighthouse to see the spectacular views, then visit the lighthouse’s museum. A tour of the museum extends to the outdoors, where there are some fascinating historical exhibits to see.

As its name suggests, the Key West Lighthouse is in Key West, and it is one of Florida’s southernmost city’s most notable landmarks. It is surrounded by some of the area’s top attractions, including The Ernest Hemingway House and Museum. The lighthouse is built in a traditional style, with a white tower and a black observation deck.

Pensacola Lighthouse has a striking and distinctive appearance, as the lower half is painted a traditional white, while the upper section of the structure is painted black. The color choice was not made simply for aesthetics but also for practical purposes. While the white stands out against the surrounding trees, the black stands out from the blue sky. Visitors can climb the lighthouse and visit the attached museum. Some people claim that the lighthouse is haunted, making a visit more exciting for believers of the paranormal.

Budget Travel Buff recommends a visit to Cape Canaveral Lighthouse. It is a striking 151-foot-tall black and white structure that sits behind Kennedy Space Center. The lighthouse was originally built along the coast in 1868 but was then moved inland in 1898 because of coastal erosion. In 1960, the lighthouse became automated, and then it was transferred to the United States Air Force in 2000. There are weekly tours available for a fee, but the three-hour tours are worth taking for the overall experience. Not only do visitors get to see inside the lighthouse, but they also see the Air Force Space and Missile History Center and the launch sites. Furthermore, admission to Port Canaveral’s Exploration Tower is included.

At 175 feet, the Ponce de Leon Lighthouse is the tallest in Florida. It is also worth noting that it is the country’s third-tallest lighthouse. There are 203 steps to climb to reach the top, but the effort is worthwhile to admire the panoramic views. This lighthouse also has a small museum that educates visitors about the lighthouse’s history.

According to Florida Smart, the best lighthouse to visit in Florida is St. Augustine Lighthouse. Saint Augustine is the oldest continuing city in the United States, and its lighthouse has played an important role in the city’s history. It is also one of the city’s top attractions, attracting more than 190,000 visitors each year. In addition to the lighthouse, there is also a museum to visit, predominantly focusing on the history of the lighthouse. However, it also covers other aspects of local maritime history. The exterior of the lighthouse is painted black and white in a spiral pattern. At the base is a small building with a vivid red roof.