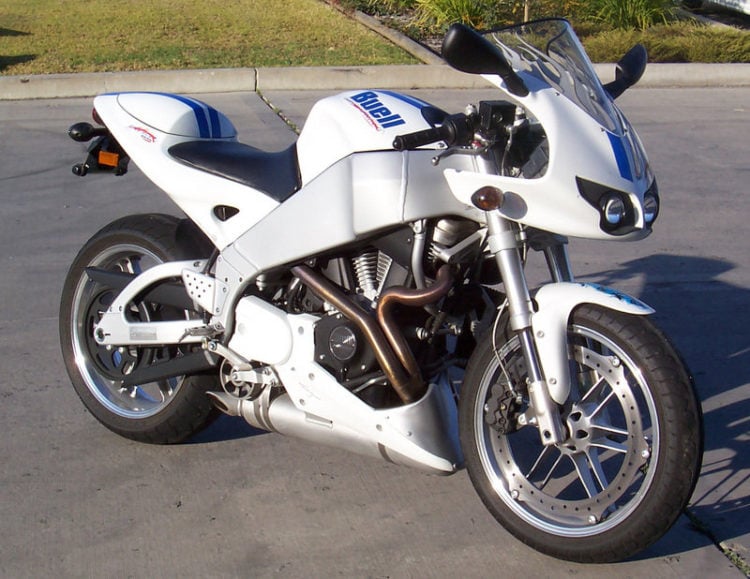 Buell Motorcycles was founded by former Harley-Davidson employee Erik Buell in 1983. Harley-Davidson was the first dealership to sell the brand. It was during one of the downswings that HD decided it was time to shut down Buell, but not before they manufactured 135,000 bikes, many of which are still on the road today. Erik rebounded and the company still releases a limited number of Buell bikes. The Buell XB9Firebolt is one of the less talked about, yet notable models that deserve a closer look.

According to Wikipedia, The XB frame was introduced in 2002 in a sportbike labeled the Firebolt XB9R. This motorcycle was the first and smaller version of the XB that would see a larger displacement in 2004 in the B12R. The XB9 model featured a 984 cc displacement engine with a stroke of 79.38 mm and a bore size of 88.9 mm. Web Bike World, describes the Buell XB9R Firebolt as an excellent sportbike featuring the DNA of a track machine and a design for street-worthiness. The Firebolt was the first of the XB line with a V-twin engine skillfully fit into a small frame with a short wheelbase. It was out for a full year before the larger XB12R was released. The latter with its larger 1,203 displacements was considered to be one of the best street sportbikes ever produced by the brand but the XB9R was not without its merits.

A closer look at the Buell XB9R Firebolt

Motorcyclists Online, takes us through a different perspective for a closer look at the XB9R that highlights the features that make the smaller version of the XB lineup a radically different bike in design, and performance. The reviewers believe that unfair prejudices and biases compare the bike to others when it’s a model that deserves to stand alone and be examined for its merits. They begin with the minutia of the mechanics of the bike. It’s an unconventional sportbike that is an original design that doesn’t imitate any others. It’s equipped with a Milwaukee V-twin torque pump with a 21 degrees of fork angle and 84 mm trail with a unique design that fits a lot of mechanics into a small amount of space, to cut through the technical jargon. Small, yes, but brutish on the race track. The heavier parts of the bike were pushed down near the center in an architecture that creates an exceptional sense of balance. Not a typical design architecture, but one that worked nicely for the XB9R.

The Buell XB9R has a frame made of aluminum-spar that is lightweight. An inverted Showa fork with a light hollow axle carries the front wheel that is a mere 9 pounds. The gas tank features a sealed interior with a small capacity of 3.7 gallons. The roto is a single 375 mm type that, unlike most others, bolts directly to the front rim versus the hub. The XB9R features some strands of the Harley-Davidson XL DNA, however, the majority of the design is from Buell with every effort made to keep the price low and competitive.

Most of the engine components are Firebolt specific from the crankcase and valves to the connecting rods and pistons. Buell borrowed the heads featuring high-flow cylinder designs from NASCAR. The weight of the engine dry is 169, which gives it a lighter weight than the new KTM superlight V-twin by 46 pounds. The total wet weight of the Firebolt is 455 pounds, so it’s evident that it does possess some heavier components, but the key to its success has been in its distribution. When operating in its top gear at 4500 rpm it cruises easily at 75 mph. The engine generates 78 horsepower, which keeps it just a notch below the mainstream as a contender, however, it’s a compact bike with clean styling, loaded with features including two trip meters, mileage on reserve, and an LCD clock with all of the amenities in their proper place.

The Buell XB9R in review

Top Speed, describes the Buell XB9R as a middleweight bike with a snappy engine with upgrades that give the 984 V-twin a power supply of 92 horsepower, an improvement over the first edition with 70 ft. lbs of torque. For its size, it’s a scrappy bike that is made for street riding but it can also handle the track. It was re-engineered for precision handling in an exotic styling for what Top Speed describes as the “ultimate sport-riding experience.” The 2006 version was available with a fluid silver frame, black designer wheels, and a racing red color scheme.

While everyone has their preferences, the Buell XB9R has had its share of fans since its inception. It’s not good when you try to compare a uniquely designed sportbike like the XB9R with similar models from other brands, because it’s like comparing apples with oranges. It’s enough to acknowledge that Buell borrowed a few design features from Harley-Davidson’s XL, along with a few tricks from NASCAR, but for the most part, the design is not a replication or imitation of any other brand’s intellectual material. It’s uniquely Buell. The engineers and design team had their work cut out for them to make everything fit and balance out in this radically different architecture, but they shoehorned the engine and other components in a tightly fitted space, place the heavier components towards the center for ballast, and made the new design work beautifully. There were a few kinks to work out from the first model released in 2002 to more advanced and refined versions, but Buell accomplished the feat. In the process, they left a lot of satisfied customers, happy with their purchases and the performance and good looks of the later editions of the XB9R Firebolt.