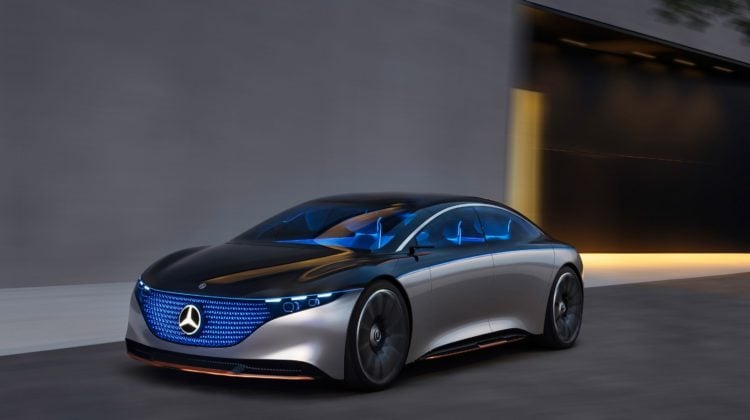 Mercedes Benz is known for producing some of the finest luxury cars on the planet, but then they decided to take it over the top. The new Vision EQS is a futurist vehicle that offers the ultimate in eye appeal and whimsy. At first glance, the machine is an immediate show stopper that draws one in to enjoy a glimpse of what the future holds for those who settle for nothing less than the best in everything. While this may be a lofty statement and more difficult to back up with tangible requirements, it’s one beautiful car. Here are 10 things that we’re pretty sure you didn’t already know about the new Mercedes Vision EQS.

According to Mercedes-Benz, the new Vision EQS is their interpretation of the future of luxury automobiles. Just one look tells you that it’s definitely set apart from the average or even the above-average luxury vehicle. The appearance of the Vision EQS is nothing short of captivating. The exterior is something we’ve never seen done in such grand styling with the new grille that immediately draws the eyes in with its illuminated front end. The design of the new Vision EQS is an innovative approach to combining the elements of pure art with a heightened functionality for the best of both worlds. It’s put together as one would expect from a brilliant sculpture, taking into consideration a progressive new luxury design that offers a seamless aesthetic that gives it the appearance of a finely cut gemstone with its 229 individual LED stars which artistically apply the logo of the brand.

Upon inspection, you’ll notice that there is a contrast that has been achieved by the joining of the black panel LED matrix grille along with the headlamps in a continuous 360-degree exterior light belt, completed with the rear light clusters. This is the brand new exterior structure form Mercedes has developed and it’s technically precise. The division of color in exquisite and dynamic, appealing to the eyes.

4. The Vision EQS is inspired by luxury yachts

The interior design has been thoughtfully modeled after some of the features found in luxury yachts. You’ll immediately notice the difference once you inspect the interior of the car. Mercedes-Benz has perfected its wrap-around effect with a serene environment with open spaces within the architecture to create the illusion of space in an organic and seamless continuation from the dashboard to the trim.

The design of the new Vision ESQ employs the use of large wheels and a long wheelbase. The design team used a few nifty tricks to make the vehicle look even longer than it is to give it a commanding presence. They gave it a 2 tone paint scheme which has an amazing visual effect for making it appear even longer and the ultra-short overhangs add to the effect. We think that this was a brilliant touch.

6. It truly is a look into the Mercedes-Benz future design and evolution We learned that the leadership at Mercedes-Benz has decided that it’s time to turn a corner when it comes to establishing uniqueness in the marketplace. While it has already done a great job of distinguishing the brand, there is more to be done. As we move into the new future of production cars, MB claims that elements of this new design will be what you see in future models of the brand’s production vehicles. It is somewhat of an evolution.

7. The exterior of the car glows in the dark

When you’re driving down the road at night, the Vision EQS is going to make its presence known in a way that no other automaker has yet thought of. The pinstriping that flows down the entire length of the car and it will be placed at about shoulder level for the driver. A very thin band of light will appear when the lighting system is used, further distinguishing the vehicle when it is on the road.

8. The headlights are extremely unique The digital headlights that will be a standard feature of the Mercedes-Benz Vision EQS. They are comprised of twin holographic lenses, which is yet another novelty. Although it looks amazing this isn’t the greatest benefit. The headlamps feature highly variable beam patterns. Yet another new feature of the upcoming car.

9. This car is made of eco-friendly materials

Another interesting fact that we learned about the new Vision EQS is that some of the components are made of materials that are recycled. For example, recycled PET bottles have been used to make the Dinamica microfiber. They took it a step further and manufacture the headliner of the car with material that is crafted of ocean-plastic waste that has been recycled.

10. The Mercedes-Benz Vision EQS is the new flagship model of the brand

The Vision EQS has been designated to become the leader of the pack so to speak for a new generation of Mercedes-Benz luxury vehicles. It is the inspiration from which a new line of fully electric cars will be designed. According to Daimler’s Chief Design Officer, Gorden Wagener, the new dimensions of sustainable luxury that are presented in the Vision EQS are intended to blaze the trail for the entire fleet of the EQ line which is to come in the very near future. It’s going to set the precedent and lay the foundation from which the new models will arise. We appreciate the fact that they included sustainability and the use of materials that are made from recycled waste. The world is changing and Mercedes-Benz appears to be leading the revolution.