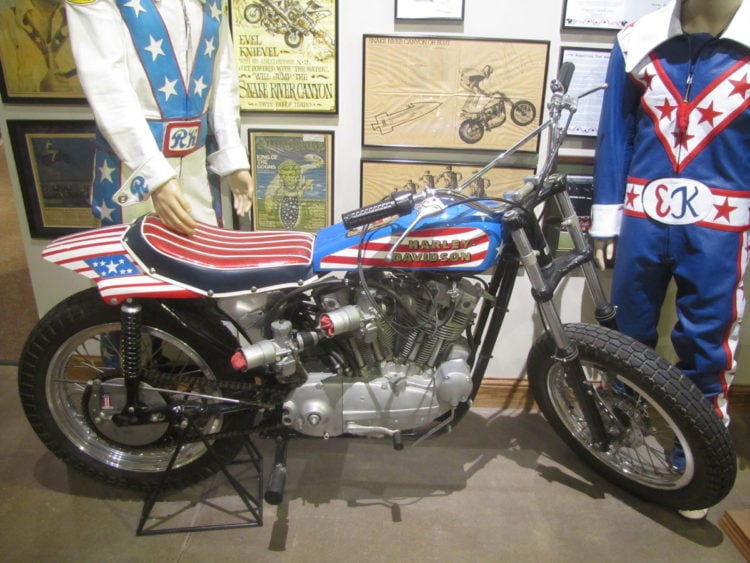 Evil Knievel will forever be known for his daring televised motorcycle stunts, many that him left him severely injured. The legendary daredevil would ride several motorcycles during his career that spanned during the 1960’s and 1070’s. His daring fetes and his flamboyant leather jump suits and signature red, white and blue motorcycles would make Evel Knievel a celebrity. He was often featured on ABC’s Wide World of Sports including 1971’s special “The Last Gladiator” and remains a legend. Here are Evel Kneivel’s most famous motorcycles.

Robert Craig Knievel was born in Butte, Montana on October 17, 1938. He quit high school and went to work at copper mines where he operated a diamond drill and earth mover. Knievel always loved motorbiking and participated in motorcross, local rodeo competitions and ski jumping events. Unfortunately, the daredevil was fired from his mining job when he tried to pop wheelies with an earth movie and knocked out a power line that left the city without power for hours. Knievel joined the army during the 1950’s and excelled as a pole vaulter on the Army track team.

After serving in the Army, Robert Knievel returned to Butte, Montana and married Linda Bork. He started a semi-pro hockey team and continued his thrilling hobbies. To support his young family, two sons and two daughters, Knievel started Sur-Kill Guide Service where he would hunt big game for people. His love of the environment and wildlife protection led him to hitchhike to Washington DC in 1961 to speak to Congress to raise awareness of Elk relocation. Robert Knievel would return to the motorcross circuit suffering injuries including a broken collarbone and shoulder. He briefly sold insurance before opening a Honda motorcycle dealership in Moss Lake, Washington. His interests in stunt riding would lead to over 75 ramp to ramp motorcycle jumps, fame as “Evel Knievel”, many marketing pursuits and, in 1999, induction into the Motorcycle Hall of Fame.

Robert Knievel and his wife Linda divorced after 38 years of marriage. He married Krystal Kennedy at Caesar’s Palace, Las Vegas in 1999. Upon retiring from motorcycle stunts, Knievel was known for promoting motorcycles, marketing his images in items including artwork and toys. Knievel also had a traveling museum in a recreational vehicle that he drove around the country in. He became known for his anti-drug campaign and endorsing motorcycle helmet safety. Robert “Evel” Knievel died on November 30, 2007 of pulmonary disease at his home in Clearwater, Florida.

The Triumph T100 that Evel Knievel rode back in the late 1960’s is the most famous bike the dare devil rode and lives on in infamy. Evel Knievel used the motorcycle in his first big televised event. The jump occurred on December 31, 1967. Knievel, in his quest to become famous for his challenging motorcycle stunts, attempted to use the Triumph T100 to jump 141 feet over the fountains outside of Caesar’s Palace in Las Vegas. The jump would become his most famous even though he crashed. John Derek produced the event and ABC bought the rights to the failed jump and Evel Knievel became a legend. Knievel suffered injuries including a crushed pelvis and femur and fractures to his hip, wrist and ankle. He was in a coma for days and unable to ride again for months.

One reason that may have contributed to the crashes throughout Evel Knievel’s career is that he preferred to ride motorcycles that were designed for street riding and flat bed racing, not for popping wheelies and making 100 foot jumps These motorcycles, when crashed, left the force going straight against the rider’s body. Evel Knievel’s Bonneville Triumph (Evel Knievel’s 1970 Triumph Is Not for the Faint of Heart | Man of Man) however would continue to be his most famous motorcycle. Despite being a street bike, the Triumph had a 500cc twin parallel engines that were air cooled with a single carburetor. The Triumph was famous for being painted with Knievel’s signature red white and blue stars and stripes. It would remain on display at Caesar’s Palace for decades and was eventually sold at Julien’s Auctions for $25,000. Knievel’s son Robbie, would go on to successfully make the same jump in 1989.

Over the course of his career, Evel Knievel performed many daring jumps, most televised. In 1971 he tried to get permission to jump in the Grand Canyon but was denied airspace permission. Instead, Knievel attempted to jump the Snake River Canyon and crashed. In 1975 he did a long jump at Wembley Stadium in London but crashed after clearing 13 buses.. Other jumps over busses occurred during the mid 1975’s at places including King’s Island in Cincinnati, Ohio and Seattle Washington’s Kingdome. In January 31,1977 Evel was injured in the rehearsal at a Chicago Amphitheater. Attempting to cash in on the excitement of the movie “Jaws”, Evel was to jump over a 90 foot salt water tank filled with lemon sharks. The exposed tank was 64 feet due to the platform length. Knievel crashed on landing over the tank during rehearsal and the event was canceled. He fractured his arm and collarbone. The event is defined as the end of Evel Knievel’s stunt career and would help create the famous phrase “jumping the shark” as the point when a popular television show loses its appeal. Knievel would go on to market his image, promote motorcycles and coach his son Robbie.

Other motorcycles that Evel Knievel rode

Evel Knievel rode several motorcycles throughout his stunt career. He rode a Honda 250cc to jump crates containing rattle snakes and 2 mountain lions.. In 1966 he favored a Norton Motorcycle Company’s 750cc. In 1969 and 1970 Knievel rode a Laverda American Eagle 750cc. He was sponsored by Harley Davidson through the 1970’s often riding a Harley Davidson XR-750 one of his favorites. This model was also a fan of Mark Brelsford, Jay Springsteen and Cal Raborn. After retiring, Evel Knievel promoted the California Motorcycle Company and its “Evel Knievel Motorcycle”, a V-Twin Street Motorcycle not used for wheelies and jumps.