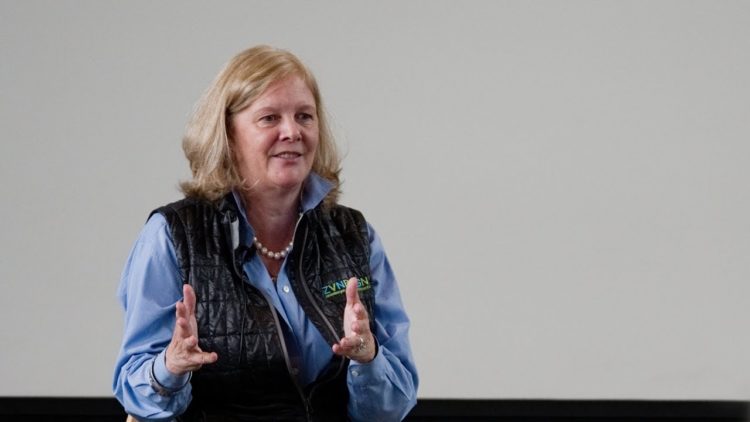 If you don’t know her name, join the club. But that doesn’t mean you shouldn’t. Once named by Forbes as “The Best Investor You’ve Never Heard Of,” Nancy Zevenbergen is the President & CIO of Zevenbergen Capital Investments LLC, an investment management company whose focus on wealth creation – rather than simply wealth maintenance- has resulted in a $3 billion dollar portfolio. In the past five years alone, Zevenbergen is said to have outperformed 99% of her peers – no little achievement, and one that certainly warrants further study. To help you do just that, here’s 10 things you didn’t know about Nancy Zevenbergen.

1. She graduated from the University of Washington

Zevenbergen was raised in a single parent family in Sumner, Washington. Although her mother didn’t go to college herself, she made sure all three of her daughters did. She also installed a strong work ethic in them from a young age, encouraging Zevenbergen and her sisters to take weekend jobs while they were in high school. Zevenbergen has since recalled how she spent her summers earning pocket money by picking and caning raspberries and strawberries in the surrounding farms. After leaving high school, she won a place at the University of Washington, graduating in 1981 with a BA in Business Administration with a concentration in Finance.

2. She founded Zevenbergen Capital in 1987

Throughout college, Zevenbergen worked as a part-time teller at Seattle’s Rainier Bancorp to fund her tuition. When she graduated in 1981, she was snapped up by the trust department of a local bank. While there, she got her first taste of managing money. She clearly impressed her bosses as, five years later, she was assigned the prestigious task of vetting the initial public offering of local firm, Microsoft. But by then, she was already plotting her escape. In 1987, she did just that when she founded Zevenbergen Capital (ZCI). For the first couple of years, the company flew under the radar. Zevenbergen ran it almost single handedly from home, managing her client’s assets from the kitchen table while she kept an eye on her kids.

3. She manages almost $3 billion in assets

What started as a small-time kitchen startup has grown into a success story to end all success stories. Over the last 30 years, Zevenbergen has developed Zevenbergen Capital from a sleepy, one-person business managing $500,000 in assets into a woman-led, globally respected firm that currently manages nearly $3 billion in assets. With her distinctive perspective and her ability to see the long-term potential in, as one commentator puts it, the “next great giants”, she’s emerged as one of the leading investors of her generation.

4. She wants to create wealth

Most investors are in the business of maintaining wealth. But that isn’t enough for Zevenbergen. In her bio on zci.com, she speaks about how her desire to actively create wealth for people led her to start Zevenbergen Capital. “I started my own company because I wanted an opportunity to create wealth for people,” she explains. “We believe wealth creation happens through concentrated positions. Bill Gates, how did he make his wealth? With a diversified portfolio? No. Wealth is created through concentrated positions. You have to know how to take advantage of volatility.”

5. She knows how to pick winners

When it comes to her employees at Zevenbergen Capital Investments LLC, Zevenbergen believes in giving them the freedom they need to achieve their goals. “I want to give people opportunities and jobs and let them run. ‘Here’s a business challenge, you want to run with it? Go.’” she’s said of her attitude to management. Fortunately, she has a talent for picking the kind of staff who will live up to the challenge. But her ability to pick out the winners from the losers doesn’t end with her hiring policy. Zevenbergen’s talent for spotting worthy investment opportunities is legendary, with Puget Sound Business Journal saying. “[she] knows how to pick winners.” They aren’t the only publication to applaud her efforts – the New York Times has praised her “old fashioned discipline” while Forbes calls her the “best investor you’ve never heard of”.

When she’s not in the office, Zevenbergen can usually be found watching a local soccer match. A huge sports fan for year, she was a walk-on on the women’s basketball team during her college days at the University of Washington and has since developed a passion for soccer after her two-daughter started playing at the Division-I level of their respective colleges.

7. She believes in giving back

With wealth comes responsibility, a truism Zevenbergen is only too keenly aware of. In addition to serving as an advisory board member at the Michael G. Foster School of Business at the University of Washington and the Seattle Pacific at the University of Seattle, Zevenbergen is also heavily involved in philanthropy via the Anduin Foundation, a charitable foundation she and her husband John established in 1993. In 2018 alone, the foundation awarded $836,000 in grants toward education and cancer research.

Zevenbergen may be one of the most respected investors of her generation these days, but the ride to the top wasn’t always smooth. Along the way, she’s encountered numerous challenges… and learnt some valuable life lessons in the process. Speaking to medium.com about the lessons she’s learnt and the advice she’d pass onto the next generation of entrepreneurs, she says “When things are tough, if you believe in what you’re doing you just have to power through and keep going. Often you learn the most in a tough situation that hones your skills to be even better. “Also, keep an open mind to possibilities,” she adds. “When the investment world is against a company and headline news are negative — take a look, it might mean opportunity. Watch the youth and how they travel, find entertainment, communicate, and shop. They are the future drivers to businesses.”

At this point in her career, Zevenbergen isn’t short of honors. In August 2018, she added another title to her collection when The Legends Campaign, a Seattle Reign FC and Avanade partnership which recognizes women for their contributions in the Pacific Northwest, named her a ‘Seattle Reign FC Legend’.

At the start of October 2020, Wall Street Journal picked through the numbers to decide on a winner for their No. 1 Stock-Fund Manager of the Year award. And the winner of the stock-picking crown? You guessed it… Zevenbergen and her team on the Zevenbergen Genea Fund.