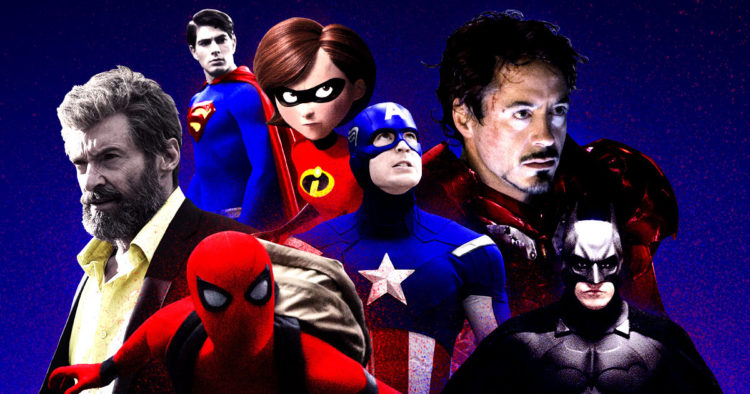 Some superheroes are known for their bravery, others for their struggles with inner demons while still others are just incredibly powerful. However, there are some heroes who might not have made it as far as they did if it weren’t for one vital commodity, money. When it comes to super-rich superheroes we all know Batman has billions and Ironman is his equal at least, but who’s number one? You’ll have to read on and see. We’ve ranked the top ten wealthiest movie superheroes in order of their net worth. Sadly, while some of them are still eligible bachelors, they’re all fictional.

The much-maligned and made fun of (Until Jason Momoa took over and fixed that problem) Aquaman is arguably the wealthiest superhero of all time. Why isn’t he in the #1 spot? That’s easy; we can’t actually estimate his net worth at all. In addition to having a kingdom that takes up seventy percent of the Earth and all the resources therein, he also has priceless Atlantis. Technically as the sovereign ruler of the seas, he owns every shipwreck, shipping lane, and mineral, plus all ocean water, oil, and fishing rights. Unfortunately, he can’t or won’t enforce it, so he gets an honorable mention. *If you don’t count Aquaman, Janet VanDyne aka The Wasp weighs in with around a billion dollars, so she’d be lowest on this list and the only female.

The infamous Professor X, founder of the X-Men and the Charles Xavier Academy For Gifted Youths didn’t get Cerebro and the X-Jet with his good looks and charm. He also didn’t get them with his ability to mind control others, which is part of why he’s on the heroes list instead of the other side. The differently-abled superhero with a better-than-Stephen-Hawking-brain got his money the old fashioned way, by inheriting it.

Angel, the male character, not the dragonfly winged fire spitter, was probably the least recognized sickeningly rich hero. He also tended to waffle back and forth between good and evil, depending on circumstances. However, since he spent an enormous amount of money in the comics funding superhero teams. We’ll round it up and count it as ‘good’ despite his less than stellar appearance in the X-Men movies franchise.

It doesn’t matter whether you loved the 2005 Fantastic Four or the 2015 Fantastic Four better. We liked them both in their own time. At the end of the day, Mr. Fantastic is one of the most monied supers who ever lived, but he didn’t make the top five. He didn’t make a lot of things, like enough time for his wife and a life. So perhaps it’s fitting that he lands somewhere mediocre despite his extraordinary brains.

While we fully accept that Ozymandias went utterly evil in the end, he was a hero, and wealthy when the Watchmen started. It’s a tough call leaving him on this list, but he technically qualifies. That said, Ozymandias is a fallen hero or less in the eyes of the fans. We won’t give him more credit than this: He made the list.

No one said they’d all be Marvel/DC crossover characters. Richie Rich has saved the day plenty of times, and he doesn’t even have a superpower. He’s all money, snark and loyal friends, which makes him more remarkable than anyone else on this list. As heroes in movies go, perhaps the funny, non-broody kid hero isn’t ever going to be the most popular. It’s okay, though. He can still buy anything he wants to make himself feel better about it.

Did we mention that not all our heroes are human? Scrooge McDuck is always saving the town and even the world with nothing but his walking stick, his nephews, his servants, and his money. We’re not sure if he has a useful superpower, but he seems to have two that we can identify. First, he has an uncanny connection with his money and always knows when it’s at risk. Secondly, he can swim through gold. Treasure of the Lost Lamp is a bit more Indiana Jones than Avengers, but it’s a feature-length film nonetheless.

While he’s probably the first to mind when talking about wealthy superheroes, Batman barely made the top five if we include Aquaman. Sure, he’s literally battled everything from gods and a dinosaur to alcoholism and won. Yet, he’s always had his comfy billions to lay back on when he needed downtime. Batman’s saving grace is that money is just a means. His detective skills and ability to inspire loyalty in everyone from Alfred to the Joker are what give this broken broody bat his real power. Though exact estimates on his wealth vary wildly, it’s top-tier.

Like Bruce Wayne, Tony Stark is a rich playboy with too much spare time and nowhere near enough oversight. Unlike Bruce, he did eventually settle down with a nice woman who is probably smarter and undoubtedly more savvy and happy than he ever was. (Don’t remind us about Bruce’s brief and ill-fated wife who was actually a plant and therefore not legally eligible to sign a marital agreement. She doesn’t count.) Ironman fans will defend the suit to the end, but his real superpower is his massive brain and an oversized ego. Also like Bruce, estimates vary, but suffice it to say, they’d hang out with the same gold diggers if they were neighbors.

We know this will surprise some folks, because not every comic fan loves every comic. The Black Panther is valued around ninety point seven trillion dollars. That’s probably an underestimate given his countries’ tech and their supply of the rarest mineral on earth (Vibranium). If Wakanda wanted to rule the world, it would be T’Challa’s planet. It’s just that simple. Fortunately for everyone else, he’s not only benign, but he’s also a hero with more sense and caution than any leader on real-earth.

If knowledge is power, then you have enough to write your own comic series based on some rich-kid-turned-hero now. The relative wealth of supers is a lot of fun to read about since real-world technologies don’t limit them. If we had a few billion in or cellar, you can bet we’d be out there in the original Batmobile, trying to break up some criminal ne’er do wells too. We’re not the only ones. Real-life costume sporting heroes have saved the day more than once.  It’s nice to know there are a few vigilantes in tights here in the real world too, but that’s a whole different article for another day. What would you do with more money than you could spend in a lifetime?