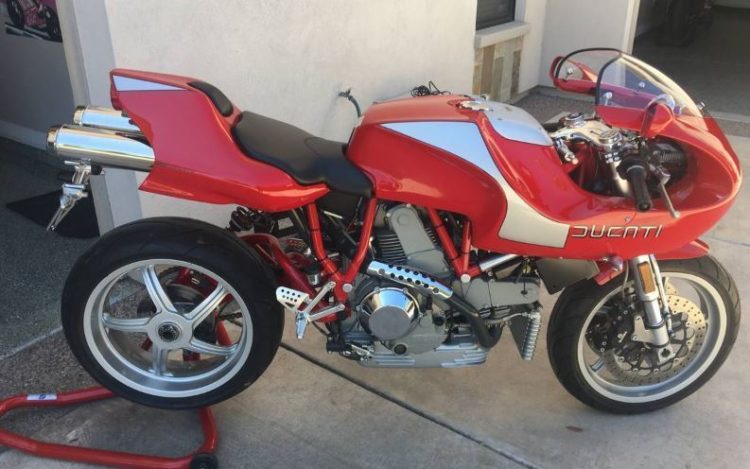 Antonio Ducati and sons founded what is now known as Ducati Motor Holding S. p. A., a company in 1926 that specialized in the manufacture of radio equipment, and eventually electronic equipment for the armed forces. It was located in Bologna, Italy, and was unfortunately the victim of frequent bomb attacks during the Second World War. The company seemed to survive the onslaughts, and eventually began dabbling in the manufacture of sport motorcycles, releasing their very first model in 1950. Since then, the company has gone through several changes, including change of ownership. Regardless of the ups and downs, Ducati has continued to successfully manufacture motorcycles, particularly sport bikes, successfully over the years, and even with a reputation for having higher prices, many longed for the opportunity to own their own. This popularity kept the company moving, with a strong stride toward the future.

With many successful motorcycles already manufactured, Ducati put out the first MH900e in 2001, and the bike was continued through the following year. A limited edition, only 2000 of them were offered to the public. It was originally designed in recognition of a 1978 racing bike by Mike Hailwood, who raced in and won the 1978 Isle of Mann TT. It is explained that the design for it was credited to Pierre Terblanche, with the letters MH standing for Hailwood’s name, and the small letter ‘e’ at the end being representative of the word ‘evoluzione’, which means evolution in English.
Amazingly enough, these motorcycles were each built entirely by hand, and Ducati sold each one directly to the public over the Internet only

More Than a Racing Bike…

Typically, Ducati would immerse in researching completion and market statistics prior to the design or production of any bike, but the MH900e was a different story altogether. Terblanche brought this design to be by the seat of his pants, since Ducati had recently undergone takeover by high-production-focused venture capitalists. This motorcycle wasn’t built with the making of big bucks in mind; it was built from the heart.

This is obvious in many small and seemingly insignificant aspects of the bike’s design. For example, the dashboard offers retro-looking gauges coupled with others that are digital, which makes for exquisite eye candy which gives credit to the time the bike hails as well as the time of its production. There is also a re-introduction of chrome that had been forsook in recent years, and the use of the colors silver and red, as well as the old ‘70s Ducati log (along with the current one), continue to give main credit for the bike to Ducati while simultaneously being reflective of the colors red and green (for Castrol) that adorned Hailwood’s original bike. Those points are just the beginning when it comes to the aesthetic.

Mechanically speaking, the MH900e was just as good on the road as on the track, and people used it for a street bike more often than it was raced. However, it was definitely equipped primarily as a racer, as you will see from the specs that follow. Owners of the MH900e also speak of the bike’s handling, which back up the fact that this track bike is just as much fun to maneuver around on the roads.

One example given is that the handling seems choppy if the roads are bumpy; the choppiness is also attributed to an obvious lack of weight over the front end. Other than these things, the MH900e is said to provide a very stable ride that is pretty much commonplace overall. It helps that the low handlebars stretch the rider’s body out over the bike, as is normally seen in race motorcycles that are similar; this aids in providing better handling and stability as well.

With all things, from appearance to road ability and handling considered, here are the specifications for this bike:

Basically, the 2000 Ducati MH900e was a sport superbike that designer Pierre Terblanche designed as a tribute to motorcycle racer Mike Hailwood. It shows clearly in the design, which is a visual mix of retro and modern aesthetics that really worked well. While paying tribute to the racer himself, Terblanche also stayed completely true to the Ducati name, which made this one beautiful limited edition indeed.

As for the motorcycle’s motor and other mechanics, they are all very common to bikes of Italian design. It was easy enough to handle, though there seemed to be a few minute issues with jerkiness upon takeoff and over bumpy roads. Putting that aside, however, owners and riders claim that the MH900e provided them with more than enough stability to take it out on the road with confidence. As a racing bike it did the trick, though the sales focus at the time was likely on its road-riding ability, since it was primarily sold online. With a total of only 2000 of these motorcycles made, however, some of them were most likely raced more than anything else.

To those of you with a yen for this particular motorcycle, it would likely be just right for any riding that is done on it. It would be a wonderful addition to any collection due to its tribute status, and it would be very cool for just tooling around on for anyone. Since nearly 20 years have passed since production, we are pretty much looking at a classic bike, which should be kept in mind if one of these is ever happened upon and purchased, so treat it accordingly.
Well, that’s it in a nutshell for the 2000 MH900e by Ducati, a fun and gorgeous piece of machinery by an iconic Italian motorcycle company. If you get a chance to ride one, take it, because this model isn’t easy to come by for obvious reasons. Treat it right, and it will likely do the same for you.
Most of all, have fun riding, and be safe.