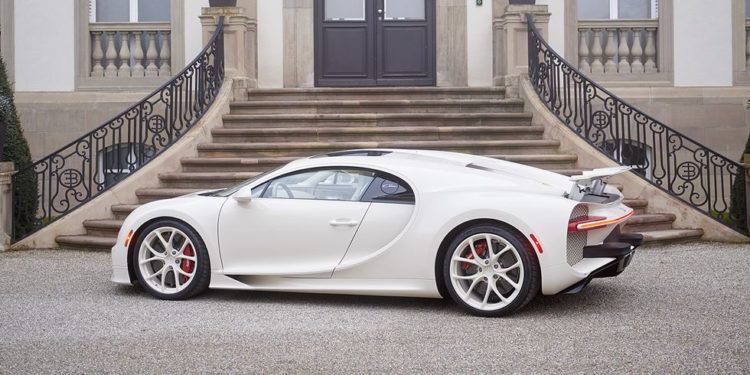 Property mogul and renowned car collector Manny Khoshbin has finally taken delivery of his one of a kind Hermès Edition Bugatti Chiron after three years of patience. What took so long to build? We don’t like to be cliche, but it’s accurate and apt to say you can’t rush perfection. If there’s a more beautiful Bugatti in the world right now, we’d be hard-pressed to find it. The creation is a collective effort from Bugatti, Hermès, and Khoshbin himself. Several color schemes and doubtless many fine details were attempted and discarded before the final edition of this singular car was ready to roll. One look is enough to tell anyone with eyes that this is the height of automotive artistry, and it was well worth the wait.

Anyone who knows fashion or high-end accessories is familiar with Hermès. From gorgeous handbags to silk scarves, Hermès walks the runway every year and adorns the necks and even tables of the whos-who worldwide. You can find Hermès shoes on the feet of the elite in Dubai and their jewelry on the ladies of Paris. If you’re lucky enough, or money-savvy enough, you’ll recognize their horse pattern often as you go about your cultured dealings.

We could rant about their stunning and handsome design work for days, but there’s something else Hermès does that impresses us even more. They’re committed to sustainability in a way not enough luxury companies care about at all. From supporting the UN Global Compact voluntarily to hiring local, and making decadent objects out of replenishable resources like bamboo, Hermès is the very definition of class and compassion, modern sensibilities and timeless taste.

It’s no surprise that Hermès and Bugatti put their creative and well turned out heads together. After all, there are so few who are genuinely at the top of their industries. Collaboration between the two seems only natural at some point. High fashion and luxury cars have always been closely related. From fabric to paint and fine details, the industries have so much in common after all. We’d love to be a fly on the wall at the meetings that must have taken place to create such a vehicular work of art. Of course, we doubt there were any flies within a mile of those elegant meetings. 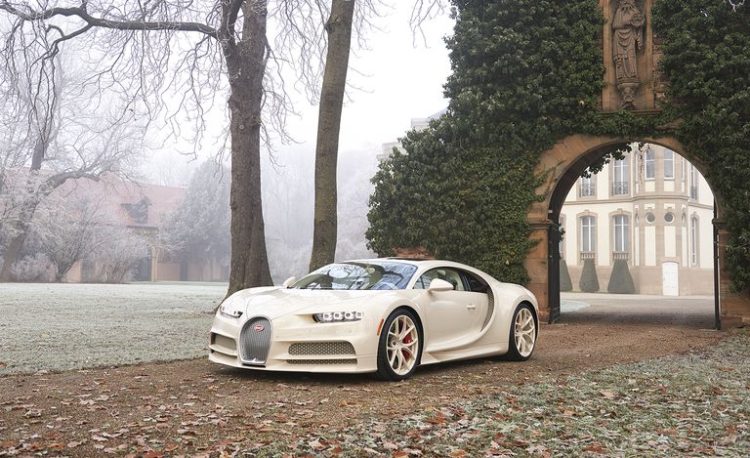 “The Chiron is the fastest, most powerful, and exclusive production super sports car in Bugatti’s history.” – From the Bugatti Website

To say that Bugatti builds fast luxury cars is a bit like saying NASA knows a smidge about math. The level of understatement inherent in that description is ridiculous. When it comes to choosing a car for millionaires or billionaires who know how to handle high speeds but prefer to do so with the utmost comfort and grace, one name stands out above all others, and it’s Bugatti.

The Chiron’s, in general, are among the most stunning, futuristic, yet classically inspired vehicles on the roads of the world. The curvature and lines are unmistakably Bugatti, though they manage to stand out from the pack even among the most elite and exceptional cars. Unquestionably, choosing a Chiron to create this fusion of art and fashion with the heart of a racecar was the only sensible choice. In fact, Mr. Khoshbin was offered the Chiron Supersport 300 + and passed in favor of his custom Chiron Hermès according to Car and Driver.

What Bugatti deems “Skyview” we would call a stroke of artistic genius that brings a driver into a whole other realm of experience. Anyone can choose a sports car with a convertible top, but to have the same view without the wind in your ears is like floating through space in a glass rocket, rather than flying through the air. Without question, a Chiron with the Skyview option is one of the finest and most visually arresting experiences a motorist can have. We can only imagine what it would feel like to take one of these incredible machines up a winding mountain road on a cloudy day. To pass through the field of white and emerge again above the world in a flood of sunlight is breathtaking even for a driver with a solid roof above them. 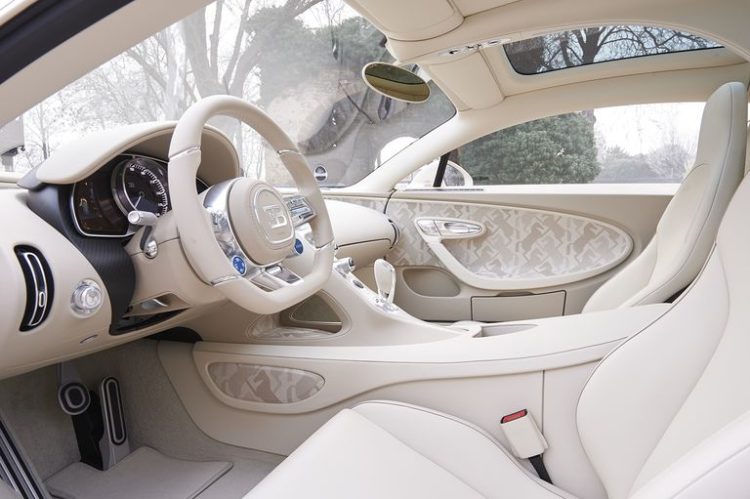 Manny Khoshbin didn’t just choose one Hermès car. He already had another. Several years ago he convinced Pagani to collaborate with Hermès on a Pagani Huayura Hermès one of a kind car as well. Clearly, he’s a man who knows what he likes and isn’t afraid to pay top dollar and work with the best in the world to get it. As we mentioned, he waited so long to get his Bugatti Hermès car because they had to find exactly the right combination to suit his needs. They tried a blue color scheme, but ultimately he opted for Hermès Craie (a lovely chalk white shade) for the whole car, including custom painted rear bumpers, which is something no other Bugatti Chiron has.

The exquisite details include white on white Hermès horses patterned fabric on the interior and Hermès patterns on the grilles. In addition to all the other Hermès details on this singular beauty, there’s a logo on the inside that says, “Dressed by Hermès.” There’s truly nothing like it in the world, and a glance at the subtle beauty of the Bugatti Hermès Chiron is all it takes to remind anyone that they’re viewing something extraordinary. If you dream of Bugattis, this show-stopping, heart-stopping car is about to take over your nights. We can’t imagine a more unique and gorgeous vehicle. Unfortunately, you can’t have one at any price.

When it comes to custom cars, most people settle for some rims and maybe a sweet wrap. Then there are those who go ‘all out’ with tinted windows, custom gear shifts, sound systems, and so on. Beyond that, there are the collectors, like Manny Khoshbin, who have not only the love of automotive beauty but the budget to have a company like Bugatti collaborate with Hermès to create something so rare and fine that it is alone in all the world, a true custom vehicle. With the heart of a titan and the body of a deity among vehicles, the Bugatti Hermès Chiron isn’t just in a class of its own. It’s from a whole different world.