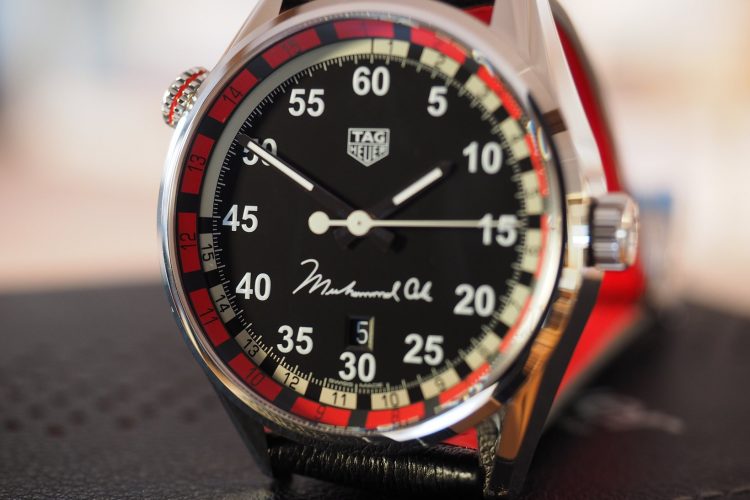 Tag Heuer is a brand of luxury watches that is well known in motor racing circles. What the majority of the population doesn’t know is that the watch maker has recently launched a new watch that honors the memory of the legendary boxer Muhammad Ali. Not long after the late great’s passing, TAG Heuer presented this lovely tribute to the world and it is an edition that is well worth a closer look. We offer for your consideration, a review of the TAG Heuer Special Edition Tribute To Muhammad Ali.

This commemorative time piece was released a few months after Muhammad Ali passed away. it is a forty tree millimeter that features a skillful blend of a modern platform with vintage traits. The design of this watch is inspired by the Ring Master stopwatch which was officially launched in 1957. In a flashback to the past, the current model features a tracking of fifteen three minute roudns which is a departure from the current boxing matches that are finished in twelve rounds. The company has decided to stick with the vintage number for a deeper tie with with history of the sport. The inner ring of the watch is white in color and features the two minute round timers for amateur and female fights. It also includes a display for the recovery periods that fall in between the rounds in a black tone. These rings are all rotating and make an impressive display that any boxing enthusiast would be thrilled to see.

The Special Edition Tribute to Muhammad Ali is a tool watch that has been specially designed for timing boxing matches. Unlike the original from which this automatic wristwatch has taken its inspiration, this one does have a few differences. The new edition is not a chronograph like it’s 1985 predecessor.

This edition has been created with a dial that has high legibility even at odd angles. The date window is discreet and doesn’t take up a lot of space on the dial. It’s’ special release took place in early November with a limited edition of just seven hundred and fifty in production. While this is the total number that is slated for production in the initial run, there is the high likelihood that there will be subsequent manufacturing runs on this edition made at a later date.

The white numerals are a nice contrast with the matte lack dial. This also contributes to the high degree of legibility. Another special feature of the dial is the long signature of Muhammad Ali. Although this feature has come under scrutiny and some criticism because of its length, the designers felt it appropriate for inclusion because of the fact that this time piece is dedicated to the greatness of the boxer himself. 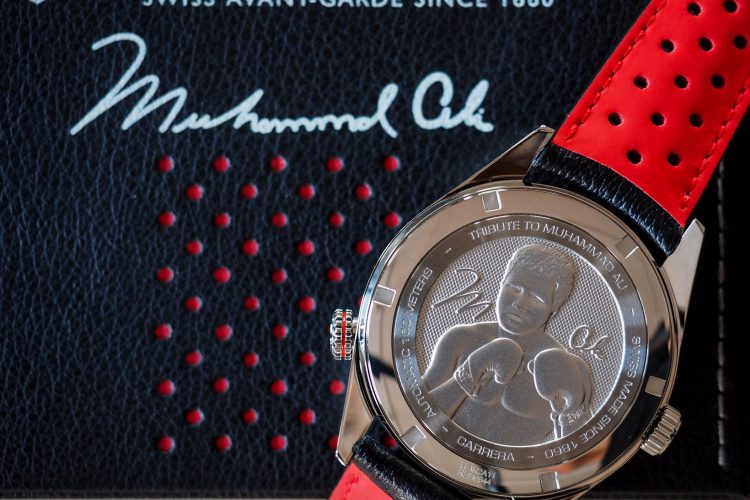 The Carrera case measures forty three millimeters in diameter which is reported to have a good feel when worn, although some are put off by the size. Men who participate in the sport of boxing are likely to appreciate the larger dial as most of them have generous sized arms.

The caseback comes with a special edition commemorative engraving that distinguishes its purpose and inspiration. This is a restyling of the Carrera Drive Timer that was released at 2014 Baselworld. The solid caseback is a departure from the Carrera Drive Timer in that it lacks the sapphire crystal, which gives it more of a personality of its own by intention of the design team. The inner bezel rotates via the crow at 10 o’ clock. Although this watch has been based on a few different inspirations, it is in itself, a unique design that merely borrows inspiration from the others. It is truly a one of a kind creation.

The strap is also a reflection of the colors that were preferred by the champion boxer. It comes with a black and red strap. The original material used for this component is black calfskin with the appropriate addition of the red coloring.

The Special Edition watch comes with attractive packaging that further reinforces its limited edition status. It is only sold at authorized dealers for Tag Heuer. The box design also features the characteristic red and black colors in rally style, similar to that of the strap. All required paperwork is included as well. The price for the TAG Heuer Muhammad Ali Special Edition watch is set at three thousand dollars. While the first run of production is limited to seven hundred and fifty total pieces, speculation holds that the company may issue additional runs in the future. As of yet there is no word about when or how many. We’re assuming that further production will depend upon the watch’s popularity and customer demand.

The TAG Heuer Muhammad Ali Special Edition is a unique watch that we believe will become a collector’s piece in the near future. Its price tag is a bit steep but one must keep in mind that it is produced by one of the finest modern watchmakers in modernity. TAG Heuer has built a solid reputation for delivering the highest of quality and innovations in their products. They are a purveyor of find luxury watches that are designed with great care using the finest of quality in materials and craftsmanship.

These factors combined with the historical roots and inspirations from which this watch was designed also lends some significance that will make it a popular choice for fans of the sport of boxing. It will have a particular appeal for those who remember how the sport was configured during the late 1950s era because it is inspired by this period of time. Also, those who know the humanitarianism of the late great Muhammad Ali and his ill publicized charitable donations may be fond of a time piece that is dedicated to the memory of this great American.