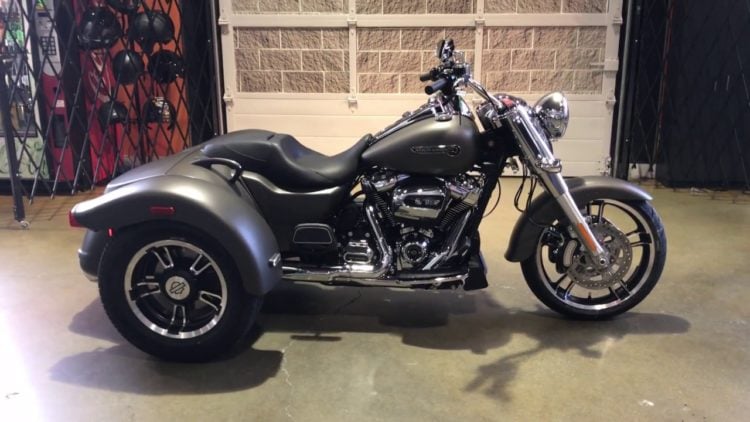 Three wheeled motorcycles, also known as trikes have been popular for several decades. Although they haven’t commonly been seen on the roadways in the past few years, manufacturers reported a surge in sales, which means that more people are buying them. They offer certain advantages over two wheel and quad cycles in that they are more stable and safer than two-wheelers and they have a better turning radius than the quads. If you’re considering giving a three-wheeler a try, here are the top five three-wheel motorcycles that money can buy. Bombardier Recreation Products has released the Can-Am Spyder F3-T for trike enthusiasts who are looking for a powerful ride with room to pack a lunch. This beauty comes with a generous 68” wheelbase and is powered by a 1330 ACE in line 3 cylnder and a 6 speed semi-automatic transmission with reverse. It is also equipped with stability control, anti-lock brakes and traction control. The F3-T comes with extra cargo capacity and wind protection. You have your choice of colors including Oxford Blue Metallic; Pearl White; Monolith Black Satin or Intense Red Pearl. Other features include a full color LCD display that is vehicle optimized with smartphone apps integration and a house audio 4 speaker sound system. The rear air suspension is manually adjustable. There is plenty of cargo room with a cargo capacity of 21 gallons. The Piaggio MP3 is for trike fans that are looking for a compact scooter that comes with a decent array of useful features and creature comforts. The new Piaggio MP3 500 is an updated version over its predecessors that is packed with safety features including ABS brakes, ASR traction control, a redesigned frame and enhancements in its ergonomics. The seat has been upgraded to make it the most comfortable ride ever. Piaggio also put larger front wheels on the new Piaggio to increase the comfort of the ride, along with an articulated quadrilateral front suspension. The front wheels are independent and front tilting giving you a good grip on the reality of maneuverability. The instrumentation is a totally new design with a multimedia platform and multi-map electronic acceleration. The styling has also been updated with a more modern look. The new Harley-Davidson Freewheeler is a trike that comes in a Vivid black color. It features a hot rod theme in a stripped-down version with a new frame that is easy to handle when you’re rolling down the road on three wheels. You can opt for cruise control and standard California Emissions for additional few hundred dollars added to the total cost. The Engine is a 1 Milwaukee-Eight with an electronic sequential port fuel injection and slash down style shorty chrome finish mufflers. The engine torque is 110.6 feet pounds with a fuel economy of 43 mpg highway. The Freewheeler was firsts introduced by HD in the Fall of 2014 as the 2015 model hit production lines. It’s grown in popularity with continual upgrades. What makes thee 2018 so special is the mini ape hanger handlebars combined with bobtail fenders that give it a sweet low profile. The 107 cubic inch Milwaukee 8 engine is a recent edition that was added to the line in 2017. The new Ural Baikal limited edition is a rare collectors piece from Ural Russian manufacture. It comes standard equipped with an on demand 2-wheel drive, a mounted spare wheel and a sidecar. This special edition is packed and ready to go on an adventure with a complementary in-house manufacture flask to carry your vodka, a high carbon steel hatchet and storm proof matches for lighting a camp fire. The LE features ceramic undercoating and the interior of all three fenders and on the sidecar tub for full protection. There’s also a windshield for the sidecar to protect your passenger from cold gusts of wind or pesky bugs. A Braven speaker is installed for your listening pleasure as you cruise down the road. This trike was inspired by travelers who are fond of excursions across the frozen tundra and this accounts for the cache of extras that make survival a possibility when you’re out in the Siberian winter. The Ural Baikal LE was manufactured at the Ural factory, located 500 miles southeast of Irbit, Russia in one of the most challenging geographical regions in the world. The factory is surrounded by more than 400 miles of barren ice fields created by the freshwater lakes that freeze over from the icy temperatures. The new Polaris Slingshot S is the base model in the lineup that comes in 3 other versions including the SL, SLR, and LE. It comes standard with power steering, electronic stability, ABS disc brakes and traction control. Interior weather proofing makes it durable. Two bucket seats are bolted to the chassis and four projector headlights illuminate your path after dark. There is plenty of cargo space in the lockable bins along with a locking glovebox. The three wheels are crafted of lightweight aluminum. This futuristic looking vehicle is powered by a GM EcoTeck 2.4L DOHC 4 cylinder engine that generates 173 bhp with 166 pound feet of torque, fitted to a 5 speed gearbox. It comes in the single color option of Gloss Black.