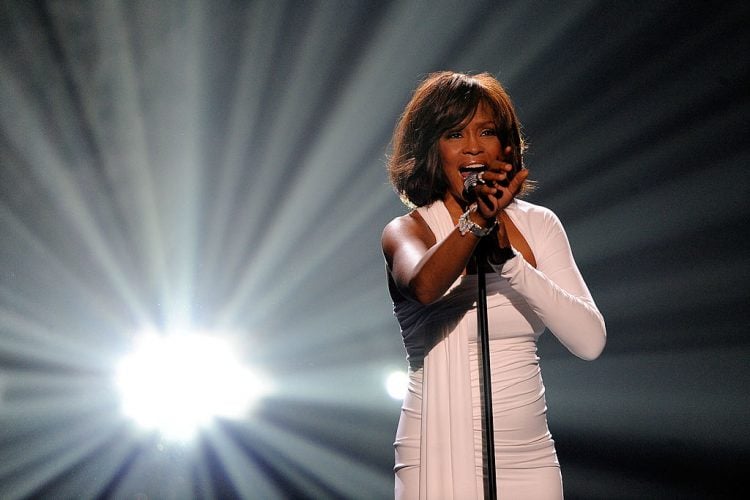 Whitney Houston was a popular singer, actress and model. She died tragically of causes due to a heart condition and drug use. Ironically, Whitney died the night before the 2012 Grammy Awards. Sadly, her daughter would meet a similar fate a few years later. Whitney rose to fame with one of the most beautiful voices in history. Her “girl next door” charm and natural beauty attracted the attention of the world early in her singing and modeling career. Raised in a musical environment, her mom is a famous gospel singer, Whitney had an early introduction to her musical career and the opportunity to be seen by recording executives.

In 2009, Guinness World Records named Whitney as the most awarded female singing act in the world. She is one of the top selling popular music artist selling between 170 and 200 million records worldwide. She recorded 7 albums and 2 sound tracks all earning diamond, platinum, multi-platinum or gold certification. Her crossover appeal and her strong presence on MTV kept Whitney in the spot light her entire life. She went on to act in a few movies with success.

Whitney Houston had a successful career despite the ups and downs in her love which included a tumultuous marriage, drug use and a tragic death that shocked the world.

Whitney Elizabeth Houston was born in Newark, New Jersey in a middle income family on August 9, 1963. She lived there until she turned 4 years old. The family moved to East Orange, New Jersey following the summer of 1967 Newark riots. The 6 days of rioting left 26 people dead and many injured. The unrest was caused by African Americans feeling disenfranchised and politically unrepresented. Many felt they had few rights and suffered police brutality. Ironically, given modern unrest in the African American community today, the riots were sparked by the arrest and beating of an African American cab driver.

Whitney Houston was destined to become a star. Her family is filled with talent. Her dad, John Russell Houston, was an army serviceman and later an entertainment executive. John gave Whitney the nickname “Nippy” when she was a baby. Her management company was named “Nippy, Inc.”. John died in 2003. Her mom, Emily “Cissy” Houston is a gospel singer who has recorded with many music greats. Whitney’s older brother Michael is a singer, and her older half brother, Gary Garland, played basketball for the Denver Nuggets. Whitney is a first cousin of singers Dionne and Dee Dee Warwick. Her Godmother is singer Darlene Love and her “honorary” aunt is Aretha Franklin. Whitney met Franklin in the recording studio with her mom when Whitney was just 8 years old and the two remained very close throughout Whitney’s life.

Whitney would later state that she knew God had given her the gift of music at an early age. With the influence of her mom and her aunts, there is no denying Whitney would become famous with her beautiful voice. Whitney sang as a soloist in the Junior Gospel Choir at New Hope Baptist Church in East Orange. Her first solo was “Guide Me, O Thou Great Jehovah”. Whitney also learned to play piano. By the age of 15, Whitney was regularly performing with her mother on stage.

During her early teenage years, Whitney often toured with her mom and sometimes performed with her on stage. Whitney was also a regular fixture in the recording studios with her mom. In 1977, Whitney performed as a backup singer on a recording by Michael Zager Bandis’ “Life’s A Party”. The following year, at 15, she recorded background vocals on Chaka Khan’s “I’m Ever Woman” which Whitney would later reprise. She also performed background vocals for Lou Rawls and Jermaine Jackson. She worked with Michael Beinhorn, Bill Lowell and Martin Disi as well. Although she was offered recording contracts in the early 1980s, Cissy insisted her daughter finish high school before starting a professional singing career.

Whitney signed a recording contract with Clive Davis and Arista in 1984. Her beautiful voice and looks quickly made her a successful singer and eventually a superstar. Whitney was able to be a successful crossover star. She sang solos and duets. She sang Rhythm and Blues, Adult Contemporary and Pop music, all successfully.

In the early 1980s, Whitney was discovered by a professional photographer while she was performing with her mom at Carnegie Hall. Whitney was chosen to appear on the cover of Seventeen magazine. She was one of the first young African American women to appear on the cover. Her “girl next door” looks and charm and was sought after to appear in print. Whitney posed for Glamour, Cosmopolitan and Young Miss. She was also featured in an advertisement for Canada Dry ginger ale.

8. A soap opera and the Cosby Show

In 1984, Whitney sang on the soap opera As the World Turns. She sang her hit “Nobody Loves Me Like You Do” and “If You Say My Eyes Are Beautiful” with Jermaine Jackson on the popular soap opera. Whitney was also asked to take the role of Sondra Huxtable on the Cosby Show. She turned the role down, however, because she was more interested in pursuing her singing career than a career as an actress. Ironically, Whitney would later act in film.

10. She turned down Michael Jackson

Michael Jackson did not ask Whitney to date him. He did, however, ask her to sing with him on “Can’t Stop Loving You”. For whatever reason, Whitney turned Michael down.  Perhaps she knew something that many of us didn’t at the time.   This is pure speculation but we’re sure that the former singing sensation had her ideas as to why Michael Jackson wasn’t worthy enough of a duet.

Whitney had many top Billboard hits throughout her career. She remains the only artist to have 7 consecutive number 1 hits on Billboard’s top 100 chart. Whitney is the only recording artist to win one or more Grammy, MTV Music, People’s Choice, Billboard and Emmy awards.  Should Houston have survived and gotten her life back together we’re sure she could have squeezed in a few more awards.

The film The Bodyguard grossed $400 million. Kevin Costner wanted Whitney to play the role of Rachel Marron, a pop star whom his character, Frank Farmer, a former secret service agent, was hired to protect after Marron is threatened by a crazed fan. Despite his frustrations with his new employer because protecting her is nothing like protecting the President of the United States, Farmer falls in love with Marron. The movie was successful and proved that Whitney not only could sing but could act as well. The soundtrack also garnered awards. Whitney and Kevin remained friends and he gave a eulogy at her funeral.

Whitney starred in several other films and recorded soundtracks for film. Films include How Stella Got Her Groove Back, Waiting to Exhale and The Preacher’s Wife.

The song featured in The Bodyguard would become the best selling single by a female artist. The popular song was featured in the movie and remains an iconic song that Whitney sang beautifully. I Will Always Love You remains the biggest selling non-charity single with over 9 million sold worldwide.

Whitney and Bobby married in 1992. Bobby is a pop music star in his own right having performed with the boy band New Edition and as a solo artist. However, he never achieved the fame that his wife did and it hurt the marriage. With the success of The Bodyguard and the song I Will Always Love You, Bobby had a difficult time living in his wife’s spotlight. Drug use and domestic violence marred the marriage. Bobby was arrested in 2003 on domestic abuse charges. The couple divorced in 2007.

Bobby and Whitney’s daughter was born in 1993. She was the love of their life and was embarking on a singing career of her own. Her mother’s death destroyed her. Bobbi died in 2015 at the age of 22. She was found unconscious in her bathtub, so similar to her mother’s death. Bobbi was kept on life support for several months but was finally let go.

The reality show Being Bobby Brown proved to be an incredible eye opener. Up until that time, there were rumors of Whitney and Bobby’s drug use and Whitney had been in rehab several times. The realty show taped over 6 months in 2005. It documented the crazy life of Bobby and Whitney proving that Bobby had an inflated ego and that alcohol and drug use was prevalent in their lives.

Against the advice of many, Whitney sat for a televised interview with Diane Sawyer in 2002. Whitney had erratic behavior, weight loss and many cancellations over the course of a few years, and the public and media suspected drug use. Whitney admitted drug use in the interview and her behavior confirmed to many that she was, in fact, using alcohol, cocaine, pills and marijuana. Most memorably, Whitney denied ever using crack cocaine, telling Sawyer “crack is whack”. Her surprising admittance and her demeanor during the interview were shocking.

Sawyer addressed many of the issues the public was concerned about. Whitney appeared incredibly thin during a Michael Jackson Tribute Concert. She failed to show for a tribute to Clive Davis with whom she had signed her first recording contract with at Arista. Whitney was fired from appearing at the Academy Awards. During the interview, Whitney downplayed all of the concern about her health and drug use.

Just before her death, Whitney filmed the remake of “Sparkle”. She played the mother of Jordan Sparks’ character. The remake of the classic 1976 film was released in August 2012.  The film didn’t do particularly well in theaters.  However, it’s another example of Houston’s multi-talented repertoire.  She was an underrated actress, surely outshined by the fact she had one of the best singing voices of all time.

Whitney was found dead on February 11 2012 at the Beverly Hilton Hotel. She was found face down in her guest room bath tub filled with water. Her official cause of death was drowning and a heart condition. It was determined that the heart condition was caused by cocaine use. Her death occurred on the eve of the Grammy Awards and put a pallor on the event. The night of her death, Whitney was scheduled to appear at Clive Davis’ pre-Grammy party. Her loss was felt greatly that evening and the following night at the Grammy Awards. There were many tributes to Whitney during the program.

Whitney’s memorial service was held at the New Hope Baptist Church in New Jersey. The Church she began her public singing as a soloist in the Junior Gospel Club. The memorial was invitation only. Bobby Brown showed up at the funeral uninvited and was escorted out. Whitney is buried in a New Jersey cemetery. Her tombstone includes lines from her iconic hit I Will Always Love You.