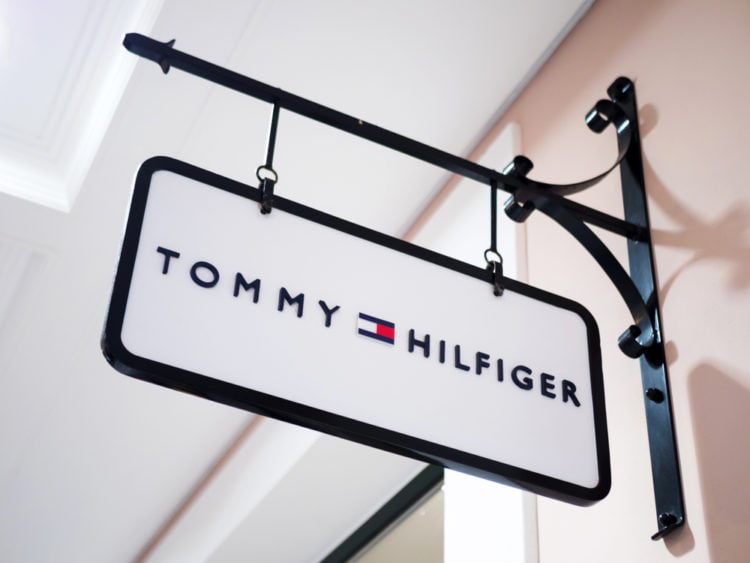 Fashion designer Tommy Hilfiger represents the living embodiment of the American Dream – a New York native who started with nothing but who worked his way to the top through sheer grit and determination. Like the man himself, the Tommy Hilfiger brand is as American as apple pie… as, indeed, is the brand logo. With its red, white and blue color scheme, it’s got USA written all over it. But is it as simple as it seems? Is there anything more to this world-famous logo than a statement about the brand’s heritage? If you’ve ever found yourself pondering the same question, you’ve come to the right place for answers.

To understand a logo, you have to understand the brand behind it. In the case of the Tommy Hilfiger logo, you also have to understand the man. Born in Elmira, New York, in March 24, 1951, Hilfiger, was, not to put too fine a point on it, an unremarkable child. Having just about scraped through high school, he followed his parent’s bidding and attended GST BOCES Bush Campus in Elmira for a brief time, but dropped out mid-way through.

But while university held no attraction to the teenage Hilfiger, there was one thing in particular that did: fashion. Inspired by the style’s choices of his heroes Mick Jagger and David Bowie, he began scouring the stores of Manhattan for the same trendy bell bottoms and leather jackets. Some of them he wore himself. Others he sold to his friends. Seeing an opportunity to combine his love of fashion with turning a buck, he opened his first store, “People’s Place”, in 1971. At the time, Hilfiger was only 20 years old. His youth, combined with his complete lack of business knowledge, led to mistakes, mistakes which eventually led the store to go bankrupt six years later.

But the end of People’s Place didn’t spell the end for Hilfiger. In 1979, he set up a design team under the name “Tommy Hill”. A few years after that, he met Mohan Murjani, an Indian textile magnate who was looking to get into men’s clothing. With Murjani’s backing, Hilfiger launched Tommy Hilfiger Corporation, debuting his signature menswear collection in 1985. The 1980s and 1990s established Hilfiger as one of America’s top home-grown talents. But it hasn’t all been smooth sailing. Along the way, there have been challenges, knockbacks, and risks that haven’t always paid off. But somehow, Hilfiger and his namesake label have prevailed. As has that iconic logo….

The Introduction of the Logo

When Hilfiger launched his first collection in 1985, he didn’t do it quietly. After hiring advertiser and graphic designer George Lois to help him come up with a campaign to accompany the launch, the pair settled on a huge billboard in the center of Times Square. After making the bold decision to buck the trend for featuring models on ads, Lois and Hilfiger made the even bolder decision to feature the name of three of Hilfiger’s competitors instead.

“In most households, the first three names are household words. Get ready for another. His name (hint) is Tommy. The second name is not so easy. But in a few short months everybody in America will know there’s a new look”, the hangman inspired campaign read.

Accompanying the words was the first visual representation of the Tommy Hilfiger logo ever seen. With its patriotic color scheme of red, white and blue, here was a logo that didn’t just whisper USA, but that took the brand’s American heritage and put it front, left, and center. “When the brand launched, I teamed up with Lois for a series of ads that compared me to the designers I’d always idolized,” Hilfiger has since reminisced. “I’d I’d be lying if I said I was entirely comfortable with it. But George convinced me to go for it. It worked.”

It did, indeed. As anothermag.com comments, the bold logo and the game of hangman (around which the ad revolved) proved a simple, compelling image that caused enough of a stir in the fashion press to achieve the desired object – Hilfiger had arrived, and the world was left in no doubt as to what he represented.

H is for Hilfiger

As 1000logos.net comments, anyone familiar with the International Code of Signals will have a flash of recognition when they see the Tommy Hilfiger logo. The white and red fields in the central part of the logo are borrowed from the International Code of Signals’ flag “H” (“Hotel”). When used along, it means “I have a pilot on board.” In this instance, of course, the “H” stands less for ‘pilot’ and more for “Hilfiger”.

The Times Square hangman campaign revolved around the two most important elements of the Hilfiger label: America and the brand’s logo. Over the years, the logo has undergone a few minor modifications, but it’s still recognizable as the one used on the now iconic campaign of 1985. At its center are the colors, a deliberate choice to place the emphasis firmly on the brand’s American heritage. Over 30 years after its creation, the palette is still the same, with the only update reflected in a change from the white letters of the original wordmark to the blue ones of today. One other minor modification to have happened over the years is a reduction of the typeface size – a purely practical amendment that allowed the wordmark to fit more precisely into the brand’s flag.

Sometime in the early nineties, Hilfiger flirted briefly with the idea of changing the famous logo. As logos-world.net notes, the period represented one of the most challenging in the label’s period. Sales were down, creditibility was at an all-time low, and the flagship stores in Beverly Hills and London had been forced to close. Believing that the market had moved away from the logo-heavy streetwear of the 1990s, Hilfiger considered doing away with the bold, tri-colored emblem and replacing it with something a little less patriotic and a little more elegantly international. Fortunately, he reconsidered the decision prior to the change being realized, and today, the emblem is still an integral part of the label’s identity.

20 Things You Didn’t Know about Outschool

A Closer Look at the HondaJet 2600 Concept

The 20 Best Things to do in Akron, Ohio

The 10 Best Reading Chairs to Relax In