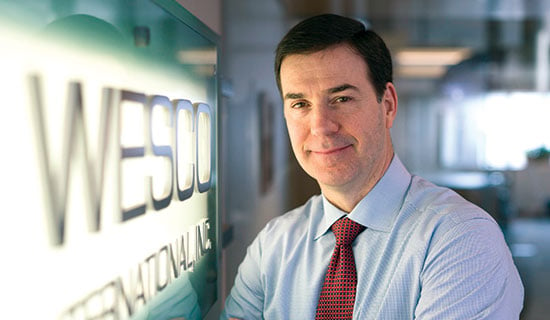 WESCO International prides itself in being the multinational distributor of electronics and other services. However, to achieve such massive success and worldwide recognition, someone must be at the helm to lead the company accordingly. Currently, John J. Engel holds the reigns, and for anyone who does not know much about this CEO, these few facts will be insightful.

1. He has an MBA from the University of Rochester

John is among the notable alumni of the University of Rochester since he graduated from the institution in 1991 with a master’s degree in business administration. The university ranked as number 33 in the 2019 edition of Best Colleges. Before doing his masters, John attended Villanova University for his bachelor’s degree in mechanical engineering and graduated in 1984. The fact that the Catholic university only accepts outstanding students with a GPA of 3.86 on a scale of 4.0 is an indication that John was a brilliant student.

When John became the CEO and president of WESCO International, it was the biggest promotion, but it could not have come at a worse time. At the time, the Great Recession was beginning leaving businesses uncertain of what to expect. With the tough economic times, the demand dropped, and prices fell as the major customers of WESCO cut their expenditure by nearly half. Consequently, sales for the company dropped by 25%, forcing WESCO to adjust its cost structure by reducing the workforce and closing down some of its branches, while consolidating others.

4. He is a Director of United States Steel Corporation

John is not only the CEO of one of the largest distributors of industrial communications and electrical products and services in the world, but he also is the director of another leading steel production company, United States Steel Corporation. Armed with his bachelor degree in mechanical engineering, John has the requisite knowledge to hold the director position in a company that was once the largest corporation and steel producer in the world.

5. He also is the President and chairman of WESCO International

On March 10, 2011, the board of directors announced that John Engel would take the office of the chairman of the board effective 25th May 2011. The appointment came after careful consideration and John took over from Roy W. Haley who continued being the chairman until May 2011. Two years before in September 2009, John had been appointed as the CEO and president, also taking over from Roy W. Haley.

In 2009, John received $591,828 as his base salary, but according to Pittsburgh Business Times, that amount increased to $725,000 in 2010, giving John Engel a total compensation of $4.3 million. The base salary increased further in 2011 when the board of the compensation committee approved a base salary of $800,000 for John. Since the board of WESCO International believes that the executive compensation package should go hand in hand with the strong performance of the company, it offers not only a base salary but also long-term equity incentives and cash bonuses. Consequently, all executives receive a $12,000 car allowance and John’s bonus for 2010 amounted to $1.2 million while other benefits were $13, 276.

7. He is a member of the Business Roundtable

The Business RoundTable brings together CEOs of the major corporations so that they can brainstorm on the best business public policy and promote it. It is the brainchild of John Harper, CEO of Alcoa and General Electric’s CEO Fred J. Borch who founded it in 1972 after having concerns about the increasing public hostility towards corporations. It is the organization that prevented the CEOs and the board of directors from becoming more accountable to stakeholders, and for the reduction in corporate taxes.

8. He is a member of the Business Council

John’s capability as a CEO is undoubtedly appreciated given that he also joins another group of world business leaders as a member. The business council dates back to 1933 and was founded by Sidney Weinberg, an investment banker, and Daniel C. Roper, the Secretary of Commerce. The members hold meetings a few times in a year to discuss high-level policies regarding professional, leadership, and intellectual development. According to its executive director, the organization has a high level of personal engagement with its members and acts as a critical voice for the business community. The fact that it is limited to 200 active members goes to show just how much John’s competence is recognized.

9. He has held other executive positions in leading corporations

10. He is a member of the National Association of Manufacturers

The National Association of Manufacturers is over a century old having been founded in 1895, and its objective is to enhance the manufacturers’ competitiveness by shaping the regulatory and legislative environments. Since John Engel has been in the manufacturing industry for so long, it is was in his interest as well as other manufacturers to become a member of an organization that encourages increased manufacturing and international trade. In the United States, the National Association Manufacturers is the largest and oldest broad-based industrial trade organization