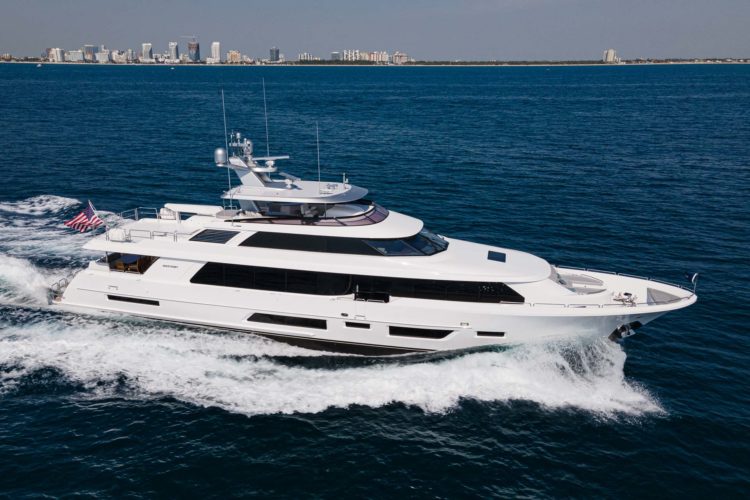 Superyachts are a symbol of status. They show off not only a person’s wealth but also are imposing monuments to their position. According to Forbes, they are “custom-built creations that represent the pinnacle of creativity, craftsmanship, (and) luxury.” The sheer size makes them more intriguing but it’s the interior that differentiated one a yacht from another. Moreover, the craftsmanship and the classic nature of some of the vessels make them timeless.

Westport Yachts was founded in 1964, building commercial vessels for Salmon fishers. However, after a decline in the industry, they began making other commercial crafts, including ferries. According to Atlantic Yacht and Ship (1), they produced 200 ships. However, in 1977 Westport Yachts began to notice a significant economic shift. So, they changed business models and started manufacturing composite yachts between 98 to 130 using the modular construction method, a technique they pioneered. Over the last half-century, Westport Yachts has become one of the most important ship’s company prides itself on its innovative designs, including cutting edge technology which places them at the four front of the superyacht industry. Much of their process focuses on creating faster and larger vessels than other yachts the same size. Moreover, they have perfected their process so they can build one in weeks and not months. One of the ships they made is the 112-foot yacht called Bookends, also known as Westport 112.

According to Robb Report, Bookends is one of only 62 launched yachts. Three others are in production. Thanks to the customers, this yacht outranks its competition. Since yacht owners like things to look a certain way, they are hesitant to change anything about their vessel. However, since this model came out in 1994, Bookends needed a modern update. As Westport Yachts considered making the 112 over before purchase, they had many people asking if they could add different design options. This guided the company down the path to creating a modern yacht. Everything about the interior of the craft has changed from the last model. Nonetheless, they left the external structure alone since it had not been transformed over twenty-seven years and customers were still enamored with the model.

The company’s naval architects increased the exterior windows and added more, giving the vessel a more open feel. They said additional sunshine on the water by replacing the portholes with windows approximately three inches bigger. This started off on the right foot, giving the exterior a modern feel without changing its overall shape. The next revamp was the staircase, changing the dated staircase to a linear one that helped create a palatial feel, a top priority. Other changes were made to help create more space; they took some corners and got rid of the oversized dated cabinets. Once they had more room, they began taking the aesthetic to the 21rst century.

One of the hallway ways has a mural of reef sharks that are the same size as those that could be swimming under the boat against a blue coral reef. The company added a similar mural below deck, a school of fish. Keeping with the ocean theme, they added sand dollars to the main wall. These features will be part of their modern design on models going forward. Throughout the yacht, surfaces were also replaced with stones and additional sculptures to create a cohesive look. Everything remains a blue theme since that is what most people typically associate with sea-faring life. Bolton, the ship’s owner, added other features, including a marble countertop that flowed over the surface like an ocean wave. To complement all the other elements, he wanted to create a focal point. The new design flows seamlessly into the main suite and bathroom, a light grain wood that eliminated the dark and crowded bathroom. With the addition of marble, the opulence was complete.

Partway through the design process, Bolton purchased Bookends. He was sentimental about the iconic ship since he had been on one when he was a child. However, he also remembered the dated design, including leather-colored handles and horizontal wood grain paneling. He loved the country-style kitchen that went with some of the rustic features of the murals and sculptures. Open kitchens have been a staple of Westport yachts since their conception. They feel that it shows off the American style of entertaining in the kitchen versus someone in Europe who prefers a private chef. However, he requested the sand dollar be replaced with colored glass spheres.

When the new owner saw the new design, he was pleasantly surprised because he remembers the old interiors. Even though he saw many elements of European craftsmanship in the interior, the sturdy build was uniquely American. Although he loves the new design from stern to bow, his favorite spot is the pilothouse, another area designed for get-togethers. It’s called the pilothouse because even though it has lounge chairs, it also houses a helm chair and navigation console. There were a few finishing touches he requested to personalize the ship. First, he wanted the height of the side lounge lowered to add more light. Then he wanted another mural similar to the ones in other parts of the yacht. Lastly, he tried to add lucite since it’s evident in the day but has an iridescent glow at night.

Westport’s next push is to work on interiors that focus on sustainable materials, eliminating materials like leather and natural woods. Everything inside the yacht will either be repurposed or recycled. This will help a new generation of yacht owners gravitate towards purchasing one of these beautiful craftsmanship displays and wealth. Much like the company’s decision to switch from manufacturing commercial boats to pleasure yachts, these steps will help keep them at the forefront of the industry. Although many people only dream about owning a yacht, especially a superyacht, looking at these boats is much like looking at a dream house you can’t afford. It’s a tangible way to daydream. Although Lifestyles of the Rich and famous are gone, we have a plethora of media at our fingertips, helping us explore a side of life that is only part of our wildest dreams.