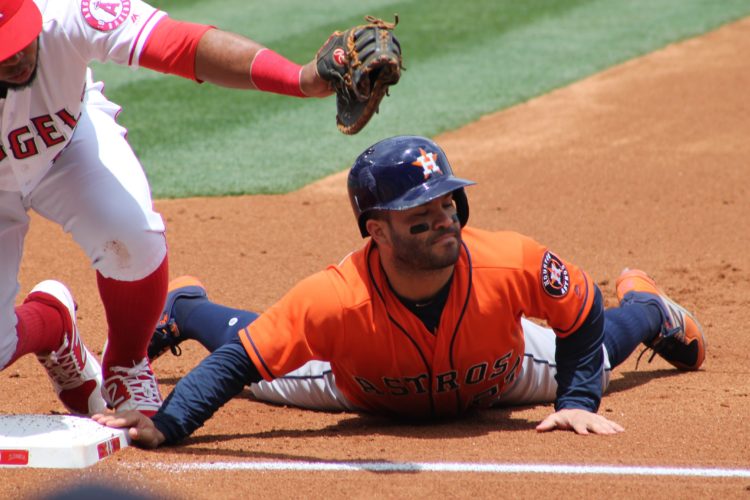 Fellow Major League Baseball players and the rest of the professional sports world are sounding off this week on the Houston Astros’ sign-stealing scandal. The focus, which started on Astros players and front office personnel, has now shifted to the front offices of Major League Baseball. Prominent sports figures, not just in baseball, have been voicing their opinions on how lenient the league was in their punishment of those involved in “Codebreaker”. NBA superstar Lebron James took to Twitter to voice his opinion on commissioner Rob Manfred’s handling of the scandal,

“Listen I know I don’t play baseball but I am in Sports and I know if someone cheated me out of winning the title and I found out about it I would be F*^king irate! I mean like uncontrollable about what I would/could do!” James wrote on Twitter.
“Listen here baseball commissioner listen to your players speaking today about how disgusted, mad, hurt, broken, etc etc about this. Literally the ball is in your court(or should I say field) and you need to fix this for the sake of Sports! #JustMyThoughtsComingFromASportsJunkieRegardlessMyOwnSportIPlay”

This post by Lebron is more meaningful than just a pro athlete voicing their opinion. The precedent that something this serious goes without a heavy punishment isn’t just a baseball issue, it’s a threat to professional sports in general. Major League Baseball’s handling of this issue and the feedback on public platforms poses a serious threat to the notion that cheating, well, isn’t that bad.

Sadly, the words “cheating” and “baseball” are not strangers to one another. Major League Baseball has a long history of foul play that dates back to the early 1900’s. At that time, baseball was confronted with different kind of cheating scandal that involved players being paid to throw games. The infamous Black Sox Scandal is one of the most storied cheating controversies in the history of US professional sports. Members of  the 1919 Chicago White Sox were paid by gamblers to throw the World Series. Despite being acquitted in trials, eight players were banned from baseball for life by first ever MLB commissioner Kenesaw Mountain Landis. As the years rolled on more issues surfaced including the Pete Rose’s betting and most recently steroids. It would not be fair to single Major League Baseball out for its history of foul play as almost every industry is guilty of something equivalent. However, it’s baseball’s evolution of punishment on the perpetrators of this foul play that raises some eyebrows.

Does it Pay to Cheat?

The “Steroid Era” in baseball is a tricky situation to discuss when we’re talking about cheating. The fact of the matter is; there is little doubt steroids were used by many players over the course of a few decades. It was a situation that almost necessitated the use of performance enhancing drugs to keep yourself relevant in the game (unless you were a super talent like Alex Rodriguez). The game, however, is littered with one-year wonders who have steroid guilt written all over them…. that got paid nicely for something that wasn’t legitimate. We’re talking about guys like Brady Anderson, who hit 50 home runs in 1996 and never had another season over 30 dingers. Forget about the one-hit wonders for a minute and focus on the most notable steroid users – Roger Clemens, Barry Bonds, Manny Ramirez, Jason Giambi and Alex Rodriguez to name a few. The article poses the question does it pay to cheat in baseball. Here’s your answer:

Those numbers are the career earnings for the aforementioned notable steroid users. None of them are in any legal trouble (related to steroids) and none of them had to give the money back. With really no repercussions, it paid to take steroids for not just these guys.

This article is not meant to advocate cheating in professional sports. The sole purpose here is to simply make a point that cheaters are prospering in Major League Baseball in today’s game. In the early 1900’s, that wasn’t the case. Penalties were swift and absolute. Fast forward to the present – The Houston Astros are found guilty of cheating – the organization retains its World Series title and the players receive immunity. That immunity includes retaining their statistics, which in turn is their case for contract negotiations. HOWEVER, a major point to note is that if you’re a player that was found guilty in this sign-stealing scandal how likely are you to be signed by another team in free agency. At first glance you’d think – no shot, but not so fast. If professional sports has taught us anything they’ve taught us that organizations are willing to turn a blind eye to a player’s trouble past – see Michael Vick.

Lebron James is 100% right. He’s not making a point to say something just to be heard. His Twitter post has a purpose and that purpose is to put a hard stop to activity that jeopardizes the integrity of the game and livelihood of other players. Lebron’s point about listening to other players is very important because those guys are doing things right and have lost something (playoffs or championships) at the expense of those that were cheating. Furthermore, the punishment laid down (or lack thereof) opens the door for future issues. Players can sit there and say, “look what happened to the Astros players” – nothing. It sets a precedent that players can cheat, get rewarded with new contracts, win games and nothing will happen. Commissioner Rob Manfred had a chance to set a precedent that cheating will have serious consequences that include financial losses, yet he didn’t make a statement.