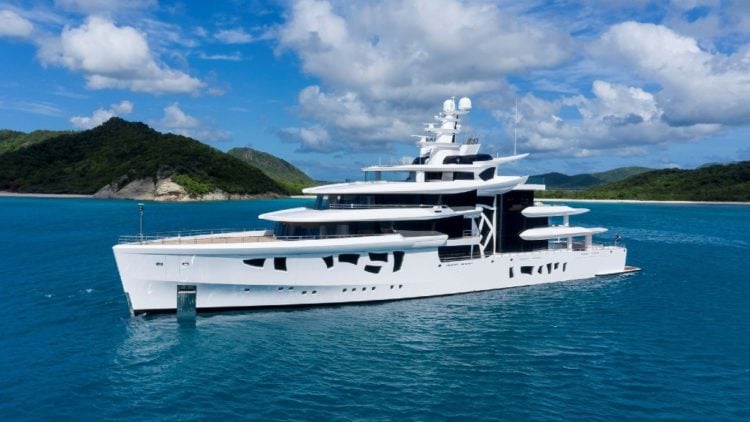 While the rest of the world panicked after the COVID-19 lockdown order, one family had the time of its life aboard its yacht. Mike Lazaridis, owner of Artefact, planned on spending three months on the boat every time he went cruising. Unfortunately, the pandemic changed that, and he ended up on a nine-month voyage on the 262-foot superyacht Artefact. It is currently the highest volume 80-meter superyacht worldwide at 2,990 gross tons so let’s take a closer look at it.

In 2018, Charter World published that Nobiskrug would unveil the name and design of its latest superyacht. The yacht was referred to as “Project 790” and was first unveiled at the Monaco Yacht Show in 2018. As per the article, the managing director of Nobiskrug revealed that the superyacht’s owner focused on having a vessel with as many environmentally friendly features as possible without compromising on the distinctive state-of-the-art hybrid aspect. Consequently, the yacht can recycle wastewater for use as technical water, courtesy of the advanced filtering systems. It also avoids the destruction of the coral reefs by making it possible to stay stable without dropping the anchor. It also utilizes solar energy through 248 square feet of solar panels, ensuring that it can operate without internal combustion engines for a limited time. Usually, the solar panels generate enough power to keep the lighting on at night. Once the panels are drained, the lithium batteries and variable speed generators kick in to provide more than enough power for optimal operation. Due to all these environmentally-friendly features, Artefact became among the first vessels to meet the International Maritime Organization (IMO) Tier III emissions regulations.

According to Boat International, Artefact started a trend. Nobiskrug sales and marketing director, Fadi Pataq, said that a client was impressed by the yacht’s use of frameless glass in the VIP cabin’s outer walls. For this reason, the client wanted more glass in his project. As other sources published, the amount of glass used on Artefact is a first in the world of yachting. While the finished product is breathtaking, the use of frameless glass still had its challenges, such as sound reflection, solar heat gain, weight, and optical properties. The yacht was constructed with sound absorption as a priority to address the sound reflection issue. Thus, there is a carpet in the owner’s suite that reduces noise levels to whispers. Solar heat gain is eliminated through two panels of bronze glass and a mirror layer that ensures unobstructed views while reducing the amount of heat.

The owner wanted the best seeing that it was his first and the last yacht; thus, there was no way he could leave anything to chance. Besides, for a person worth nearly a billion dollars, he did not want any cost spared at the expense of comfort, luxury, and most of all, conforming to his desire for an environmentally friendly yacht. As Captain Aaron Clark revealed, the owner did not want a boat that looked like everybody else’s; he was going for a future-proofed vessel. Nevertheless, not everything is a first with Artefact because Clark said he wanted a traditional aspect incorporated and reimagined to have an unprecedented experience. Some features include a Jacuzzi and plenty of deck space, enough to serve as a helipad and double up as a sunbathing area. According to Superyacht Times, it has four decks. The hull is made from steel, while the aluminum makes up the superstructure. Reymond Langton Design Ltd was in charge of the interior while the exterior designing was left to Gregory C. Marshall Naval Architect Ltd. The interior designer even boasted that it is one of the cleverest designs they have ever done.

In March 2020, Artefact completed sea trials in the Baltic Sea, after which she was delivered to Lazaridis. Before the delivery, a lot of time had been spent in constructing it to meet the owner’s specifications. According to Yahoo, Clark and Lazaridis spent 18 months developing the ideal concept for Artefact. Once the multi-millionaire was satisfied, he signed the contract, and it took them another year to tank test and investigate stabilization systems. It took them an additional eight months to build the family deck to scale, a feat that cost $110,000, but money was no object. The move was essential because it enabled them to figure out how big they had to construct the boat to have enough space in all the rooms. After the deck construction was complete, the volume of the boat increased to 2,900 gross tons from 500 gross tons. Clark visited seven shipyards with the concept and settled on Nobiskrug because it had the design and pedigree required. While the amount of time spent building the deck and tank testing may seem a bit too much, you would be surprised that the owner started toying with the idea to construct Artefact in 2013.

Lazaridis had chartered yachts before and taken his family on cruises, but by 2013, he wanted his own. The idea crept into his mind after he admired pictures of yachts on a Boat International magazine, left by his friend on a coffee table. He, however, wanted his entire family to be part of the process because Artefact was theirs to enjoy. At first, some family members resisted because they suffer from motion sickness, but eventually, everyone was onboard. Lazaridis collaborated with Clark to research the latest design and technologies to make the family comfortable and ensure that the motion sickness concern was eliminated. After going to trade and equipment shows and seeing many yachts, they settled on what would become Artefact’s concept. Clark said that due to the extensive planning, the building process only changed 1.1%, which is quite admirable considering that most yacht constructions have 30% adjustments. Eventually, the cost of the yacht was $150 million and Lazaridis spends at least $10 million in annual running costs.