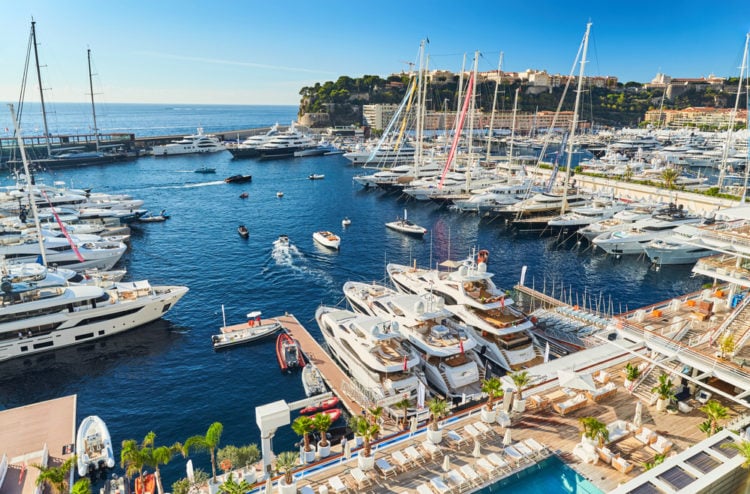 The Monaco Yacht Show (MYS) is quickly approaching. This year it runs from Wednesday, September 22nd to Saturday, September 25th. Yachting enthusiasts, yacht builders, the wealthy, and the superwealthy will gather to show off their crafts or shop for the perfect new superyacht to suit their lifestyle. His Highness, Prince Albert II of Monaco, has recognized and supported this uber-luxury event since its 1991 inception. Known as the most prestigious display of superyachts in the world, this posh trade event is organized by Informa, a British events company. Whether you love superyachts for their deluxe features, or the sheer size and power, there’s a lot to see at the MYS. Let’s take a deeper look at the history of the Monaco Yacht Show.

Where It All Began

Monaco has always been an ideal and idyllic location for yacht enthusiasts. More than a century ago, it became a significant tourist destination. Yachting regattas and luxury events drew the turn of the century elites to the stunning blue waters. By 1926, Port Hercules, Monaco’s yacht harbor, was installed in a deepwater bay at the foot of Le Rocher. However, it would be another sixty-five years before the Monaco Yacht Show came onto the scene. Created by Maurice Cohen, head of Media Plus, the first Monaco Yacht Show opened in 1991. WebArchve.org has early press releases about the show. At first, the show was broker-oriented, but it has grown over the years to include a wide range of businesses in the luxury yacht sector. Repair yards, designers, and fitters, among many others, visit annually. Maurice Cohen and Media Plus had competition during the early years from the Superyacht de Nice event. Within three years, Media Plus sold the show to IIR, which owned the SdN event. Sadly, that event didn’t last, but the MYS stood the test of time. When the event began, the standard for the yachts was that they must exceed twenty meters in length. The base standard for a craft to qualify as a superyacht has changed over the years as ever-larger vessels join the oceans. In 1991, a forty-seven-meter yacht would have ranked in the top one-hundred megayachts in the world.

How One Countries’ Collapse Created a Business Boom For Yachting

The collapse of the USSR was part of current events when the Monaco Yacht Show was getting started. The history of what happened in the world is deeply tied to the success of this event. One of the unexpected results of this governmental change is that it helped pave the way for growth in the megayacht sector. The world no longer felt the USSR’s reach on the same scale as it had been previously. For example, before the collapse, Iran and the USSR controlled all of the Caspian Sea. That control made movement complicated in the region. As a result, the USSR cut off numerous adjoining countries’ access to the Caspian Sea. The impact the former USSR had on yachting spans beyond the control of the area. The nation had also contributed to limiting other relevant industries such as global fuel production and distribution. Megayachts need easy access to large quantities of fuel. Arguably, the success of the Monaco Yacht Show and mega yachting as a whole in its current iteration results from the Soviet Union collapse. Essentially, the MYS got lucky with its timing.

It wasn’t always easy for the Monaco Yacht Show. The heavy focus on brokers was initially a great choice. However, the changing world economy and competition from other yacht shows eventually led to issues that could have caused the MYS to go under. By 1996 charter season extended into September, when the MYS was held, which caused a problem. People who would otherwise be at the show were out on chartered vessels, limiting visitors. Super Yacht North West in Kirkland was proving to be serious competition for the show, and agency representation saw high turnover rates. These instabilities and distractions did not bode well for the broker-based performance. It was time for a change if the MYS wanted to stay afloat. IIR decided to focus all its energy on superyachts, which turned out well for the show. However, they decided to use the Super Yacht de Nice as a tradeshow at the same time. While the Super Yacht de Nice show eventually fell into obscurity, the MYS thrived on its new; bigger is better platform. Over the next few years, the show would grow and change to include charters and vendors of all kinds. Everything related to super yachting would find a home at the opulent exhibition.

By the early 2000s, the show was seeing fifteen to twenty thousand annual visitors. Vendors in 2002 would take up 300 stands over a surface area of over 4,500m². According to Yacht Harbor, “In June 2005, Informa, the events and training business, acquired IIR Holdings, parent company of the Monaco Yacht Show, for $1.4 billion.” Since then, Informa has overseen the event with great success. In 2016, the Monaco Yacht Show made another massive leap forward when it included Car Deck. This exhibition space for luxury automobiles features only the best brands and latest luxury cars. After all, if you’re going to have a garage to bring a vehicle so you can drive around in port, then you will need a top-tier vehicle to place inside. Celebrities and other famous faces abound at the well-attended event now, despite setbacks in the 1990s. Most years, dozens of new vessels make their world debut. Some are for sale, others display, and many can be chartered if the price is right. Beyonce made waves of her own at the 2018 Monaco Yacht Show when she chartered a yacht for $1.29 million per week.

Although the Monaco Yacht Show is technically open to the public, it will cost you $330 for a day pass or about $1,100 for the four-day professional pass. Attendees come from all over the globe to see the mega-yachts, upgrade their vessels, or sell yacht-related services and accessories. However, 2021 is special for the MYS because it marks the thirtieth anniversary of the MYS.