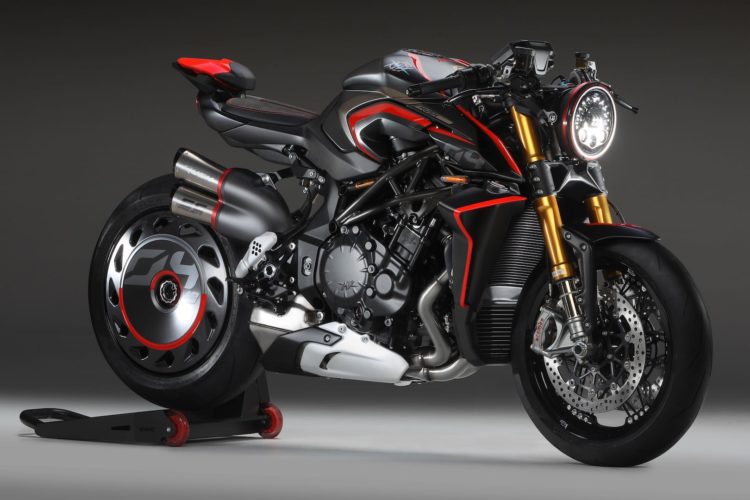 MV Agusta has been keeping the world supplied in special motorcycles models that take them a bit outside of the box. Their latest trophy is the 2020 MV Agusta Rush 1000. The name of the bike is simple but it only takes 2 words to signify the intention of the bike. It conjures images of moving from point A to point B in a hurry. The Italian factory is known throughout the globe for producing one masterpiece after another and here are 10 things about their latest contribution that you probably didn’t know.

The 2020 Rush 1000 is themed to pay its respects to the drag racing scene on steroids. It’s a special bike inspired by the Brutale 1000 RR for 2020, only in a stripped-down iteration that lightens the load and makes it a powerful dragster that’s modded for street use. The 998 cc engine has been tweaked to generate 208 horsepower which falls just 4 hp short of the Brutale 1000. It’s one of the most powerful streetfighters in its class on the market. Thanks to the use of ultra-light aluminum, carbon-fiber and titanium components, this stripped-down bike will scream down the road. With ample power to nudge it along, the 2020 Rush 1000 is one fast motorcycle. The brand is claiming that official testing has pegged its top speed at a whopping 190 mph.

Although the Rush has retained much of the DNA of the Brutale, as it’s a stripped-down and enhanced member of the family, it’s design features a few unique departures. This bike is adorned with carbon-fiber in its bodywork to give it a unique look that distinguishes it from other Brutales. Of particular notability are the carbon-fiber leg shield, clip-on handlebars, winglets, and the wings that enhance aerodynamics with their radiator wrap-around styling. When you first glance at the 2020 Agusta Rush 1000, you see a sculpted masterpiece of beefy power. MV Agust engineers achieved this beast-like aesthetic through the use of dedicated CRC-designed parts down to the fasteners. CNC machining produced the hand-lever controls, footpegs, and the fuel filler cap for precision design work to achieve the desired aesthetic for each component.

The good news is that production is set to commence in June of 2020 for the Agusta Rush. If you’re chomping at the bit to get in on this limited edition model, it’s time to start making your reservations now. We learned that there will be a strict production limit of just 300 models of the Rush 1000 to be distributed throughout the world. The odds of them going like hotcakes is fairly high so this may be a tough new bike to get your hands on if you’re not among the first to enquire. The bike caused quite a stir when it was first unveiled at the EICMA Milan Motorcycle show and there are anxious anticipators waiting for the green light for purchase.

6. The Rush 1000 has some interesting modifications The Rush 1000’s 998 cc inline-4 has been revamped with some interesting modifications that set it apart in the motorcycle world. MVA confirmed that the engineers use titanium connecting rods and radial valves, which is a first for production bikes. This is just one more feature that makes this a standout model that shines among all other bikes in its class.

Not to throw gas on an already burning fire, but the MVA engineering team has also used a few tricks they borrowed by Formula 1 with the revised radial valves, connecting rods, and a totally revised combustion chamber. They’ve adopted MotoGP technology which lessens loads, mass, and engine inertia. To decrease the likelihood of a camshaft twist, it’s been equipped with a central camshaft chain. The wheel is a CNC machined aluminum type covered with carbon-fiber inspired by drag racers.

8. It has some nice with tech features Even a stripped-down bike is not complete without a few lightweight tech features. The Rush 1000 has its share including a 5’inch color dashboard (TFT in full color) and smartphone connectivity through the MV Rid App. The electronics won’t let you down either. It’s going to come equipped with 4 engine maps including custom, racing, race, and sport. You’ll also have wheelie control, launch control, cruise control, Bosch cornering ABS, electronically assisted gear shifter, and 8-level traction control.

If you’re not satisfied with the 208 horsepower you will have the option of adding the Rush Racing Kit. What this will do for you is to jack up the horses to 212, give you a revised ECU map and this optimizes power and the kit also includes a non-homologated titanium exhaust. It won’t increase the torque but this is already claimed at 86 lb-ft. The top speed won’t be affected either.

10. There are a few other features worth mentioning The Agusta Rush 1000 will come out with round LED headlights that have a built-in cornering functionality, a CNC machined aluminum fuel tank, and it comes stock with a titanium exhaust. The passenger seat cover is in a minimalist design. The suspension is a NIX EC Fork with EC TTX rear shock with an electronic Ohlins steering damper. MV Agusta has not officially announced the retail cost of the new Agusta Rush 1000, but it is expected to come in around $45,000 for the Rush and $32,000 for the Brutale 1000 RR. We’re expecting them to go fast once the gate is officially opened.