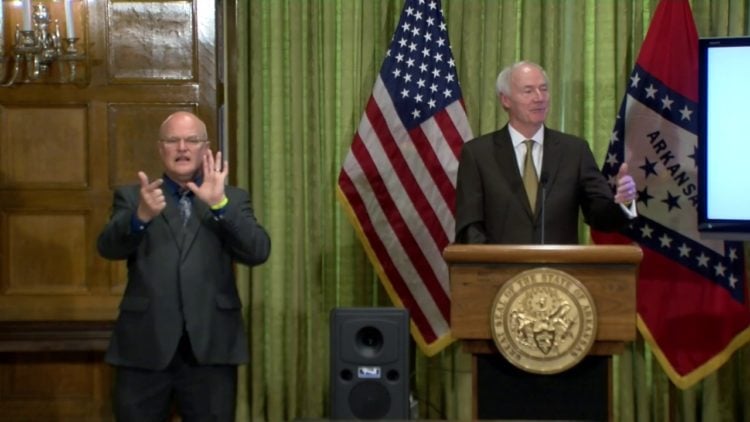 Asa Hutchinson is the 46th Governor of the State of Arkansas and a member of the Republican Party. He has recently made headlines with his refusal to issue a statewide stay at home order for Arkansas. He is one of the few state governors who made this decision and have resisted the political pressure to issue the orders, shutting down much of the economy of the states. He is an interesting public figure worth knowing more about. Here are 10 things that you probably didn’t know about Arkansas Governor Asa Hutchinson.

1. He is a native of the state of Arkansas

Hutchinson was born in the town of Bentonville, Arkansas on December 3, 1950. He is currently 69 years old. His parents named him William Asa Hutchinson. He grew up in the state and graduated from high school, but moved out of state to attended college for the first time.

2. Asa has an impressive education

Hutchinson attended Bob Jones University in South Carolina. He earned his bachelor’s degree in 1972. After receiving his undergraduate degree, he continued forward with his studies. He attended the University of Arkansas School of Law, and he earned his JD degree in 1975. This was impressive as it was just three years after completing his bachelor’s degree. While there are many men and women who have earned a JD degree, it’s not common to earn any kind of a doctorate in just three years after completing undergraduate studies. This shows that he learned quickly and was good at school.

After Asa Hutchinson completed his law degree, he passed his bar exam and became a licensed attorney of law. he set up a practice in Fort Smith where he served as an attorney for 21 years of his early career. During that time, Mr. Hutchinson represented his clients in over 100 jury trials.

Asa Hutchinson made history when President Ronald Reagan appointed him as the U.S. Attorney for the United States Western District of Arkansas. This was a historical event because Asa was only thirty-one years old at the time, and he was the youngest person to ever be appointed to that post. He was successful in his job and those who worked with him credited him with being aggressive in the prosecution of criminals.

5. Hutchinson is a brave man

We get a glimpse of who Asa Hutchinson is as a professional as well as a man. During the sensationalized James Ellison incident, he showed his true colors. Ellison led the white supremacist organization The Covenant, The Sword, and the Arm of the Lord, which engaged in a 3-day armed standoff with local officials. Asa Hutchison, in his role as US Attorney, took the lead in donning a flak jacket and walking into the grey to negotiate a peaceful conclusion to the tense event. This was a newsworthy event that made national headlines at the time.

6. Hutchinson was a representative

In 1996, Asa Hutchinson began his service in the United States Congress where he served three terms. During his tenure, he was involved in many investigations and proceedings. The House of Representatives appointed Hutchinson as a manager in the 1998 impeachment proceedings of then-President Bill Clinton. He resigned from his seat on August 6, 2001.

Prior to becoming the Governor of Arkansas, Asa Hutchinson was appointed as the head of the U.S. Drug Enforcement Agency. This was under the Bush Administration and it is why he resigned his seat in the US House. He couldn’t do both at the same time. He served as head administrator for the US Drug Enforcement agency until 2003. In 2003, President George W. Bush appointed Asa Hutchinson to the position of the Undersecretary for the Department of Homeland Security. During his tenure in the job, he was in charge of border and transportation security. He served at the post until 2005.

Asa Hutchinson is certainly not a newcomer on the political scene. Prior to being elected as the Governor of Arkansas, he served in a variety of political positions. He ran for the Governor of Arkansas position winning the election in November of 2014. He was so well-liked in his home state that when he ran for re-election for the next term, he was re-elected in November of 2018. This is his second term in office. This is the state that Mr. Hutchinson was born and raised in and he is well acquainted with the strengths of the state as well as the challenges that the government and residents face.

9. He stands firm on his decision not to issue the stay at home order

Hutchinson explained to the press why he has decided against issuing a stay at home order for the people of the state of Arkansas. While he remains open to doing so if the need arises, he has not seen evidence of the need. The state has a low density in population and the first confirmed case of coronavirus was just revealed the week of March 11. The disease was not widespread in the state, but he did take action. After the first case was confirmed, he did close the schools state-wide and ordered more testing for the virus. He also ensured that the people of Arkansas are aware of the need to practice social distancing and wear masks. A lockdown was not yet necessary and while he recognizes that there are other areas where lockdown is necessary, this is not yet the case in Arkansas. The number of cases in Arkansas grew to over 1,200 cases and 25 deaths which shows that COVID-19 has finally spread to Arkansas and it has done so within a short period of time. So far, the state is equipped with 80,000 hospital beds and the hospitalization figures show just 80 individuals. The peak daily death rate is expected to hit Arkansas towards the end of April.

10. Hutchinson is not defying presidential recommendations

Hutchinson has not gone against recommendations, he is just being cautious about the timing of his decisions. The President has repeatedly said that each state must handle their own decisions when it comes to issuing stay at home orders for their respective states. Asa Hutchinson has simply made a choice that resonates with the thoughts shared by other governors. There are a total of 6 states who have not issued this statewide stay at home orders, so he’s not the only one. It’s a matter of practicality, but mayors and counties have the authority to act in the best interest of their constituents.