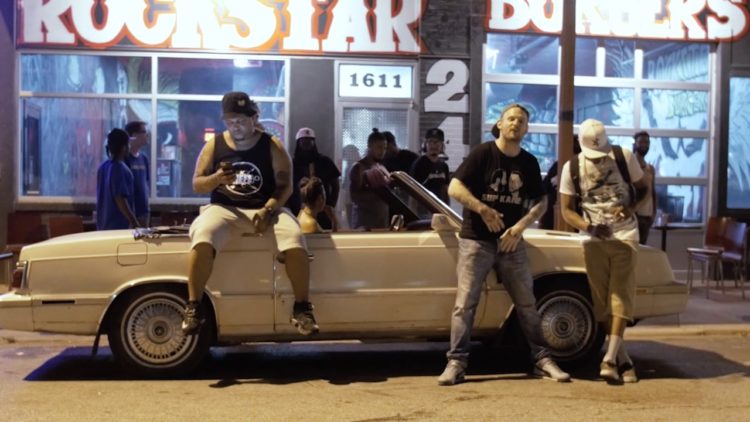 In the artistic world of hip-hop and rap music, you are as good as your bank account, as it gives you the bragging factor for your lyrics. Many rappers pull their perfect combination of vocals, artistry, and marketing skills to improve their pockets, with many becoming millionaires. Among the rappers who can comfortably rap about the millions in their bank accounts is Mac Lethal. According to Celebrity Net Worth, the rapper boasts of an asset worth of $2 million. This is an impressive amount, and many of his fans are interested to know how he achieved his millionaire status. Let us look at how the Mac Lethal net worth came to be, starting with his background.

According to Fandom, Mac Lethal was born David McCleary Sheldon on the 25th of July, 1981, in Kansas City, Missouri. His father was a musician and was an early inspiration for him to get into the world of music. His mother ran a boutique. He started rapping at an early age, and during his teenage years, he used to battle rap with fellow school mates and rival high school students from Kansas City. Once he completed high school, he became popular in the Kansas City rapping scene. Mac Lethal was part of the new hip-hop faces, gracing the early 2000s who took a different path from gangster rap. He rode on the popularity that Mid-Western rap was gaining as it had many artists who had excellent lyricism.

At the time, he was on the roster of HHI Recordings, which featured performers such as Genelec and Memphis Reign. Still, in 2002, he won the Scribble Jam rap battle, which was one of the most vibrant hip hop events in the Midwest. Afterwards, he joined Sage Francis in his 2004 tour. His defining moment came in 2006 when he founded his record label, Black Clover Records, with his long time friend Jeremy Willis. Willis brought his expertise from Datura Recordings, where he was a manager. In 2007, he released his sophomore album 11:11 through Rhymesayers Entertainment. The album received decent reviews from critics and fans, most of whom appreciated the lyricism, which featured humor and socio-political commentary. The album peaked at the fourth position on US Top Heatseekers: West North Central. From his music career, the rapper earned royalties from album sales and streams as he was among the pioneer artistes to sign up to digital music platforms. He also boosts his income through tours and bookings. Mac Lethal is also a songwriter, and there is a high chance that he has credits for some rappers’ works.

Mac Lethal is a television host, and has a show that he runs together with Amber Diamond – Binge Thinking. It airs on MTV2, since April 2016, and boasts of a dedicated fan-base. Binge Thinking is a game show that sees the two TV personalities visit different city’s party spots and drops challenges to unsuspecting patrons.

As earlier hinted, Mac Lethal was among the first artists to buy into the concept of digital streams and social media. He took advantage of the then developing platforms such as YouTube and Tumblr as a way to disseminate his content. On social media, he has a considerable following, especially on YouTube. In 2011, he uploaded a video of him rapping to Look At Me Now, a song by Chris Brown and Lil Wayne. The video went viral and garnered a lot of views, which translated to more subscribers. The stunt led to online interviews by reputable websites such as The Washington Post and CNN. The impressive number of followers speaks of potential earnings that he may have taken advantage of. He can earn through paid ads from YouTube and also as a social media influencer.

When it comes to holding the pen against the paper, he is excellent, as evident from his witty lyrics. He took this gift to the authoring field, where he wrote a book, Texts From Bennett. The book came out in September 2013 and had four out of five stars in Goodreads from 52 reviews. The book revolves around the text message screenshots that the rapper posted on his Tumblr account around 2011. The text messages were conversations of the rapper and his 17-year-old cousin, which packed an impressive dose of humor. He probably made some bucks from the sale of the book and further fattened his bank account.

Mac Lethal has a low key persona, unlike most celebrities in the hip hop scene. As such, it is hard to know if he has some business interests across various fields. There is a chance that he has some investments only that he does not let them out. He may also take up endorsement deals, especially when you see how big of a celebrity he is in social media platforms such as YouTube. On this video sharing platform, he has over 2.86 million subscribers and a total viewership figure of over 276 million.

MacLethal is one of the many artists who are sitting comfortably atop fortunes. He has a net worth of $2 million, and his music career is a significant contributor to this value. This article looks at his background and the various ventures he took part in, to make it to the millionaire ranks. Catch him on YouTube or Tumblr to see what he is up to.