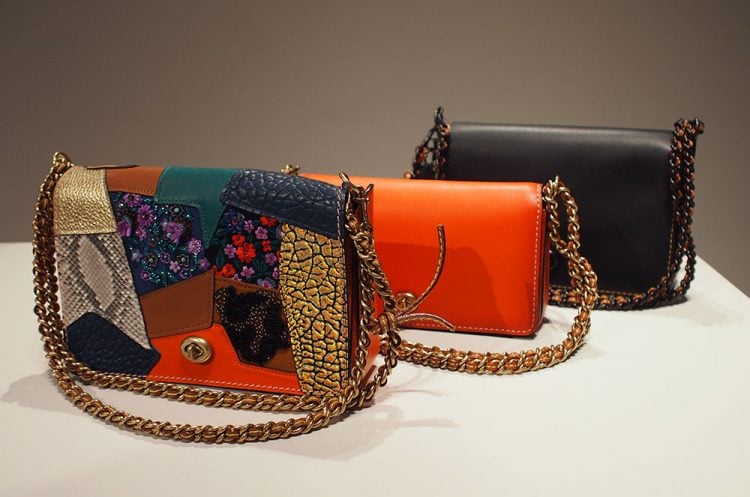 New York City based Coach was launched in 1941, and since then the company has become known for the high quality and style of its handbags. Traditionally, Coach purses were all about quality and fine details rather than maintaining a prestigious and exclusive image. However, over the years the brand has changed leadership and now it’s trying to go in a higher end direction, with projections that future Coach bags could cost between $2,000 and $5,000 each.

This is a far cry from the current price point that ranges from a few hundred dollars to just over $1,000, but the brand has released a handful of expensive collections in its history. Here are the five of the most expensive Coach purses that have ever been created. This handbag comes from a 2012 collection that was a result of Coach collaboration with famed designer Anna Sui. The line reflects her signature design principles and it was also a nostalgic venture for Sui, who has been wearing Coach purses for years. This collection included a number of stylish and roomy duffle bags including the Fleur de Lis, which is the most expensive. It’s black with a large tassel hanging off to one side, an embossed floral motif, and golden hardware. A dragonfly tag is also attached to the strap, which features rich, muted colors.

The hand tooled leather of the purse is attractive and well made, and the overall look of the bag has a boho appeal. This isn’t the purse you’d pick up to wear for a formal occasion, but it looks great and is a fun piece to have, especially if you’re a fan of both Coach purses and Anna Sui. This handbag’s design incorporates a number of different textures and was made in several attractive colors, including deep teal and dusty pink. It features short handles, a detachable strap, and has a look that’s at once chic and sophisticated.

When the Madison Caroline Dowel Satchel was first released, it was at the high end of the spectrum as far as the cost for Coach purses go. Still, the collection sold well. These days, your best bet for getting one is scouring auction sites and second hand retailers that specialize in designer wares. A 70th anniversary edition of this bag was released by Coach that sported embossed crocodile leather, a plum lining, and gleaming gold hardware, and it sold for $1,000. The Rogue is a profile for Coach purses that has been quite popular since it was released. It’s roomy and has a handle that verges on being chunky. Coach fans love this purse because it’s so versatile and is available in a number of colors and patterns. You can choose burgundy or black for work, mix it up with the Varsity Patch iteration when you want to be casual, or opt for the studded Western style to add an edge to your weekend attire.

Those who have tried out the Rogue have noted the high quality and thickness of its leather, which is sure to help it wear well over time — small details like this enable the line to have a higher price tag than other Coach bags. The fact that the Rogue holds its shape and doesn’t collapse when left to stand on its own is another high point.

The concept behind the creation of the bag was the brand’s own invented Coach girl, otherwise known as the brand’s ideal female customer. She’s stylish, free spirited, and apparently likes bags made of glovetanned pebble leather. Marketing schemes aside, the Rogue is a very well made purse and it has wide appeal.

This collection comes in a number of different sizes, from medium to very large. Most Rogue bags are made of pebble leather, but this pricey and limited edition model is covered in ostrich. Another exotic option is available with python skin, but it doesn’t cost as much. This is one of the more artful Coach purses available today, and its silhouette is based on the Rogue. The base of the purse is black leather with contrast stitching, and that’s where any plainness ends. This bag is covered in hand painted, die cut, whimsical flower petals that are made of leather. The colors incorporated into the flowers include solid black, deep plum, and python print. The strap of the Tea Rose Applique Rogue Bag is also covered in python print leather, and the blooms are accented with gold hardware.

If you look closely at the black background of the bag, you’ll see smaller embossed flowers. Two fobs are attached to this purse, one made of python leather with gold hardware, and another that’s solid black with gold hardware and a golden logo. This bag has a very playful look and has been popular with the under 30 set. Coach’s current CEO has stated publicly that the brand wants to take a turn towards being more exclusive, which basically means that Coach purses have become more expensive during the past few years. The prime example of this change is the pricey Coach + Billy Reid Crocodile Tote.

Being covered in exotic leather is no doubt what makes this bag five figures, but it also has a style that’s distinctive and refined. What’s more, the tote actually has the high end look of a bag that deserves such a high price tag.

Fortunately for those who wanted a piece from the collection but didn’t have $20,000 to spare, more affordable pieces were released as part of the collaboration. Leather wallets were $250, suede overnight bags were $800, and an attractive messenger bag made of pebbled leather cost $800.