Home
Lifestyle
Sneakers
What Are Nike Blazers For?
Prev Article Next Article 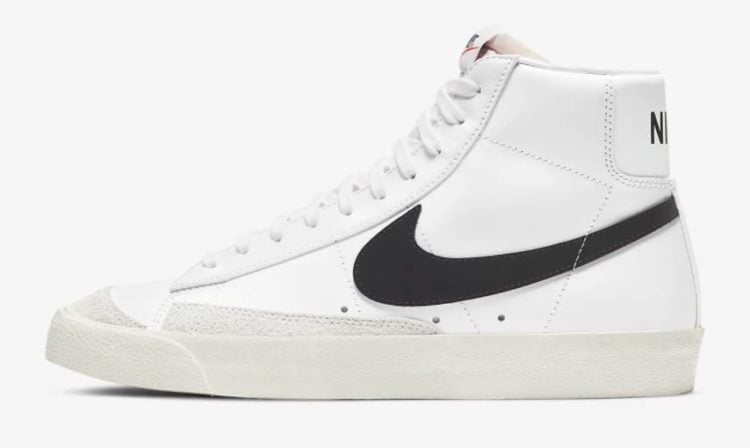 The Nike Blazer is an iconic model in the history of the brand. It belongs to a pioneering class of Nike models that will forever live in the archives. According to Sneaker News, the Blazer was the third model that Nike introduced when it was still a new startup footwear company. It was introduced in 1973 as a basketball shoe. Celebrity athletes endorsed the shoe by wearing them including George Garvin. Nike is planning to bring them back for 2021 and the news has created a stir of excitement. Although originally intended to be worn on the courts, the Blazer adapted to other uses. With the pending release of the new lineup, what are Nike Blazers for anyway? Here’s everything we know about them so far.

The history and evolution of the Nike Blazer

Since the first release of Nike’s basketball sneaker in 1973, fans of the model realized it featured a versatile design and was suitable for multiple uses. Nike adapted the design of the sneaker as a part of casual lifestyle wear collections. The use of more advanced technology also made it suitable for skateboarding. The Blazer has always been a simple shoe with a mid-cut profile that lent itself some fabulous collaborations throughout history. It’s gone on to inspire partnerships with famous streetwear brands including Stussy, Off-white, Supreme, and others.

According to Footwear News, Nike has maintained a fairly constant flow of new renditions along with occasional limited editions of the Blazer which have kept it on the roster of relevant sneakers in both the fashion and the practical worlds. It’s been a hit across multiple markets as a luxury sneaker with its limited-edition Supreme collaborations and promotions for skateboarding editions. The classic sneaker is easily adapted to practically any niche in the footwear realm. It’s been around for nearly 50 years and it’s as relevant today as the date of its first release. It gained recognition as one o the most technical basketball shoes in the industry upon its release with grippy rubber soles for strong support and incredible traction. All Nike enthusiasts are aware of the astronomical advances in performance technology Nike has made in the last 5 decades, so what is the new iteration of the Nike Blazer going to be like?

Recent history of the Blazer

Grailed reminds us of the recent history of the Blazers dating back to 2013, not so long ago. The model was released in the CDG Blazers as low suede sneakers, with a black aesthetic and leather swooshes. In 2014 more colors were released in the Blaze High variant. Two years later the low came out in an all-leather version that was a sophisticated black color. They became popular as an accessory to be worn with streetwear and casual wear. The unbeatable classic design never loses its charm and appeal. It’s become rather clear that the Nike Blazer can be anything Nike wants it to be. The design is simple and it doesn’t take much tweaking to create a technical sneaker that is useful in a variety of applications whether it be skateboarding, basketball, running, casual wear, or others.

The Nike Blazer is making another comeback

Sneaker Bar Detroit revealed that Nike is at it again with one of the largest collections of the Nike Blazer we’ve seen for 2021. Although release dates have not yet been confirmed, it’s going to be an exciting year for Blazer enthusiasts. A new Blazer mid is set to be released in the Sportswear collection as a part of Nike’s Summer Showers collection sometime before the summer months hit. The new mid will be offered in a variety of colorways including Midnight Navy, White, Smoke Grey, and Light Smoke Grey. A unique NSW layered text will be the featured print on the uppers. The reported price will be an affordable $100 per pair. A Nike Low Blazer in an acid wash colorway is also coming soon. This version will feature a canvas upper with leather trim. It’s expected to retail for $85. The Blazer Low will also be offered in a USA Denim colorway sporting white uppers with red and white trim and accents for $85. The Nike Blazer Low Soccer colorway is also slated for release in 2021 featuring a white smooth leather upper with accents of grey suede. The Swoosh features a grass-like green suede material that is also applied to the heels. The selling price will also be $85.

What is the Nike Blazer For?

From what we can tell, a better question would be what isn’t the Blazer for? We just scratched the tip of the iceberg for the number of new iterations of the shoe that are coming down the pike for 2021. So far we see lifestyle sneakers, soccer sneakers, and just about everything else you could imagine. It’s going to be a very good year indeed if you’re a fan of the Nike Blazer. The drops are scheduled to begin in the weeks to come for the 2021 versions of the Blazer. We’re aware of a few of them, and we know that there is a slew that is on tap for release.

The Nike Blazer is coming back again for 2021 with even more exciting variants and colorways. The Blazer has a rich history as the third model made by the brand. What’s so remarkable about this versatile classic is that it’s been around for so long. The Nike Blazer is one of the most versatile sneaker designs that Nike has to its credit. We weren’t able to pin down the exact release dates for the new Blazers so you’ll need to keep your eyes open and your ear to the ground for news of the new releases before they spring. They’re likely to go quick.