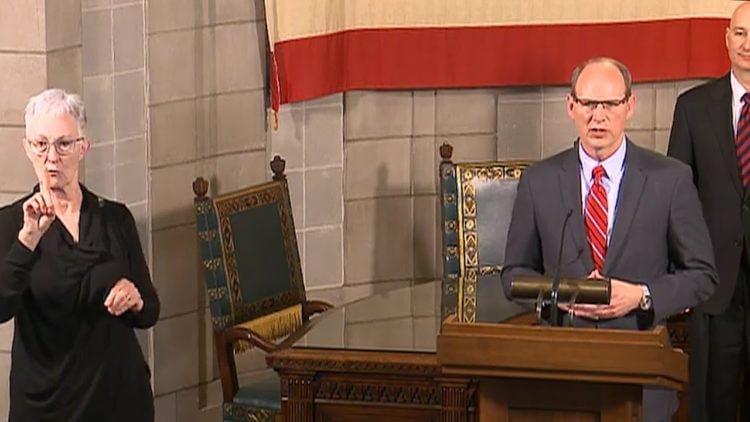 Pete Ricketts is the Republican serving as the 40th Governor of Nebraska. Currently, he is on his second term, which was made possible by him having been re-elected in November of 2018. Like a lot of his counterparts, Ricketts has been brought into the spotlight in recent times because of the COVID-19 crisis.

1. Born and Raised in Nebraska

Ricketts was both born and raised in the state of Nebraska. To be exact, he was born in Nebraska City, which was the first city to be incorporated in the state before it had even become a state. However, Ricketts’s family moved to Omaha in later times, with the result that was where he and his siblings attended high school.

Speaking of which, it should be mentioned that Ricketts’s father Joe Ricketts founded what would become TD Ameritrade. In short, the SEC banned fixed brokerage commissions in 1975, which convinced Joe Ricketts and his partners to start up First Omaha Securities. Over time, the new firm prospered. Something that prompted not one but two name changes to Ameritrade and then TD Ameritrade when it swallowed up TD Waterhouse.

3. Went to the University of Chicago

Following high school, Ricketts went to the University of Chicago, which is a well-known school with scholars that have managed to make themselves famous in a wide range of fields. For proof, look no further than the various Chicago schools. One excellent example would be the Chicago school of economics that favors new classical macroeconomics. However, other excellent examples range from the Chicago school of sociology that pioneered urban sociology to the Chicago school of literary criticism that came into existence in response to New Criticism but is sometimes considered to be a part of New Criticism. In any case, Ricketts studied biology at the undergraduate level before following that up with a combination of marketing and finance at the graduate level.

4. Worked For His Father’s Business

Upon graduation in 1991, Ricketts worked a while for Union Pacific Railroad before working another while as a salesman for an environmental consultant based out of Chicago. By 1993, he was at his father’s business where he spent a few months in the call center before being promoted to a series of executive positions. Eventually, Ricketts was made the COO to his father’s CEO, which is notable in that the COO is often used as the CEO’s second-in-command.

5. Made a Failed Run For the U.S. Senate

In 2006, Ricketts left Ameritrade for the purpose of running for the U.S. Senate. However, he was beaten by the incumbent Ben Nelson, a Democrat who held the position from 2001 to 2013. Afterwards, Ricketts returned to Ameritrade’s Board of Directors where he remained until the entire Ricketts family relinquished their seats in 2016.

6. Co-Owner of the Chicago Cubs

The Ricketts family bought the Chicago Cubs in 2009. As a result, Ricketts is one of the baseball team’s co-owners. Moreover, he and his brother Tom Ricketts can be considered to have fulfilled their promise of a World Series win for the Chicago Cubs because of the 2016 World Series. The win is particularly notable because it broke not one but two record-breaking droughts, with one being a 71-year National League pennant drought and the other being a 108-year World Series championship drought. As such, it is considered to be the end of the Curse of the Billy Goat.

8. Is a Social Conservative

Generally speaking, Ricketts can be considered a social conservative. For example, he is an opponent of same sex marriage. Likewise, he is an opponent of a woman being able to choose to abort. Presumably, Ricketts’s social conservatism is connected to his Roman Catholic faith to some extent. It is interesting to note that he is both a Knight of Columbus and a Knight of the Holy Sepulchre. The first indicates membership in a Catholic fraternal service organization, which is known to promote conservative Catholic views when it comes to public policies. Meanwhile, the second indicates membership in a still existent Catholic order of knighthood that is focused on fidelity to the Pope as well as supporting Christians in the Holy Land.

Ricketts is a strong supporter of the death penalty. This can be seen in how he used his own money to fund a referendum to restore capital punishment in the state of Nebraska when lawmakers repealed it in spite of his opposition, which proved to be successful. It should be mentioned that Ricketts’s position on the matter runs contrary to that of Pope Francis’s stance that executions are always unacceptable, which is particularly notable because he has commented on the role of his faith in his stance.

10. Mentioned in News Because of Meatpacking Plants