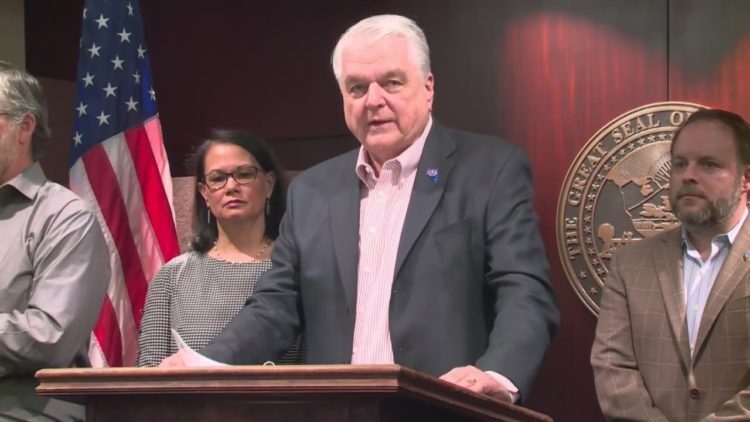 Steve Sisolak is the Governor of Nevada. He has held the position since January of 2019, which is notable because he is the first Democrat in the position since Bob Miller from 1989 to 1999. Like his counterparts throughout the rest of the United States, Sisolak has been brought into the spotlight in recent times because of the COVID-19 crisis.

Sisolak was born in Milwaukee, WI, which is one of the biggest cities in the American Midwest. It is interesting to note that its location made it an excellent choice for a port, which in turn, made it an excellent choice for the wheat farmers in the surrounding region. Due to this, German immigrants turned it into a leading beer producer, so much so that it was able to produce more of the stuff than anywhere else in the world as late as 1981. In more recent times, there has been something of a brewing revival in Milwaukee and the surrounding region because of the craft beer movement.

It would be an overstatement to say that Sisolak’s family was poor. However, they were working class with the result that they sometimes struggled. In any case, Sisolak is of Czech descent, meaning that he can trace his lineage to the West Slavic people who are concentrated in what is now the Czech Republic in Central Europe. It is believed that said people settled in the region during the migration period where they proceeded to absorb both the Celtic and the Germanic populations who had preceded them.

As it turned out, Sisolak put what he had learned about business to good use as an entrepreneur. Generally speaking, he is known for being a partner in a venture called the American Distributing Company, which specialized in cups, pens, and other items that can be used for promotional purposes by commercial clients. However, he was a partner in another company called Associated Industries as well.

5. Elected to the Nevada Board of Regents

Every politician has to start somewhere. In Sisolak, he started out by being elected to a seat on the Nevada Board of Regents in 1998 where he went on to serve for a decade’s time. For those who are curious, the Nevada Board of Regents oversees higher education in the state, meaning that it wields a fair amount of power in that regard. Over the course of his service, Sisolak opposed a tuition increase as well as student fee hikes on two separate occasions.

6. Not Quite a Standard Democrat

Sisolak isn’t what one would consider to be a standard member of the Democratic Party. In fact, he isn’t even a Democrat because of personal conviction but rather because he was raised as a Democrat. Politics-wise, Sisolak is a social liberal and fiscal conservative, meaning that he has political positions that resonate with both of the main political parties in the United States.

7. Had an Antagonistic Relationship with Firefighters

When Sisolak was still on the Clark County Commission, he had a very antagonistic relationship with the county firefighters, so much so that he has supposedly received email telling him not to expect their assistance should his house ever catch fire. The root of this antagonism can be traced to Sisolak’s opposition to the county firefighters’ earnings at a time when the county was facing an estimated $200 million shortfall. In particular, he was opposed to a proposal providing them with bonus pay for transporting patients to the hospital as well as their cost-of-living raises that outpaced inflation rates by 32 percent over a 20 year period. The fact that Sisolak was one of the few voices speaking out against the county firefighters meant that he became an obvious target for their ire.

8. Believes in Giving Back

Sisolak takes charity very seriously. For him, this is rooted in his sense of empathy for people who are impoverished, which comes from his own experiences in this regard. As mentioned earlier, his family was never well-off, as shown by how he wore hand-me-downs from his older sibling when he was a child. However, there was a time when his father got laid off for three years, which put particular strain on his family’s finances throughout that entire period. Due to this, Sisolak believes in helping out others because he has been in a similar position.

Religion-wise, Sisolak is a devout Catholic. To an extent, this is because he enjoys having some quiet time in which to reflect on matters. However, he was also inspired by a near-death experience after letting his faith lapse for a time. In short, what happened was that he was on the operating table for something related to his appendix when a snowstorm knocked out power in the region, with the result that he came very close to dying then and there. Sisolak took his survival as a sign from the divine, thus causing him to renew his faith.

10. Has Faced Opposition to His COVID-19 Measures

Like a lot of his counterparts, Sisolak has faced opposition to his COVID-19 measures. However, at least some of his opposition doesn’t seem to be either very popular or very competent. In short, a group seeking to recall Sisolak failed to get more time in which to collect enough signatures because their argument that the governor’s stay-at-home order had made it much more difficult for them to gather signatures fell upon unsympathetic ears, which is unsurprising when one learns that they had managed to get just 15,892 of the 243,995 signatures needed. Besides that, the judge also noted that the group could just go ahead with a new recall petition if they were truly determined to continue forward, particularly since they already had the contact details of 15,892 people willing to sign such a petition.