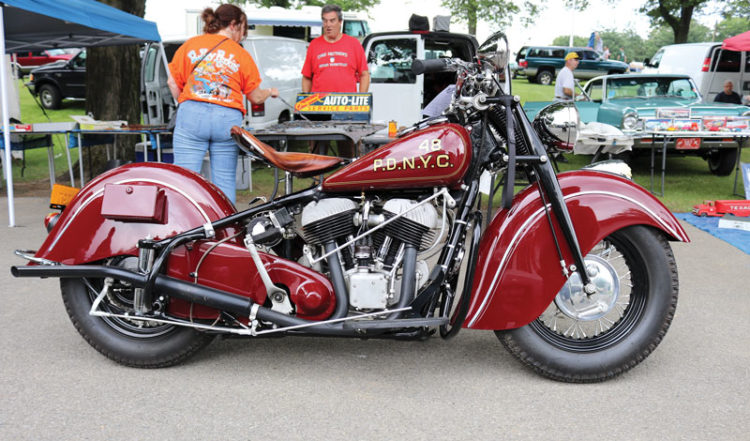 As motorcyclemuseum.org writes, the origins of the Antique Motorcycle Club of America date back almost a hundred years. In the 1920s, a young man named Emmett Moore was flicking through American Motorcyclist & Bicyclist magazine when he saw something that stopped him in his tracks – an advertisement for a single-cylinder 1928 Indian Prince. Instantly, he knew he wouldn’t be satisfied until he owned one. At the time, Moore, like most young men of the time, was using a bicycle to get around. But now, he knew there was something bigger, better, and altogether faster available. Determined to make his dream a reality, he started saving. By the spring of 1930, he was ready. Armed with enough money for a down payment, he started to do the rounds at his local Cincinnati Indian, Excelsior, and Harley-Davidson motorcycle dealers. It was at the Harley Davidson shop where he found his 1928 Indian Prince. At $85, it was by no means cheap, but after getting the dealer to agree to an installment plan, it was his. There was only one problem – Moore had never even sat on a motorbike before, let alone ridden one. But fortunately, a mechanic at the shop was happy enough to teach him.

Emmett Moore and the Antique Motorcycle Club of America

Over the next few decades, Moore’s obsession with motorbikes grew. By the 1950s, he’d started to contribute articles to The Motorcycle magazine. His writing proved popular and in 1952, he was offered the chance to cover the 200-mile National Championship motorcycle races in Dodge City, Kansas. At the event, he happened to run into Al West, a similarly obsessed motorcycle enthusiast who also happened to be a sales manager for Indian. West was already aware of Moore through his work with The Motorcycle, and the two quickly started up a conversation about their mutual love. During the conversation, Moore casually mentioned that he’d long harbored a dream of working at the Indian factory. Moore thought nothing more of it until, two weeks later, he received a letter inviting him to the Indian factory in Springfield, Massachusetts, for an interview. He aced the interview and shortly after joined the company’s advertising department.

Two years later, he took his enthusiasm one step further when he founded The Antique Motorcycle Club of America, Inc. (AMCA), alongside fellow enthusiasts, Ted Hodgdon, Henry Wing Sr., and Henry Wing Jr. Each of them donated $4 to get the organization’s first newsletter printed. The newsletter was intended to inspire more people to get involved with their passion for restoring and preserving antique motorcycles. Even launching the Antique Motorcycle Club of America didn’t sate Moore’s appetite for bikes. That same year, he was appointed as advertising manager for BSA in Nutley, N.J. A decade later, he accepted a job as the Dealer Service Manager for Kawasaki and in 1982, he launched a new organization, 101 Association, devoted to his all-time favorite motorcycle, the Indian 101 Scout. Moore died in 1992, but his legacy lives on in the Antique Motorcycle Club of America.

Since its humble beginnings, the Antique Motorcycle Club of America has grown into one of the largest organizations for antique motorcycle enthusiasts in the world. According to Wikipedia, the organization, which is still headquartered in New England, has over 12,000 members spread across 88 chapters in the United States, Australia, Canada, Europe, and Japan. Today, the mission of the Antique Motorcycle Club of America is still exactly the same as Moore, Ted Hodgdon, Henry Wing Sr., and Henry Wing Jr imagined it back in the 1950s, namely the “preservation, restoration and operation of old-time motorcycles.” Members don’t need to own an antique bike themselves (and just to clarify, an ‘antique’ in this context is any bike older than 35 years old) – they just need to have an interest in studying, restoring, preserving, or simply sitting back and admiring them.

The Benefits of AMCA Membership

Membership fees for the Antique Motorcycle Club of America may have increased since the early days, but with yearly membership costing just $40 for yourself and another member of your household (or $55 if you live outside the US), it’s still attractive given how many benefits come with membership. Members of the organization have the opportunity to meet up with other members of their chapter through activities like swap meets, national meetings, bike shows, seminars, and antique bike road runs. At National Meets, members can compete in three separate categories – Restored, Original Condition or Period Modified. To keep the amicable spirit of the event, members don’t have to compete against each other for the awards. Rather, the bikes are assessed against a 100-point scale to compare them to the standard of the same motorcycle at the time of its original release.

National Road Runs give members the chance to take their bikes on the open road through some of the most scenic parts of the country, with the added benefit of some great company. As per the AMCA’s official website, other membership benefits include a bi-monthly magazine, online forums with expert advice, and access to hundreds of old and rare sales brochures, parts list, and repair manuals via the AMCA Virtual Motorcycle Library. As an added perk, AMCA members quality for discounted admission across numerous motorcycle museums.

Ever since the start, the AMCA has been as much about camaraderie as it has about the bikes themselves. The type of people who join is diverse, with each chapter counting everyone from millionaire collectors, actors, lawyers, doctors, shop assistants, teachers, and mechanics among their ranks. Unusually for a motorcycle club, the AMCA is popular with women, who currently make up around 1/4 of its membership. The reasons that people join the AMCA are multiple, but if there was one thing that underpins every member’s enthusiasm for the organization, it’s the friendship they’ve found and the camaraderie they enjoy with like-minded people. That, and their shared enthusiasm and knowledge about rare and antique bikes. Everyone has their favorite, of course, and among the member’s rides, you’ll find everything from super rare Crockers, Flying Merkels, and Bohmerlands to Honda Z-50s, Yamaha DT175s, Kawasaki ZX-9s, Indian Chiefs, Harley-Davidsons, and Honda Goldwings. Basically, if there was a bike built prior to 1984, you’ll find it among the ranks of members who either own one, is restoring one, or who knows more about it than the maker themselves.