Home
Motorcycles
What Motorcycle is Used in the Movie “Ghost Rider?”
Prev Article Next Article 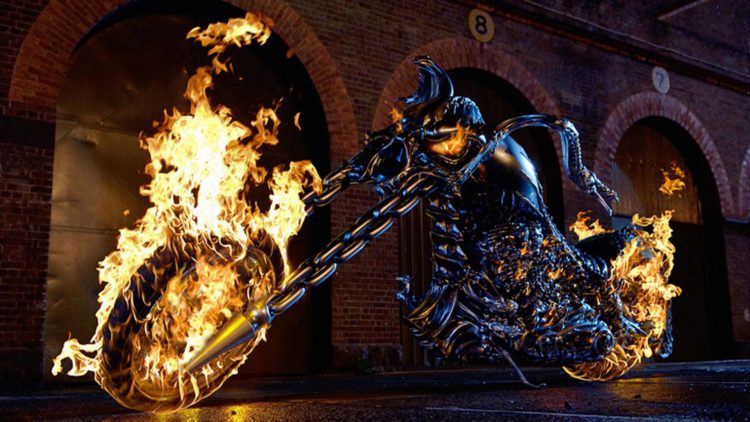 Contrary to popular opinion, there was a real motorcycle built for the 2007 “Ghost Rider” movie starring Nicolas Cage. However, it was 11-feet long and weighed more than 500 pounds! It consisted of a chrome shell that was really fiberglass and had been molded around a chopper from Australia that was custom-made.

Most people who saw the film assumed that the bike was entirely CGI, which is why it’s so interesting that there was a real bike that’s actually somewhat rideable. It was never street legal though and, if the engine was run for too long, it would have melted the fiberglass. Of course, the flames were CGI but the motorcycle does exist. In fact, according to Hollywood Star Cars, the custom built panhead chopper had a Harley-Davidson engine. The name panhead, BTW, comes from the rocker covers’ distinct shape that resembles a pan turned upside-down. It’s a two-cylinder (with two valves per cylinder) pushrod V-twin engine. In 1948, it replaced the Knucklehead engine and was continuously manufactured by Harley until it was replaced by the shovelhead in 1965. An interesting note that only Harley experts know about is that the design of the engines has been evolving throughout the years. The valve covers have always had distinctive shapes, which helped true Harley enthusiasts to know what kind of engine they were looking at simply by the shape of the valve covers.

According to Volo Auto Sales, the “Ghost Rider” Hell Cycle cost $300.000 to build. Here are the specs according to Bad Ass Helmet Store Movie Bikes:

The Storyline of “Ghost Rider”

Johnny Blaze (Nicolas Cage) is a stunt man who becomes a motorcycle-riding bounty hunter for the Devil himself and is called “Ghost Rider”. Johnny’s custom hard-tail chopper turns into the Hell Cycle, which is an organic combination of bone and metal on two wheels with a seriously bad attitude that’s fantasy-driven. It has no rear or front suspension and limited sound suppression, which means it’s incredibly loud. It’s also equipped with front and rear disc brakes that give it sufficient stopping power. The engine and the frame are surrounded by artfully sculpted fiberglass bodywork that is highlighted by some amazing organic textures and shapes that are vertebrae-inspired. The entire bike was painted bright silver and also sported some dark gray accents. The front of the Hell Cycle resembles a demonic skull and the handlebars look like gleaming horns that are protruding from the front. In addition, the front forks are quite long with resin “chain-link” covers. In the rear of the bike, the motif of the protruding bony vertebrae continues to the rear fender. The Hell Cycle also had two independent electrical systems. One of them is for the engine while the second fuels the “interactive fire”, which is actually orange LED lights that were mounted on the outside of both wheels. Later, in post-production, they were replaced with computer-generated-images (CGI) of burning fire.

The “Ghost Rider” (in both the movies and the superhero comics) is a human being who transforms into a skeletal super-human who has supernatural powers and is enveloped in ethereal flames. The motorcycle he’s riding is capable of traveling faster than any ordinary vehicle and also performs feats that are seemingly impossible, like riding across water, up vertical surfaces, and even leaping over great distances. Ghost Rider is virtually indestructible. Knives and even bullets go right through him, causing absolutely no pain. It would seem that he is actually immortal, since it’s said that he was created by God and God is the only one who can destroy him. In spite of the fact that he’s made of bone and hellfire, the Ghost Rider has superhuman strength that is truly formidable. It’s also been said that Johnny Blaze as the Ghost Rider is capable of pressing about 25 tons (50,000 lbs).

A Nod to “Easy Rider”

The Hell Cycle Panhead Chopper build was based upon the “Captain America” chopper ridden by Peter Fonda in “Easy Rider”. In an interesting twist, Fonda plays Mephistopheles (the Devil) in “Ghost Rider” and Johnny Blaze sells his soul to the Devil to save the life of his dying father. Later in life, Johnny becomes a famous stunt rider and battles the Devil at every turn. But then, Mephistopheles offers to release Johnny from his contract if he will help defeat the evil son of the Devil, who is aptly named Blackheart, whose dastardly plan is to end up possessing a thousand souls and turning the planet into Hell-on-Earth.

Where Was the Movie Filmed?

Johnny Blaze defied the Devil in and around a small town in Texas that was nameless in the film. In reality, however, it was filmed in Melbourne, Australia. This just proves once again that nothing is ever as it seems in the movies.

Whatever Happened to Nick Cage?

The 56-year-old actor’s last major studio movie was “Ghost Rider: Spirit of Vengeance” in 2011. In that movie, Cage is Johnny Blaze again but, this time, he’s deeply in debt and attempting to coerce a billionaire into buying a screenplay that he’s been working on. Many fans wonder what happened to Cage since then. The reason that he’s not in any major motion pictures anymore is basically the same as for all actors when they end up falling from grace in Tinseltown. He starred in a string of movies that were just plain bad. He also received a great deal of criticism for his poor performances, causing the powers that be to become unwilling to work with him. And, most importantly, his movies were losing money and lots of it, so his brand just got weak. Still, we’ll never forget his previous great performances like Castor Troy in “FaceOff”, Sailor Ripley in “Wild at Heart” (where he showed off his amazing singing voice), John Milton in “Drive Angry”, and of course, Johnny Blaze in “Ghost Rider” where he rides that amazing flaming bike right into the hearts of audiences everywhere!