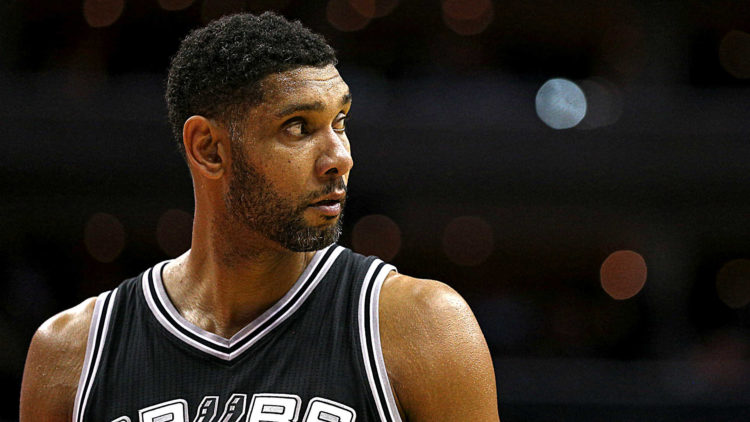 Retired NBA basketball player, Tim Duncan, is one of the greatest players of all time known as the “gentle giant”. During his career with the San Antonio Spurs he won five NBA Championships and was named NBA Rookie of the Year and was named NBA finals Most Valuable Player three times. Throughout his career, Duncan amassed a fortune and is worth $150 million today. The quiet, stoic and focused basketball player wanted to be an Olympic swimmer but turned to basketball in high school. He was sought after by several university basketball scouts because of his height, 6′ 11″. His basketball skills quickly became as important as his height. During his professional basketball career and in his retirement, Duncan is known for his philanthropy. Here’s how professional basketball player Tim Duncan Achieved a net worth of $150 million.

Tim Duncan was born on April 25, 1976 on Saint Croix in the US Virgin Islands. His parents are William and Ione. Ione died from breast cancer when Tim was just 14 years old. Tim has an older brother Scott who is a film director. His older sisters are Cheryl and Tricia. Tim was inspired by his sister Tricia who competed as a swimmer for the US Olympic team. He trained for the Olympics at Saint Croix’s Olympic sized pool hoping to make it on the 1992 US team. Unfortunately, Hurricane Hugo destroyed the pool, leaving the only option for training in the ocean.

Devastated by his mother’s death and the end of his swimming career hopes, Tim’s brother-in-law, who played college basketball, encouraged the tall Tim to try basketball to help him deal with his grief. Tim began playing basketball as a Freshman at St. Dunstan’s Episcopal Church. Although awkward at first, Tim continued to practice and became a star player on the team. He was scouted by several Universities and opted to attend and play for Wake Forest University when he graduated from high school.

As a member of the Wake Forest University Demon Deacons basketball team, Tim Duncan was a skilled, stoic and focused basketball team member. Aside from basketball, Tim focused on his studies. He majored in psychology and studied anthropology and Chinese Literature. He even co-authored a chapter in a social psychology book. While a member of the Demon Deacons, Tim Duncan helped his team reach the NCAA Tournament every year. He won the most games of any player through his college career. He won ACC Player of the Year twice and All-American three times. His team performed in the 1994 Goodwill games. Tim Duncan was a top prospect for the 1995 NBA Draft. He refused to quit college however. On her deathbed, Tim promised his mother that he would go to and finish college. She taught him and his siblings the value of education, and despite the prospects of an NBA career, Tim decided to finish college first.

In 1997 Tim Duncan was the first pick in the NBA draft. He became a member of the San Antonio Spurs. Known as “21”, Duncan chose his Jersey number for his brother-in-law’s college number and for his idol, LA Lakers’ Magic Johnson. In his rookie year, he started all regular season games and won the NBA Rookie of the Year Award. He also won the NBA All-Defensive Second Team Award and helped lead the Spurs to the 1998 NBA Playoffs. During his 19 years with the Spurs, Duncan was one of their most consistent players averaging 23 points per game. Duncan served as a Power Forward and as a Center. He was also part of “The Big Three” along with teammates Tony Parker and Manu Ginóbili. In 2007 Duncan was chosen Captain of his team. He continued his successful career with the Spurs making between $5 million and $20 million a year. During his professional career, Duncan played on the US National Team in 1998 and helped the team win the World Basketball Championship and played on the US Summer Olympic team in 2004. In the summer of 2016, Duncan opted out of a $5.5 million contract with the Spurs and announced his retirement from the NBA. In December 2016, his #21 Jersey was retired in a postgame ceremony. He is the eighth San Antonio Spur player to have his jersey retired.

Aside from the millions that Tim Duncan made from his professional NBA careerTim Duncan earns an average of $2 million a year with endorsement deals and other endeavors. Duncan opened an auto customized shop in San Antonio in 2013 called Black Jack Speed Shop. In 2017, Black Jack Speed Shop teamed with The Tim Duncan Foundation to get supplies to the victims of Hurricane Harvey. In addition, Duncan has many endorsement deals including his biggest with Adidas.

Tim Duncan has won many awards and honors throughout his basketball career. In college, he was awarded the prestigious John Wooden Player of the Year Award. He has been named TNT’s “Next 10 Great Players”, the Association for Professional Basketball Research’s “100 Greatest Basketball Players of the 20th Century” and Sport’s Illustrated’s “NBA Player of the Decade in 2009. Duncan’s native Virgin Islands awarded him the Medal of Honor and hold regular “Tim Duncan Days” ceremonies. In 2017, Tim Duncan was inducted into the College Basketball Hall of Fame.

The ever humble Tim Duncan has given back to several philanthropic organizations. In 2001 he established the Tim Duncan Foundation. The foundation raises money for education, youth sports and health awareness. It is headquartered in San Antonio, Texas, Winston-Salam, North Carolina and the US Virgin Islands. Tim also raises money for research of prostate cancer and Cancer Therapy and Research Center, Children’s Center of San Antonio and Children’s Bereavement Center.

Tim Duncan has three children. He married Amy Sherril in 2001 and they have two children together, Sydney and Draven. They divorced in 2013. In 2017 Tim and his longtime girlfriend, Vanessa Macia had a daughter, Quill. They live in San Antonio. Before he retired, Tim Duncan sued his former investment broker claiming $20 million in losses. The broker pleads guilty and Tim reached a settlement of $7.5 million last year. Since retiring from the NBA in 2016, Tim has enjoyed his philanthropic works and his family. He also shows up at the Spurs’ practices. He’s enjoying golf, fishing and hunting. He also enjoys playing video games and attending Renaissance Fairs.