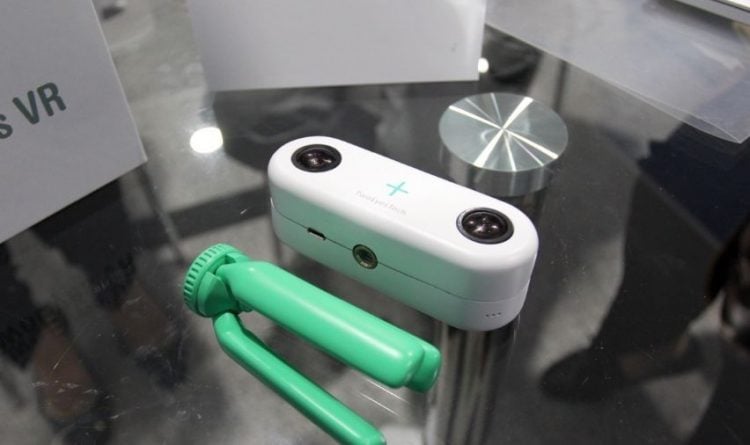 Imagine being able to immerse your family and friends in your own personal experiences or being able to relive vacations and special events. The newly developed TwoEyes VR 360 Camera allows for this to happen. If a parent, grandmother or grandfather misses a child’s game, play, or recital, now you are able to share these experiences in an immersed setting. TwoEyes takes viewing beyond looking at photos or viewing a regular video. This camera provides a “being there” experience. The idea of this camera produces quite a buzz. The product is featured at various high tech fairs and exhibitions in different countries.The funding for TwoEyes comes from a Kickstarter campaign. The campaign, which began at the beginning of January in 2016, is fully funded within two days with worldwide support. It is scheduled for mass production in July, 2017. By August, 2017, TwoEyes is expected to be ready for distribution and purchase.

The Team and Product Development

In a short amount of time, a small team from Arc Interactive in South Korea plans to have to TwoEyes ready for an introduction to the world. HunJoo Song is the founder and CEO of TwoEyes Tech, Inc. Actually, he is quickly becoming the face of TwoEyes. HunJoo is a 2011 graduate of Hongik University Graduate School of Industrial Art with a degree in Space Design. His studies at the Hongik University from 1995-2011 provide a background in Metal Art and Design. He is skilled in project management and new business design. HunJoo is particularly interested in technology, arts and culture. TwoEyes is his first business venture. It is easy to see how his studies are incorporated into his work. They appear to blend seamlessly.

Along with SeonAh Kim, who serves as the CMO, and Vivek Soni, the CTO, this team uses their technical knowledge and expertise of hardware and software to develop the world’s first binocular camera that is able to mimic the eyesight of humans.

During a period of 20 months, this small team at Arc Interactive (a South Korean company) makes accomplishments that may take other companies years to accomplish. During the first quarter of 2016, the team plans to focus on research and development. Also, they apply for a patent for TwoEyes. By the fourth quarter, there is a working prototype and a registered patent. January of 2017 is devoted to testing and debugging. The final product is scheduled for completion by June of 2017. Once the final product is ready, then mass production begins. From January, 2016 to August of 2017, this team plans to successfully design, develop and market TwoEyes.

How TwoEyes Differs from Other 3D Cameras

There are two main differences between TwoEyes and other 3D cameras. TwoEyes is the world’s first stereoscopic 4K, 360° camera. This technology is based on how human eyes view objects from two different lines of sight. This allows for the overlapping of visual fields. A stereoscopic camera has several advantages:

Another difference between TwoEyes is that you are able to capture your viewing and recording in the same manner as your eyes function. The human eye enables you to recognize 3D views. The human eyes are separated by approximately 65 mm, which is called a parallax. Your eyes naturally account for this distance when focusing on an object. This parallax has never been replicated until now.

These properties enhance the realism of your viewing experiences. The camera functions like the human eye. This technology separates TwoEyes from other 3D cameras.

TwoEyes VR is the First Binocular 360° VR 4K Camera. It is capable of shooting 3D, 360° or Virtual Reality content. You are able to share your recordings on 360 social media platforms, such as Facebook360. Also, it is capable of live broadcasting. VR binoculars and 3D televisions are other avenues for viewing and sharing your recordings. You are able to control TwoEyes VR using two different methods. It is capable of manual control by using the easy to use two-button shooting controls. This camera operates by using the familiar point and shoot operation. TwoEyes can be controlled remotely by the companion application on your Smartphone.

You are able to edit your recordings in different modes. You can use VR, 360° or 3D for editing. You have a choice of viewing experiences. The most affordable option is to use a cardboard VR headset to view VR content from your Smartphone. TwoEyes is compatible with 3D glasses. You can even display your videos and images on a 3D television. For the most immersive experience, you can use a Head Mounted Display. It takes an excellent camera to produce high quality videos and photos. TwoEyes features a top of the line 4K camera with a resolution of 3840 x 3840. TwoEyes VR comes in two colors (white or black).

The attachable tripod allows for two different shooting styles. Since the tripod is short, you can use it as a handle while shooting. Also, you can fold out the tripod for stationary filming. A gyro sensor allows for horizontal or vertical shooting. A lithium ion battery provides power for over an hour of continuous filming. The product has a built-in microphone. The first model of TwoEyes is water resistant. This means that splashes of water should not damage the camera. THesse features help to enhance your shooting and viewing of videos and photos.

Basically, it looks and feels like any other camera.

TwoEyes VR appears to be similar to a “regular” point and shoot camera, but it is capable of so much more. The functions and results are quite remarkable. It operates with ease. You only need to press a photo or record button. Its simplicity makes it appealing amateur users. This is one camara with advanced functions that allow amateurs to record and produce photos and videos that rival the work of professionals.