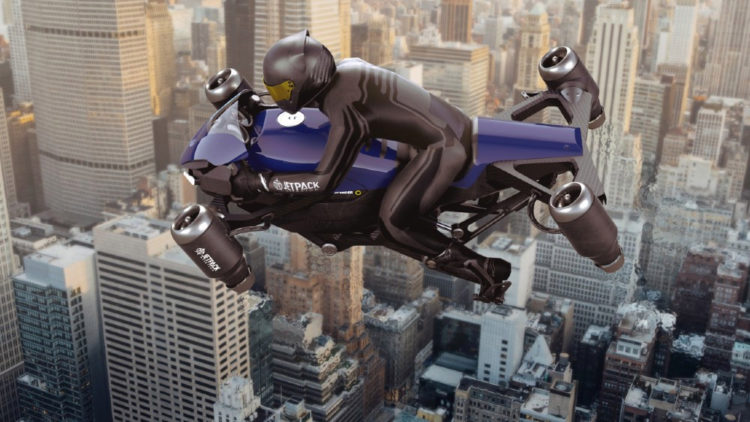 Anybody who grew up during the 1970s and 80s grew up with the idea that flying cars were going to become an everyday thing. In fact, people constantly said that such things were right around the corner. The prediction was that by the year 2000, virtually everybody would have a flying car and the highways would largely be abandoned. Obviously, that prediction is far from coming true but thanks to a company called Jetpack Aviation, it is a little bit closer to becoming a reality.

A Motorcycle That Flies?

The reason it’s closer to becoming a reality is because of their flying motorcycle, more commonly known as the Speeder. Anyone who is a die-hard Star Wars fan will immediately connect the name of Jetpack Aviation’s brain-child with the name of the futuristic bikes that hovered just above the ground which were so prominently part of the story in The Empire Strikes Back. How is it possible that a motorcycle can fly? It all comes down to the dedication and hard work of those at Jetpack Aviation. Creating something that would be viable involved writing their own software programs and doing extremely thorough testing.

They then moved to the prototype stage in order to prove that it really is possible to fly a motorcycle without putting oneself in extreme danger. As it turns out, the software program they designed works exceptionally well. The flying motorcycle performs in almost exactly the same manner as any other motorcycle operating on land would perform. Everything is handled through the software program. In fact, aside from takeoff and landing, flight is autonomous. For those who are worried about rough takeoffs and landings, it’s all made very easy because of the software used on the Speeder. In reality, this particular bike can theoretically be parked on the side of the road in the same parking space that any other motorcycle would take up. It can also effectively take off and land in that same space.

If Jetpack Aviation has successfully developed the Speeder, when will it become available to the public? At the current time, the company plans to have these bikes ready for the public to use within two years. That means that the bike would start becoming available sometime in 2023. Perhaps the more interesting thing here is that the state of California is already planning for a large number of these bikes to be used, updating the infrastructure it currently uses for light aircraft in order to get a jump on the types of aerial highway systems that will have to be put in place in order for this product to be widely successful. Jetpack Aviation is certainly doing its part. In addition to the Speeder, they also plan on producing other models once this one has been released, not the least of which includes an ultra-light version and models that are used for both the military and public transport.

The Importance of an Ultra-Light Model

If the company is making the Speeder available in two years, why are they also developing an ultra-light version that will likely be made available to the public on the heels of its debut? It all comes down to the rules and regulations that have been set forth by the Federal Aviation Administration, rules that haven’t changed a great deal in decades. As a matter of fact, it will be the FAA that is regulating the Speeder and other vehicles like it. Technically, they will be considered aircraft. Until the rules are changed, it isn’t possible for someone to operate an aircraft that can travel at a speed of greater than 60 miles per hour. As luck would have it, the Speeder comes by its name naturally. It can travel at speeds upward of 200 miles per hour, landing it squarely in the category of a bona fide aircraft.

That means that the FAA will require a private pilot’s license in order to operate it. Those who want to operate a similar vehicle without a pilot’s license will have to wait for the ultra-light version, which will be limited to the aforementioned 60 miles per hour. In addition, that particular version will only be allowed to fly for 15 minutes at a time. That’s great if you only have a short distance to travel, but it clearly won’t work well for anyone who is going an appreciable distance. Those individuals will have to consider getting qualified to operate the Speeder or even one of the company’s other vehicles that will likely be coming in the next few years.

There is no doubt that things are changing with regard to having access to these types of vehicles. As such, things will also change when it comes to getting qualified to operate them. It is conceivable that people will eventually get qualified to operate these types of vehicles in much the same way that people have driver’s licenses today. However, there is a lot of work to be accomplished before any of this can happen. For starters, the Federal Aviation Administration will have to revamp the way that it regulates it’s license holders, making it more accessible to the general public. It will also have to become more cost-effective. These are two things that have been holding many similar companies back for years. That is precisely why the company is working directly with the state of California to make the necessary changes in order to provide greater access to this type of transportation. The changes have to start somewhere, and it only makes sense that they would ultimately start with one of the more progressive states in the nation when it comes to thinking outside the box.

Will this type of transportation eventually become an everyday thing? At the moment, it’s impossible to say yes with any level of certainty. However, Jetpack Aviation is closer to achieving that goal than any other company has ever been in the past. They have a plan to sort through all of the bureaucratic red tape that is associated with changing the way that people get from one place to another on a daily basis. They have an effective vehicle that could realistically serve a large portion of the general public. They have done their part when it comes to laying the groundwork. Now the only thing that is required is to wait and see how well the public receives it as a whole.