Aston Martin has been associated with high-end, luxury automobiles, built for excellence. They are globally known and have a long heritage of high performance cars that extends through an entire century as one of the most successful auto builders in the world. For over a century, Aston Martin has played a role in the world of auto making, building cutting-edge motor racing vehicles and luxury automobiles that are sought after by some of the most wealthy individuals and car collectors, world-wide. Aston Martin knows how to combine performance with elegance to create the most beautiful, high tech automobiles of all time, on the road. Now, Aston Martin is taking its knowledge and skill of automobiles to the water.

The AM37 will be produced in two versions. The AM37 standard will have a top speed of 50 knots while the AM37-S will have a top speed of 60 knots. It has been described as an engineering beauty. The sleek design to this motorboat is unlike any other with the unique look of a race car; eye-catching and an attention getter, this boat has the look, feel and performance of every other Aston Martin design and production.

The AM37 is a 37 foot powerboat that was designed using Aston Martin’s “Heart over Mind” approach to their creative design process. This was the driving force behind every aspect of this build, from bow to stern. As a matter-of-fact, just to look at the AM37, you would easily agree that the rear of the yacht resembles that of Aston Martin cars, with its uniquely designed sculpture-like look. 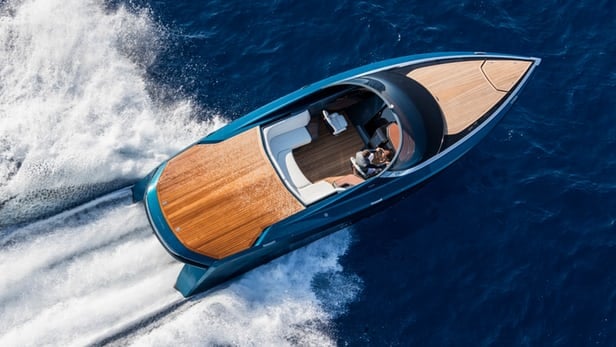 Aston Martin used the design of Mulder naval architects to create a carbon composite structure. They wanted to ensure the powerboat was as solid as it was as comfortable as it performed, the same as their automobiles. Like Aston Martin’s automobiles, all of the seating in the rear of the AM37 are crafted from only the finest leathers and the seating is elegantly laid out on deck to give those aboard, the best views and most comfortable positioning possible.

The windscreen was uniquely designed with a double curvature that is a new standard for Aston Martin and it was sculpted from just one piece of glass. Seamless, this windscreen gives the captain full view of everything around him with unobstructed views. It also gives this powerboat’s front view a sleek and arched look while gliding across the water. You’ll find fine polished metals for all of the cockpit controls; such as all of the throttles, steering wheel and joysticks.

Aston Martin used only the most advanced multimedia functions when it came to the boat’s navigation system, control monitor and the entertainment systems. You will have everything you need to navigate yourself safely through the waters with the top-of-the-line technological functions as well as the best entertainment for a fully relaxed and comfortable powerboat experience.

If you need to cover the cockpit; you can quickly have yourself out of the elements with just the touch of a button. No more fumbling with canvass covers and poles. Technology allows you to have everything you need at your finger tips when it comes to controls of this powerboat and Aston Martin made sure you were equipped with the latest an best that technology offers. However, an electric-hydraulic carbon fiber bimini top is stored under the engine hatch when you do not want it up.

This day cruiser was designed for overnight stay as well. It has the ability to be turned into an overnight berth simply by turning the table into a bed. The cabin on this boat has an abundance of mood lighting for ambience as well as to brighten the cabin for plenty of sight. It is also equipped with air conditioning to keep you and your guests cool and comfortable during those hot days and nights when you need to retreat out of the heat.

Other amenities you’ll find down below in the cabin include a refrigerator, microwave, an oven and coffee maker. There is a lavatory on board so that you can continue cruising without worrying about making stops at marinas along the way. For off-the-boat water time, a swim platform has been added to the rear of the boat to give you and your guests easy access to get into the water an back on the boat. 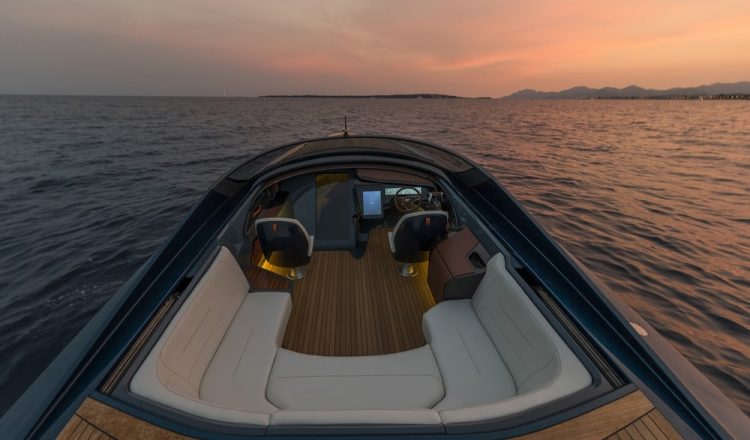 It’s hard to say that Aston Martin has outdone themselves again, when it comes to the AM37 powerboat being that this is their first in-line powerboat. However, when you hear the name Aston Martin, you can assure yourself that they have gone all-out to make this a must-have for anyone with superb taste for high-end boats.

For all of those waiting to see the Aston Martin AM37 in person, it will be unveiled at the Monaco Yacht Show this year. Sea lovers and boat enthusiasts don’t have to wait too long before they are able to get their eye on the first of Aston Martin’s line of boats, which as the name has always proven, it will be spectacular.

Robert Bamford and Lionel Martin are the founders of Aston Martin. In 1913 the two developed the auto making company under the name, Bamford and Martin, Ltd., but the name Aston Martin did not come about until 1914 when Lionel Martin successfully ran the Aston Hill Climb in Buckinghamshire, England then the name changed to Aston Martin and within the first year, the first automobile under the new name, had been built. After 6 years, in 1920, the company moved to Kensington.

The new company didn’t start off with a blast. Instead, it dealt with financial issues and devastation for a decade to the point where the company was forced to close. It wasn’t until a group of investors stepped in and rescued the company and named it, Aston Martin Motors, Ltd., that it finally began to make its comeback and began to develop into the iconic automobile company it is today. And because of its high success in auto design and manufacturing, why not boats? Aston Martin has unveiled its powerboat, the AM37 and it is everything you would imagine it would be with a name like Aston Martin attached to it.