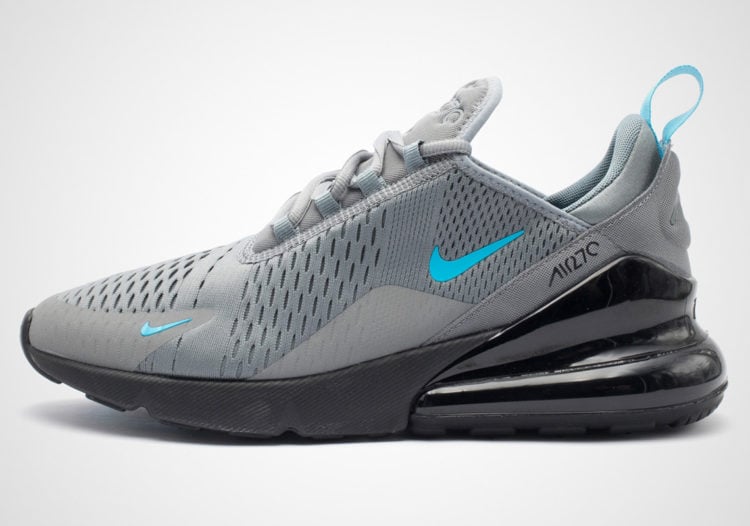 When it comes to sneakers, Nike Air Max shoes are royalty. They’re the GOAT, the running shoe to beat all other running shoes. At the very least, Air Max are the most well-known sneakers on the planet and you don’t get that way by accident. So, how is this sneaker line from 1987 still dominating the game today? It’s a question that can be answered with one word – innovation. Over three decades, Nike has nipped, tucked and tweaked its Air Max line to perfection. The brand has rarely stood still, choosing instead to release a bigger, better version every few years. And fans love it. Whether they’re going gaga for Zoom Air, Shox, Free or Lunarlon sneaker technologies, they know Air Max stands for genre defining quality.

The Rainbow Palette of Air Max 270

The new Air Max 270 is no exception. In winter 2018, Nike released its latest incarnation in yet another shade: a crisp combination of Blue Fury and Cool Grey. It joins a long list of color options, including Wolf Grey/Volt, Camo, Laser Fuchsia, Bowfin, Obsidian and Team Orange to name a few. While many of the releases feature shocks of bright color – Laser Fuchsia shoes are yellow and pink at the back – the merging of Blue Fury and Cool Grey is surprisingly subtle, soft and sophisticated. The two colors have been part of Nike’s arsenal for decades and, together, they create an iconic looking sneaker. It’s an iteration of the 270 with the potential to delight casual fans as easily as Air Max obsessives. The outside of the shoe is dressed in Cool Grey, but there’s a slightly darker shade of grey around the sole and in its interior. Use of Blue Fury is minimal because, as the name suggests, it’s a powerful color.

We’re glad Nike has decided to use the shade sparingly in this case to create an almost uncharacteristically muted sneaker. It’s far from dull though. With splashes of Blue Fury on the logo checks, heel tags and underside of the shoe, it’s got enough color to be elegantly eye catching. It’s a great color combination for anybody who likes to wear their running shoes and not the other way around. 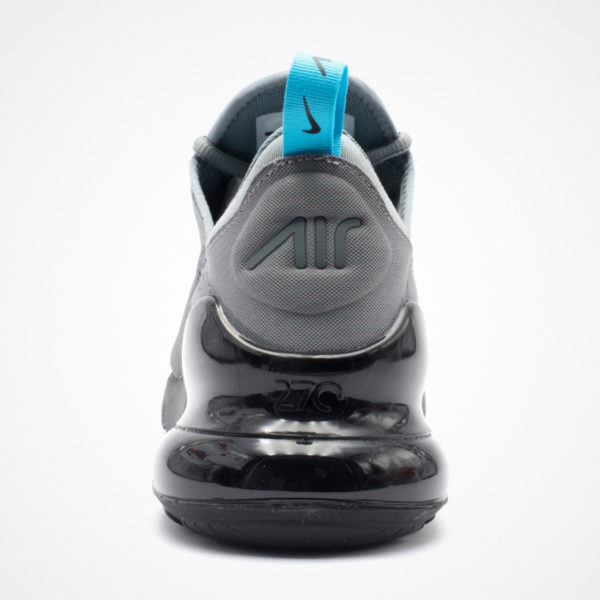 Why the 270 Is Worth Your Money

The Cool Grey and Blue Fury is just one of many color versions of the Air Max 270. Whatever shade you fancy, it’s the quality of the line that makes all the difference. First released in February 2018, the 270 is a striking new model that takes advantage of the current nineties renaissance. In fact, diehard sneakerheads may notice hints of earlier releases like the Air Max 93 and 180, both wildly popular in their day. The 270 carries some major distinctions, however. For one thing, it is Nike’s first fully fledged lifestyle sneaker. For the first time, the brand has made performance – specifically athletic performance – a second priority. It might not sound like a big deal (Nike shoes have never been limited to the running track), but it’s taken a long time for Nike to acknowledge its ‘anywhere’ appeal.

In some ways, it is part of what makes Air Max shoes so cool; that sense of aloofness and determination to just…be. Is it a running shoe? Is it a status symbol for serious collectors? Does it matter, if it looks and feels fantastic? It should come as no surprise to find Nike has invested a great deal of time and money in the technical aspects of its new shoe. Key details of the 270 include a breathable knit upper, asymmetrical lacing and a dual density sole.

According to Nike, it boasts the highest and most cushioned heel incline of any Air Max shoe ever manufactured. Just ask megastar rapper Drake, who’s been pictured wearing his 270’s on a number of occasions. If it’s slick enough for the Champagne Papi, it’s definitely cool enough for the rest of us. Check out the God’s Plan music video to see Drake’s 270’s make an appearance in various colors, one of which hadn’t been officially released at the time.

All that’s left to say is, take a closer look at the Air Max Cool Grey and Blue Fury sneakers if you want a shoe with serious presence.