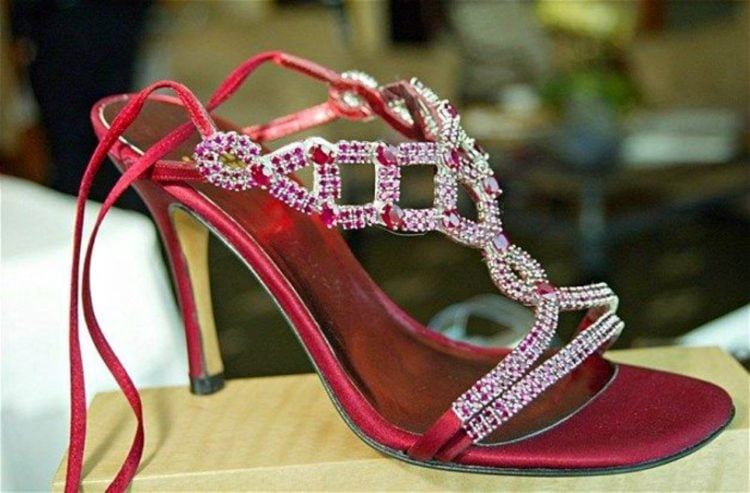 Stuart Weitzman created a pair of stiletto heels that went for an astounding $1.6 million at Harrods of London. The sale took place in 2003. After a glimpse of these magnificent shoes, it’s obvious that they’re of high quality and the design is unique. They have the look of ultra-expensive shoes, but what could possibly increase the value of these highly collectible stilettos to the level of a small fortune? To really grasp the rationale for spending this amount of money on a pair of shoes, one needs to understand the designer, public confidence in his creations and the elements that make this such a special edition in luxury collectible footwear. We take a closer look at the $1.6 million shoes to reveal the factors which combine to create extreme value for collectors and rare luxury shoe enthusiasts.

How Weitzman works his magic

Stuart Weitzman has made a habit of delivering some of the most expensive shoes in the world to the forefront of the fashion scene. His creations are one of a kind and each maintains a profile that contributes to their overall value. It’s a discernable pattern or heuristic of his to come up with an idea or concept for a new design, that is based upon a theme, such as the Wizard of Oz Ruby Stilettos, but he puts his own spin on the shoes and he doesn’t fail when it comes to producing a hit so big that everyone wants the opportunity to at least wear them once. His choices of styling are symbolic. The materials procured for each project are rare and he doesn’t spare expense. Understanding the designer is requisite for realizing the true value of his creations.

The inspiration for the Wizard of Oz Ruby Stilettos

Weitzman developed his concept for this shoe with inspiration from Dorothy’s ruby slippers which have become the “most famous shoes ever made“. Those who are familiar with his work know that all he needs is an element to design an entirely new creation which is related to the original concept, but not even close to being a carbon copy, but rather, totally original. The stilettos are valued at just under a million dollars more than the original slippers worn by Judy Garland, and they offer a modernized take in a delicate and feminine strap style heel, suitable for any formal occasion.

The elements of the Ruby Stilettos

The 1.6 million dollar version is one of a kind, made in a women’s size four. The insole is a cherry red and the straps are made of delicate red satin material and the stiletto heels are four and a half inches in height. An infusion of the rare precious metal platinum is used for the jewel settings and the total weight of this material comes to a half of a pound or the equivalent of 123.33 carats of platinum. Premium platinum thread was used for sewing the upper to the base of the shoes and the straps are encrusted with rare Burma rubies. There are a total of 642 rubies used in the design in oval and round shapes totaling over 120 carats. The stones can also be taken off the shoes and used for jewelry.

The immediate focal point is the strap upper adorning the center of the shoe. The delicate pattern created with the rounds and ovals of the rubies is breathtaking. What is perhaps just as spectacular, is the way that the platinum used for the settings creates a lovely contrast that really sets off the red gemstones.

History of these shoes

The $1.6 million shoes were completed in 2003 and they were on the slate for being revealed to the world at the Oscars in 2003, but there was a delay in their red carpet run. Due to the mood of the country during the War with Iraq, the shoes were held back as a sign of respect and this was Stuart Weitzman’s decision. They were originally made just for this event, so we tip our hats to Mr. Weizman for his tremendous display of respect and honor. The shoes were placed in a bulletproof case for display at Harrods in the Knightsbridge store awaiting their buyer, with the agreement that 100,000 in British pounds would be donated to charities for children in the United Kingdom upon the sale.

These shoes were one of a kind and there has never been another made with the same premium materials. Weitzman, however, did release a special production of a limited number of replicas of this shoe which were offered for a more affordable price of just $390 per pair. The more affordable version makes it possible for more people to enjoy the creative genius of Stuart Weitzman.

The $1.6 million Wizard of Oz Ruby Stilettos is perhaps one of Weitzman’s finest creations. They’re exquisite in their design with a concept that arises from the mind of a creative genius in the designer shoe industry. They represent yet another success for Stuart Weitzman, who continues to roll out some of the most valuable shoes that the world has seen. His impeccable and discriminating taste in the selection of premium materials procured from rare stocks and reserves bring new life to the overarching theme, as we see in the Wizard of Oz Ruby Stilettos which are original, giving a nod to an iconic and legendary pair of shoes which stand as an important part of American film history. He’s even allowed for the release of a more affordable version of this model to share its splendor with people from all walks of life, yet the value and rarity of the original which has inspired them are in no way impugned by the replication.