Home
Lifestyle
Fashion
Did You Know There’s Such Thing as a Louis Vuitton Toilet?
Prev Article Next Article 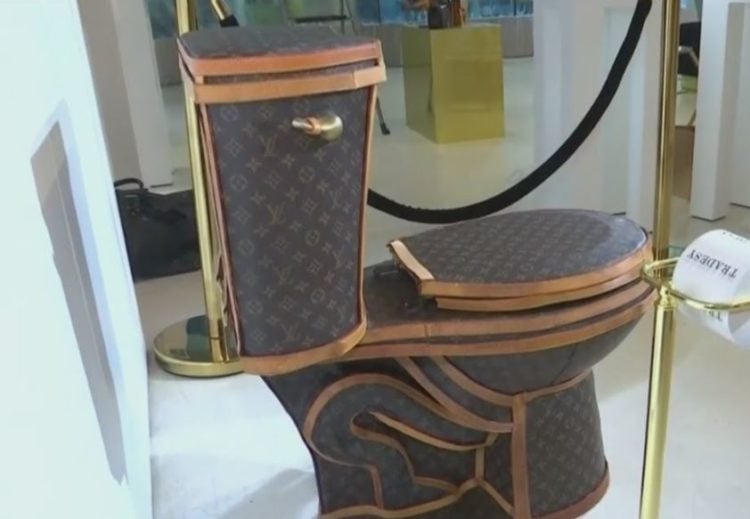 Fashionistas who fall in love with a certain brand can’t seem to help their obsession to own everything ever produced by the company. To satisfy this intense longing to take Louis Vuitton into the bathroom artist Illma Gore acquired a couple dozen authentic Louis Vuitton bags and one suitcase to create an artistic toilet that stands as a symbol of the designer brand for the bathroom. The toilet was not produced by Louis Vuitton, however, they do take credit for the repurposed bags and one suitcase that were used to create this beautiful and classy bathroom accessory. We swear that there really is a Louis Vuitton toilet and here are the details.

The Louis Vuitton designer toilet is the creation of artist Illma Gore as highlighted by Vogue magazine. To capture the full essence of luxury Gore spent three months of her time designing and completing work on the Louis Vuitton toilet that is dressed in a covering of the signature Louis Vuitton monogram in brown leather material. The materials that she used to create the toilet dressage consisted of 24 genuine Louis Vuitton bags with an estimated value o $15,000. She also used the materials from a Louis Vuitton suitcase valued at $3,000. This places the cost of the customized piece of functional bathroom art at $18,000. Gore dedicated three months to the project and it emerged as one of the most unique designer toilets that money can buy. The asking price of the designer potty is $100,000 and it’s up for sale.

The details of the high-end toilet are fairly spectacular. The lid is covered with the canvas from authentic LV bags. Genuine leather trim from the repurposed bags creates a lovely framing for the toilet lid cover in a rich brown color that works as a lovely contrast against the black and gray monogram print fabric. The tank is also dressed in a Louis Vuitton covering that is tailored to the contours with brown leather trim. Even the lid is covered in the LV material with an artsy stitched framing of the brown cowhide leather trim. It’s really a spectacular sight to behold according to This is Why I’m Broke. The bowl is a metallic gold color that gives it a rich aesthetic. No part of the original toilet is visible. It is completely covered with Louis Vuitton fabrics and materials.

According to Luxury Launches, Illma Gore is the artist who receives the credit for the creation of a nude portrait of Donald Trump. She’s from the Los Angeles, California area and she shared that cutting up the expensive bag to use the material gave her a rush that is comparable to a creative urge. The act was not to destroy a Louis Vuitton bag, although that was the end result. It was for the sake of creating a unique piece of art.

Her work isn’t popular with everyone

The LA Times reported that Illma Gore’s painting of Donald Trump in the nude with a small penis was an act that some found to be offensive. The painting became famous and Gore, the latest internet sensation within a week of releasing the Trump work of art. In 2016, she was assaulted by someone that was allegedly a Trump supporter, but the LAPD was unable to gain any leads in the assault. She estimated that the criminal who assaulted Illma was approximately 25 years old. She wasn’t able to provide any further details about the assailant and it became a dead-end case with the perpetrator still at large.

A week after Illma Gore, the Los Angeles artist who became an Internet sensation after painting an image of a nude Donald Trump was allegedly assaulted by a Trump supporter, there are no leads on who the culprits may have been. All that is known is that three men pulled up to her in a Honda Civic not far from her home in the Pico and La Cienega Blvds area, punched her in the face, and yelled “Trump 2016” before fleeing the scene. This was the most notable act of violence over the painting. She shared that she also received many threats from others. Although she asked for any witnesses to step forward on social media, nobody responded. The media coverage that the case generated resulted in yet more threats of bodily harm. She was later informed that her painting was found to be in violation of the Digital Millennium Copyright Act. She challenged the claim but had to share her personal information to enter the counterplea.

Illma Gore’s Louis Vuitton toilet is the latest work of art from a talented and creative artist. To our knowledge, her $100,000 designer toilet has not gendered anger or other negativism as her previous work has. Loyal Louis Vuitton fans find the golden Vuitton-covered toilet to be a true work of art and a novelty. It’s one of the most beautiful creations in her repertoire. For those of you who have been wondering if Louis Vuitton really makes a designer toilet, the answer is no. They make some of the most desirable bags and luggage that the world has ever seen. If that counts, they’ve had some hand in the creation of the now-famous Louis Vuitton toilet. It is the brainchild and design of Illma Gore who used her creative genius to bring her ideas to reality. If you have a deep passion for everything Louis Vuitton, the toilet was not made by the brand, but the materials used to cover every inch of the lavatory are genuine and authentic Louis Vuitton products. If you have an extra $100,000 lying around you could be the next owner of this extraordinary piece of modern art.