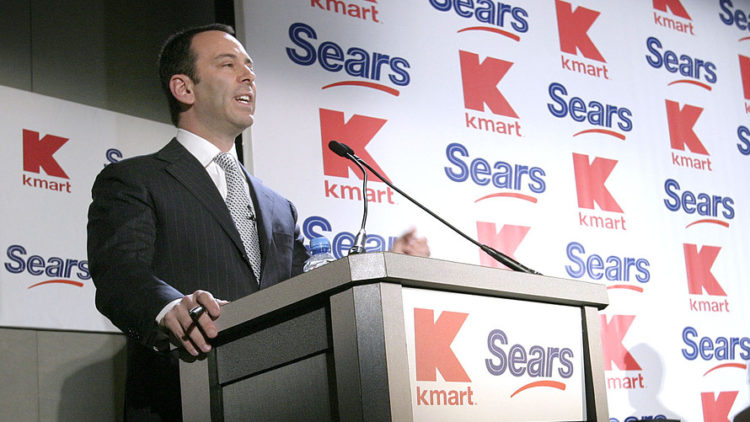 Eddie Lampert is the CEO of Sears. Prior to purchasing the failing company, he was one of the wizards of Wall Street and known for his ambition, his strong work ethic and for his high intellectual capacity. He’s made billions in his lifetime, but his involvement with Sears wasn’t a feather in his cap as a financier. This has turned out to be an interesting situation for him and in case you’re not award of the details of his latest venture, here are 10 things you didn’t know about Eddie Lampert.

Eddie Lampert had a good start on building his fortune. By the time he was just 25 years old he was already widely respected for his high level of intelligence and his strong worth ethic. When just a young man he had the confidence of some of the richest investors around including billionaire David Gefen of Hollywood, Richard Rainwater, Thomas Tisch and Michael Dell. Together, they funded him with over $200 million in startup capital.

2. He made the headlines on The Wall Street Journal by age 28

When Eddie Lampert was just 28 years old The Wall Street Journal listed an article about him on the front page and they referred to him as “the climber.” This was quite a distinction as his business savvy and instincts helped him in amassing a fortune when men more than twice his age were struggling in the same kind of business to make it big.

3. He was featured on Businessweek magazine in 2004

Lampert has long been lauded as a financial wizard. Through the decades he’s been the topic of interest and admiration. When his hedge fund grew to an annualized return of 29 percent, the news was enough to land his face on the cover of Businessweek Magazine in 2004.

Eddie Lampert made it to the Forbes list of the Richest Americans. They ranked him at the 61st riches American out of their top 100 list in 2005. Forbes puts out this ranking every year and at the time that Lampert was on this list in 61st his net worth was estimated at $3.5 billion.

When Kmart went bankrupt, Eddie Lampert purchased the failed company. He merged Kmart with the Sears company which he also had purchased. This was a move that he believed would help to make Kmart more profitable, but although there are still Kmart stores open and conducting business as usual, the brand has never come back to its former glory.

When Lampert purchased Kmart, it was reported that he paid $700 million for it He used money from his hedge fund. At the time it was worth an estimated $5 billion after the merger with Sears.

Edward Lampert is being blamed for the bankruptcy state of Sears. Analysts claim that it was his financial deconstruction of Sears Holdings that is the decision that brought the retailer that was once a giant in the retail industry. Sears Holdings has filed for Chapter 11 bankruptcy after being a successful retailer for over a hundred years and although he’s brilliant in business, he’s not a whiz at leading a company in the retail industry. Both Sears and Kmart failed to adapt to the changes in consumer demands and they both lost their relevancy in a retail environment where people can now order online through a more convenient retail platform.

8. Lampert tried to make both Sears and Kmart multi-dimensional companies

One of the things that experts believe led to the downfall of Sears is the fact that Lampert took the focus off of retail sales and attempted to implement another industry within the store. This was the Allstate Insurance company as well as the Discover credit card which were both subsidiaries of Sears.

Financier Edward Lampert invested billions of his own personal funds into Sears. He was well-intentioned when he set out to become a full-service provider that would try to meet several of their customers needs in one business. It just didn’t work out the way he head planned because the retail portion suffered from inattention to changing trends in consumer demand as well as the popularity of the online competition.

10. Edward Lampert is still a billionaire

Even though Lampert has recently lost billions through the Sears bankruptcy, he is still a very rich man. According to Forbes his estimated net wealth is still sitting at $1.1 billion. He still owns several lavish homes and he’s living in the lap of luxury.